Daniel Libeskind, the world-renowned master-plan architect for the reconstruction of the World Trade Center, first saw the Rockefeller Center Christmas tree as a teenager, in 1961, shortly after he had moved to New York from Poland — though the star was not at all memorable.

Now, after two years of intensive design, Mr. Libeskind, the first architect to design a Swarovski star, has created a memorable piece: a 3-D, 900-pound architectural feat with 70 spikes and three million crystals with LED lighting spots that Mr. Libeskind said would emit rays so that the sculpture can be seen from all angles.

The piece uses double-cone crystals that sparkle more than other types, and it has 70 aluminum components and 140 LED lighting spots, for a radiant glow. 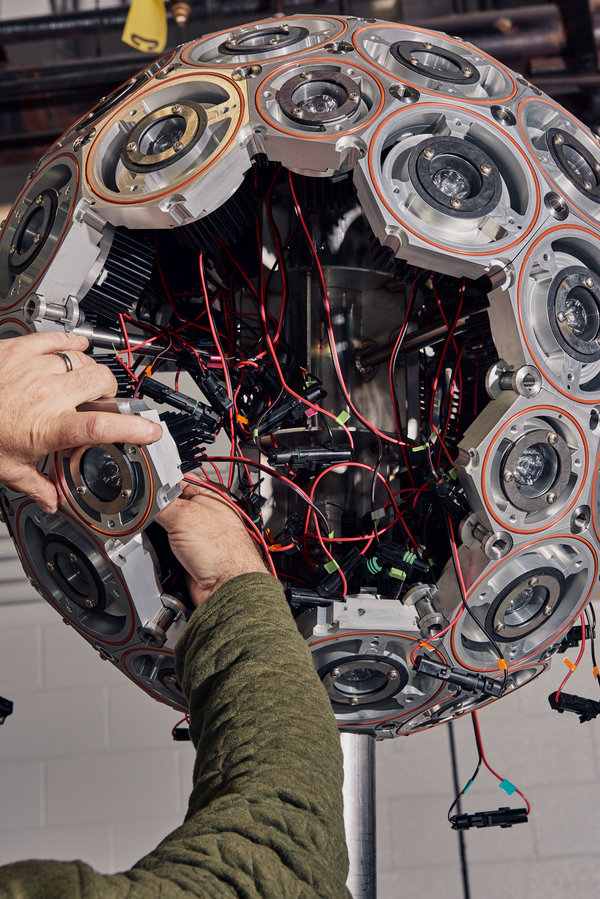 Swarovski introduced a 550-pound star in 2004, and outfitted it even more in 2009. This year’s Libeskind-Swarovski creation may be the most architecturally advanced piece to top the Rockefeller Center tree, which appeared as part of a formalized annual tradition starting in 1933. This year’s lighting ceremony at Rockefeller Center will be on Nov. 28, and the tree will be on view through Jan. 7.

The tree, a 72-foot-tall Norway spruce, was hoisted into place on Saturday in its spot overlooking the skating rink, and will be clad in 50,000 lights — and, of course, the star. “It’s a renaissance of the star,” Mr. Libeskind said, referring to his design of a decoration that has a tradition as a symbol of hope. Inspired by the abstract concept of starlight and Leonardo da Vinci’s studies of geometric forms, Mr. Libeskind said he started out with sketches, which he then had to translate into the three-dimensional form. He also created a model of the star, which will sit in the plaza next to a holiday retail kiosk, so that observers can look at the design up close.

In his process, Mr. Libeskind used complex technology to make sure the geometric shape, formed with glass and crystals, matched up to his sketches. It was a challenge to make the technical piece look organic, he said. Part of the process involved using a special heat fix and glue to apply the crystals to the six millimeter glass.

The Rockefeller Center tree, with its star as a beacon of hope, has endured: In the grip of the Depression, in 1931, workers erected the first known tree in a muddy plaza on Christmas Eve — it was 20 feet tall and draped in garland. The first formal tree went up in 1933, when Rockefeller Center decided to create an annual tradition.

The star has changed forms over the years, whether a spiky burst of colored wood, a silver star or a five-point star outlined in bulbs.

Here are some of the highlights of the trees and their decorations, from the archives of The New York Times.

A 1939 article describes the tree: “It is the biggest set up there since the custom was started and will stand undecorated except for the floodlights now being connected and the silvery gleam of a gigantic star in its topmost branches.”

An 88-foot tree with 800 plastic ornaments, white in the daytime and glowing red, blue, green and gold at night, appeared in the plaza in 1940. This tree came from a strip of forest near the Hyde Park estate of President Roosevelt. Organ pipes of gold lined the walkway.

The star glowed brighter than ever in 1949, according to a Times report: “A white star crowned the shimmering sight and seemed to send glints of fire almost to the top of the seventy-story RCA building in back of the tree.”

In 1951, the tree was adorned with 7,500 incandescent bulbs — red, green and white — and about 2,000 people attended the lighting. This was also a momentous occasion for another reason: the lighting ceremony was televised for the first time, and it featured the Rockefeller Center Choristers and Kate Smith singing Irving Berlin’s “White Christmas.”

In 1955, a four-foot white plastic star was wired to the top before the 65-foot-tall Norway spruce was hoisted into place by crane. A six-story scaffold was erected around the tree, where 20 men would work for a week to decorate it. The lighting: “2,500 seven-watt ‘firefly’ bulbs and 1,400 plastic globes, illuminated with lamps ranging from fifteen to 100 watts.”

Fabric of the City

In 1980, trumpeting heralds led the way as the tree was lighted in 60-degree weather. Announcements of the tree were rare in the 1980s and it made vague appearances in reports, perhaps because it had almost become part of the fabric of the city.

In a 1990 column, Anna Quindlen wrote: “Elsewhere the holidays transform drab Main Streets into Bavarian villages, but in New York the effect is a little like a woman already wearing a bracelet and earrings who decides to add a brooch. The lighted tree towering above skaters at Rockefeller Center.”

The lighting ceremony held extra significance in the shadow of Sept. 11. The first lady, Laura Bush, joined Mayor Rudolph W. Giuliani for the flip of the switch, which bathed the tree in red, white and blue.

“This is really a salute to the heroes, traditions, strengths and unity of the United States of America,” Mr. Giuliani said.

Mrs. Bush’s appearance with the mayor, the Police Commissioner Bernard B. Kerik, Fire Commissioner Thomas Von Essen and Richard Sheirer, the emergency management director, highlighted an evening of patriotic themes and somber references to the attacks on the World Trade Center.

“Dozens of American flags have taken the place of the silver banners that hung near the tree in prior years, and the tree's patriotic color scheme has replaced a larger palate that included green and amber,” a New York Times report said.

A Star Is Reborn

In 2004, the 550-pound crystal Swarovski star replaced a fiberglass one that had been decorated with gold leaf, leading the star to become a veritable piece of art. The glittery design, by the German artist Michael Hammers, was nine and a half feet wide and “fitted with a secret weapon, a glowing light-emitting diode implant that will signal that the star is alive,” The Times reported.

With the first redesign of the Swarovski this year, Mr. Libeskind said he hoped his version of the star could exist as a “microcosm of the city radiating its light in all directions.”