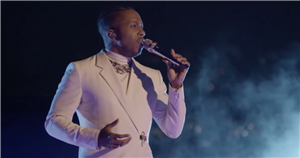 One Night in Miami has one of the best movie soundtracks we’ve heard in a while, so it’s only fitting that Leslie Odom Jr.’s “Speak Now” scored an Oscar nod for best original song. In an effort to switch things up from years prior, the Academy had all the best original song nominees perform their songs in their entirety during the Oscars: Into the Spotlight preshow on Sunday, instead of featuring them during the ceremony. As expected, Odom Jr. delivered a beautiful rendition of “Speak Now,” and the performance alone is Oscar-worthy. Seriously, his voice is just so soothing.

Odom Jr. cowrote the powerful ballad with songwriter Sam Ashworth. “‘Speak Now’ resonated because it sounded like: ‘Listen, your time is precious and you’re not guaranteed a lot of it, so speak right now in this moment. Use your life, use everything that you are given, to make a change and to make a difference right in this moment,'” Odom Jr. previously told Entertainment Weekly. In addition to being nominated for best original song, Odom Jr. is also up for best supporting actor for his portrayal of soul singer Sam Cooke. If he wins, Odom Jr. will officially become an Oscar winner! We’re wishing him the best of luck tonight!