Welcome to Best of Late Night, a rundown of the previous night’s highlights that lets you sleep — and lets us get paid to watch comedy. We’re all stuck at home at the moment, so here are the 50 best movies on Netflix right now.

The Man Who Wouldn’t Leave

He may be out of the White House, but late night isn’t done with Donald J. Trump, especially now that proceedings for his second impeachment trial are officially underway.

“We’ve still got a few loose ends from the last administration we’ve got to clear up, like inciting a murderous mob to attack the Congress and overthrow democracy,” Stephen Colbert said. “Just bits and bobs.”

“Earlier today, all 100 senators were sworn in as jurors for Donald Trump’s upcoming impeachment trial, which starts on Feb. 8. The trial is to determine if the attack on the Capitol by thousands of people wearing flags that said ‘Trump’ and hats that said ‘Trump’ is the fault of — get this — Trump.” — JAMES CORDEN

“Today, only five Republicans voted in favor of the trial, which means there’s no chance Trump will be convicted. Even Mitch McConnell, who specifically said Trump provoked the crowd, voted against it. I knew we should have been suspicious when he did the right thing. That was a sign.” — JIMMY KIMMEL

“Now, to get a conviction, the House is going to have to convince 17 Republican senators that the former president incited the riot. Even though they were all hustled out through secret tunnels to keep them from being murdered by the president’s own bloodthirsty, fascist squad of goons, they’re on the fence.” — STEPHEN COLBERT

“This is the tough-on-crime party. This is the party that investigated Benghazi for over two years — we still don’t know what Benghazi is. This is the man who still hasn’t admitted he lost the election. [imitating Republicans] ‘Move on, it’s been almost a week. We’ve got to move on from this.’” — JIMMY KIMMEL

“Truth be told, 18 years ago we were on live after the Super Bowl, our guests were George Clooney, Snoop Dogg and Coldplay. Tonight, I’m doing a show for 20 reluctant staff members and my guest is my cousin,” Kimmel said.

Kimmel also dug up his first-ever Trump joke, prefacing the clip with, “Yes, it is about his hair.”

“Speaking of the former president, sources in touch with Trump have said he’s, quote, ‘bored out of his mind.’ Well, he was already out of his mind, so I guess now he’s just bored.” — JIMMY FALLON

“Apparently, playing 36 holes of golf every day isn’t as exciting when you’re not ignoring a global pandemic.” — JIMMY FALLON

“But today Trump’s aides were trying to cheer him up. They were like, ‘Good news, sir, your trial starts in two weeks.’” — JIMMY FALLON

“According to a source familiar with the situation, Mar-a-Lago has become a ‘sad’ and ‘dispirited’ place since the ex-president moved in. As opposed to before he moved in, when it was hailed as the number-one luxury Covid hot spot where you can enjoy room-temperature chowder while a Chinese spy loads malware onto your phone.” — STEPHEN COLBERT

“But with the ex-president back, the mood has gotten so dark that ‘a lot of people have quit Mar-a-Lago.’ For Pete’s sake, he’s been there for six days! Imagine what a Donny Downer he must be for people to already throw in the towel.” — STEPHEN COLBERT

Seth Meyers roasted the iPhone’s screen time report and the forthcoming Samantha-less “Sex and the City” reboot on Tuesday’s “Ya Burnt.”

Billy Crystal will catch up with Stephen Colbert on Wednesday’s “Late Show.” 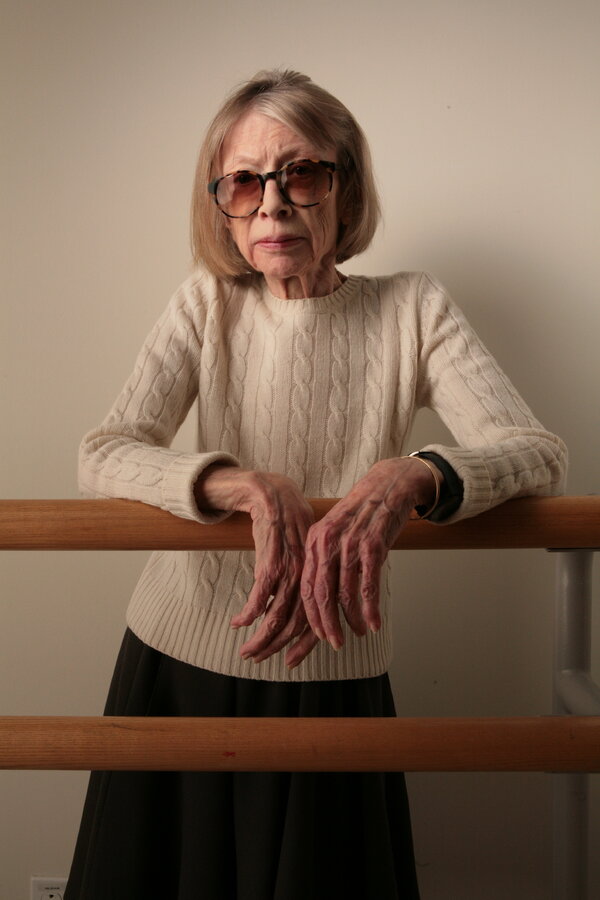 Joan Didion’s new essay collection, “Let Me Tell You What I Mean,” features 12 previously published pieces ranging from the 1960s through the year 2000.