Stephen Colbert said that the midterms looked less like a red wave of Republican victories and more like “a pink trickle.” 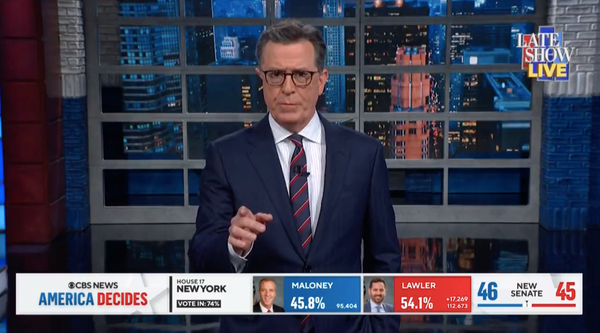 Stephen Colbert and Jimmy Kimmel took their shows live on election night, sharing midterm results as they came in during their monologues.

“Though the G.O.P. is picking up seats in the House, so far it does not look like a red wave,” Colbert reported. “Perhaps — perhaps too early to tell. Perhaps a pink trickle. They should really have that checked out.”

“Not only are we live, our audience tonight — this is exciting — our studio audience is made up entirely of Herschel Walker’s children.” — JIMMY KIMMEL

“In the Florida governor’s race, Democrat Charlie Crist has been defeated by MAGA wannabe and 2024 hopeful Ron DeSantis. And now, in accordance with Florida law, Charlie Crist will be forced on a plane and flown to Martha’s Vineyard.” — STEPHEN COLBERT

“You know, Matt Gaetz easily won his seat in Florida. He was re-elected. Florida’s a state in which being an alleged sex offender makes you an experienced public servant. It’s not necessarily frowned on. Matt is going to wait to celebrate until prom night, which is sweet.” — JIMMY KIMMEL

“Now, one of the biggest races that everyone has been watching is in Georgia, between Raphael Warnock and Herschel Walker, and right now they are neck and almost entirely neck.” — STEPHEN COLBERT

“It is so tight, this race could be decided by a margin of error of plus or minus Herschel Walker’s secret children.” — STEPHEN COLBERT

“The Colorado governor’s race goes to incumbent Jared Polis, who earlier this year — earlier this year, signed an exclusive order protecting marijuana users’ rights. So his victory was secured due to high voter turnout.” — STEPHEN COLBERT

“And then down in North Carolina — this was expected — in the North Carolina Senate race, we got word Republican Ted Budd has beaten Cheri Beasley, which is too bad for a couple of reasons. One was I was really looking forward to the headline, ‘Cheri Beasley Smokes Budd.’” — STEPHEN COLBERT

“The Crown” creator Peter Morgan chose Imelda Staunton to play Queen Elizabeth II for the final two seasons of the series because of her “vulnerability and strength.”