When Saba Arain arrived in New York from Pakistan in 2009, she left behind a teaching career and a large family. The only person she knew in the city was her husband.

About a year later, after giving birth to a son, Ms. Arain was ready to start teaching again. They had a family now, and she wanted to contribute. “I wanted to work,” she said in an interview this fall.

In Pakistan, Ms. Arain had taught kindergarten and then high school physics in Sindh Province. But when she tried to find a teaching job in New York, she was told that her English was not good enough.

“We are educated. We have degrees. But with a language problem, no one will accept my degree,” Ms. Arain said. “Nobody gives you a chance if your English is not good. If you can’t speak it or don’t understand it, how will they give it to you?”

Her husband, Muhammad Zahid Arain, who had come to the United States in 2000, suggested she use libraries to study the language.

“It was a very painful time,” she said. “But my husband, he’s very nice and took care of me and supported me and said, ‘Saba, people want to come here, and now our baby is born, and he will get a good education here.’”

Almost a decade later, she is nearly fluent.

The Arains live in a basement apartment in the Bronx. Their son, Jibril, is 8. This fall, Ms. Arain began a new job serving lunch in one of New York City’s public school districts. Her husband drives for Uber, and together, they make it work.

In Pakistan, Ms. Arain had been her mother’s caretaker after a stroke. The two were very close and would talk every day when Ms. Arain came to New York. Just four months after Ms. Arain’s arrival, her mother died, adding to her sense of isolation. 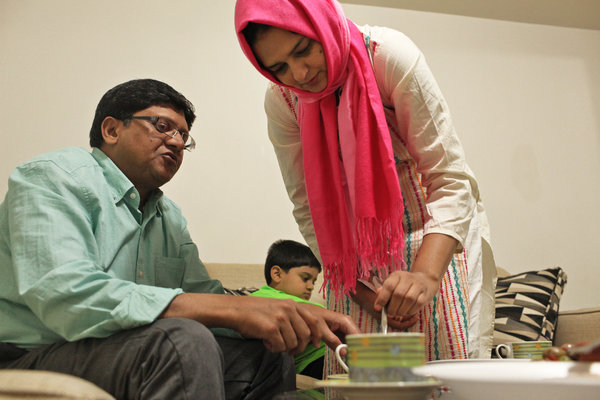 Over three months, the women learn the ins and outs baking so that they can find jobs in the industry.

“They gave me so much confidence,” Ms. Arain said. “They pushed me and were very nice. Everyone was so cooperative with me.”

In addition to learning to navigate the subway system in New York, Ms. Arain’s new path introduced her to baking. Before she moved to New York, she said, she did not even know how to make eggs or tea.

“I was the youngest in my family,” she said, growing up in a family with 10 siblings, “so I had no idea how to make anything. Before Hot Bread Kitchen — nothing. But I want to do work, I want to do something for my family.”

Through the Community Service Society, one of the eight organizations support by The New York Times Neediest Cases Fund, Ms. Arain received a $121 MetroCard in February to pay for her trips to baking classes.

With her new skills, Ms. Arain landed a job at Whole Foods, then later was hired by District 11 in the Bronx, where she works in a different school each day of the week.

Someday, she hopes to return to teaching. “This is my big wish,” she said.

Ms. Arain is still working to improve her language skills and frequently carries an English conversation book with her.

“My son says, ‘Mom, your English is not good,’” Ms. Arain laughed. “Who helps with your homework?” Ms. Arain asked Jibril, sitting next to her on the couch. He reluctantly pointed his finger toward her.

Jibril often asks when the family will move into a bigger house, where he can have his own room. His parents tell him they will buy a house when they have enough saved. It’s challenging because they are also sending money to Mr. Arain’s family in Pakistan and thinking about saving for Jibril to go to college.

“I want to work more,” Ms. Arain said. “I really want to buy a house for my family, for my Jibril, because sometimes he feels so bad. He doesn’t understand.”

For now, they make do with their basement apartment. But Ms. Arain has aspirations: She wants to build her son a treehouse someday.