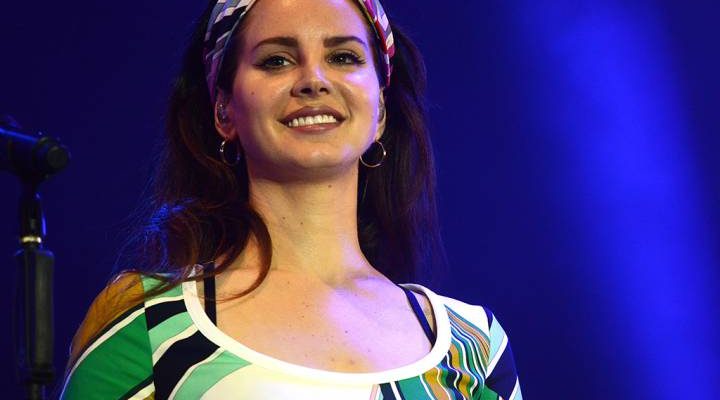 The 33-year-old invited her producer and partner-writer, Jack Antonoff, onstage to play his accompanying piano arrangements.  The duo were at the BAM Harvey Theater to help promote the newly announced models of the iPad, Mac Mini and MacBook Air.

They followed up with a haunting performance of her previously released single, Venice B***h.

Before kicking off into the sombre new track, Del Rey joked that she couldn’t tell the audience the name of her album because she was advised “not to swear” by Apple executives, which also meant she was forced to censor the lyrics for Venice B***h. Instead, she sang “Venice chick.”

Prior to these two songs, the Lust for Life singer (not to be confused with Iggy Pop) put out Mariners Apartment Complex as the lead single. Since its release, she has teased her fans with a number of other highly-anticipated cuts.

In a recent Instagram post, she is seen lip-syncing along to a tune entitled, Sylvia Plath. Shortly after this, she posted a snippet of lyrics to Twitter.

The “Lizzy Grant” fandom exploded across all media platforms.

Her supporters were over the moon. One fan even resorted to calling himself Del Rey’s child. He addressed the pop star directly and wrote, “I love Sylvia Plath. I can’t wait for Norman F**king Rockwell, mom.

With three new singles and an upcoming album by her side, it appears the Sad Girl is ready to get back on top. Her first show of 2019 was recently announced for the Summer in Dublin, Ireland.

As of this writing, Del Rey has no scheduled Canadian tour dates. It is expected that the release of her sixth studio album will coincide with a complete world tour announcement.

Norman F**king Rockwell is expected for an early 2019 release under Polydor and Interscope Records.