Kim Kardashian’s daughter North West isn’t the only one getting creative with makeup on TikTok.

The nine-year-old daughter of Kim and Kanye West made headlines this month as she appeared in videos with her famous mum using makeup to look like dad Kanye.

Now the mum-of-four has shown off her own skills – er, sort of – as she transformed herself in a new makeup tutorial video.

In a video which, to no surprise has gone viral, Kim starts out looking like her usual self with her usual makeup, before tying her hair up into a messy top bun.

She then attacks her eyebrows with thick black tint, making them several shades darker – and thicker – than before, and piles on thick, orange-tinted foundation.

Finishing the look, Kim used layers and layers of bright highlighter which she does not properly blend, and paints her lips the same colour as her skin.

The result? Well, plenty of girls you went to school with back in the day. 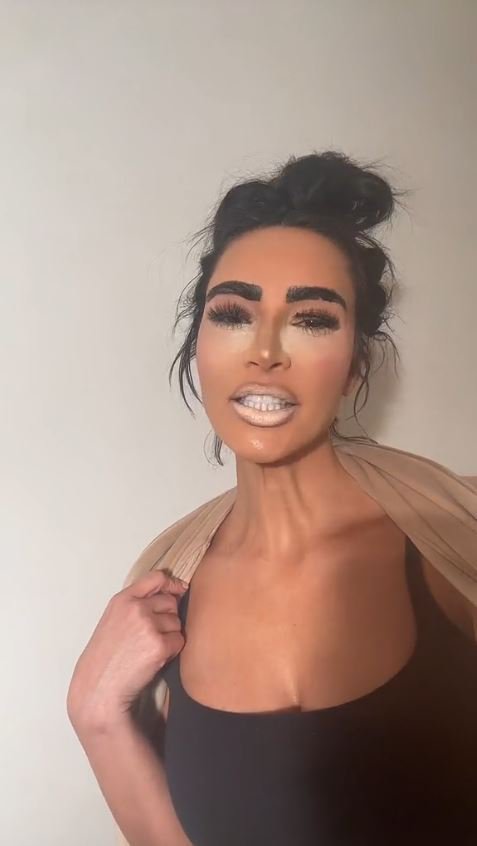 It seems Kim was going for a certain look, as she performed the tutorial to British artist Mille B’s song M to the B, which became a viral sound on TikTok.

Known as the ‘Essex Girl’ trend, the challenge sees TikTok users do a makeup tutorial with orange makeup and thick black eyebrows while Millie’s track plays in the background.

And while Kim is far from the first to do it, her new clip is already among the most popular, having amassed over 2 million likes in just a few hours.

The video spread on Twitter, with fans in stitches seeing the glamorous reality star getting in on the trend, with one branding her ‘iconic’.

Another admitted she ‘didn’t have Kim Kardashian doing a 2002 British schoolgirl makeover on my 2023 bingo card,’ while another said ‘This is the last thing I thought Kim Kardashian would do on TikTok.’

One joker said the video had ‘just ended British culture,’ while others praised it as ‘a serve’ and ‘so camp.’

Kim’s go at the trend comes after fans were genuinely impressed by North’s makeup ability, with her reality star mum previously saying she was extremely interested in special effects makeup.

In several videos posted to their shared TikTok account this month, North had contoured her face to look like Kanye, and even added stubble and a sharp hairline, as Kim posed alongside her.

While dad Kanye is totally against the youngster being on TikTok, Kim relented somewhat and allowed her to set up a joint account with her, with comments disabled and the mum-of-four keeping an eye on things.