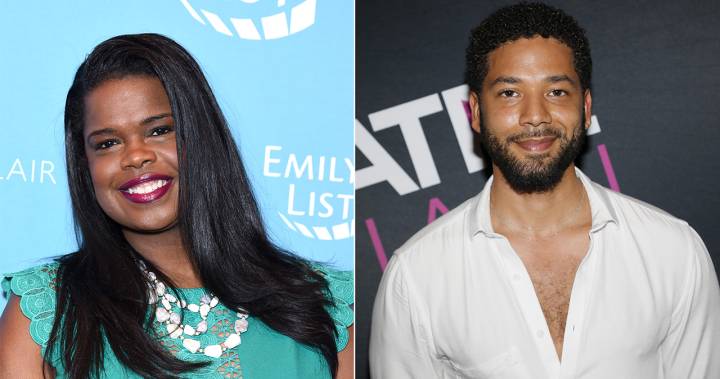 Text messages show the Chicago prosecutor whose office handled the case of Empire actor Jussie Smollett told her top deputy that Smollett was a “washed up celeb” who was overcharged.

The office of Cook County State’s Attorney Kim Foxx released thousands of documents from the investigation late Tuesday in response to media requests.

Smollett was initially charged with 16 counts alleging he lied to police when reporting he’d been the victim of a racist, homophobic attack in January. Police insist he staged the attack.

The documents obtained by the Chicago Tribune include a text conversation between Foxx and Joseph Magats, the first assistant state’s attorney.

Foxx said in February that she was recusing herself. But she weighed in on March 8, sending the text to Magats that said: “Sooo……I’m recused, but when people accuse us of overcharging cases…16 counts on a class 4 (felony) becomes exhibit A.”

Magats agreed that the indictment could be seen as “excessive.” Foxx then voiced her concerns by comparing Smollett’s indictment to R. Kelly‘s.

“Pedophile with 4 victims, 10 counts. Washed up celeb who lied to cops, 16 (counts),” she wrote. “On a case eligible for deferred prosecution I think it’s indicative of something we should be looking at generally. Just because we can charge something doesn’t mean we should.”

Foxx said in a statement Tuesday that she had reached out to Magats after Smollett’s indictment “to discuss reviewing office policies to assure consistencies in our charging and our use of appropriate charging authority.”

“I was elected to bring criminal justice reform and that includes intentionality, consistency, and discretion. I will continue to uphold these guiding principles,” Foxx added.

Last month prosecutors dropped all 16 felony charges against Smollett. The Empire actor agreed to forfeit $10,000 in bail and do community service.

Foxx’s office declined to release internal Smollett case files, noting the case had been sealed by a judge. The office also gave no detailed explanation for why the case was abandoned.

Smollett has maintained his innocence and insisted he was attacked.

Chicago Mayor Rahm Emanuel and others have criticized the decision to drop charges against Smollett accusing him of filing a false report to police that he was the victim of a racist, anti-gay attack in January.

“Ensuring that I and my office have the community’s trust and confidence is paramount to me, which is why I invited an independent review of this matter,” Foxx said in a statement. “I welcome this investigation and pledge my full co-operation and the co-operation of my office.”

Cook Country Inspector General Patrick Blanchard will be conducting an investigation of how Foxx’s office handled the case.

The Chicago Tribune first reported Foxx’s request Friday and reported Blanchard set a letter to Cook County Board President Toni Preckwinkle and other county leaders informing them of Foxx’s request.

Blanchard wrote that Foxx asked for a review “of the circumstances surrounding the resolution of criminal charges formerly pending against Jussie Smollett.” He wrote that his office would proceed with the review.

The city of Chicago filed a civil lawsuit Thursday in Cook County court against Smollett, who is black and gay, in a bid to recoup the costs of investigating his claim that masked men beat him Jan. 29 in Chicago, shouted slurs and wrapped a rope around his neck.

The suit comes after Smollett refused the city’s demand that he repay it $130,106. A spokeswoman for Smollett’s legal team said they had no comment on the lawsuit or Foxx’s request for the inspector general review.