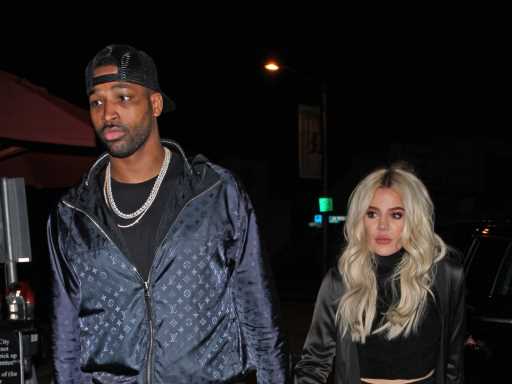 Fans have been eagerly awaiting the April 14th series premiere of The Kardashians on Hulu and the trailer that dropped on Monday proved that it’s going to be worth the wait. The glossy new look of the show only adds to the drama that the entire clan goes through, including Khloé Kardashian’s on-again, off-again relationship with Tristan Thompson.

We already know that their reunion is going to go poorly (see the current baby drama with Maralee Nichols), but it’s the fascinating behind-the-scenes look viewers are getting into their conversations about trust that have us side-eyeing Thompson’s intentions all along. A clip has Khloé setting the stage for the messiness that is to come in their relationship, sharing, “Tristan and I are complicated.” Then the camera jumps to a heart-to-heart discussion of her saying, “Trust takes time” while the athlete looks like he would rather be anywhere else at that moment. He looks uncomfortable and downright shifty as he avoids all eye contact with Khloé — the scene should have fans screaming at the screen.

But it’s also Khloé who dishes out nothing but straight facts to her family, asking later in the trailer, “Why are we always making excuses for the people that traumatize us?” Perhaps she’s talking about Thompson at that moment (we don’t know yet), but it could also relate to sister Kim’s tumultuous divorce with ex-husband Kanye West. Even though this show isn’t playing out in real-time, it’s giving more insider access to what’s happening behind closed doors.

The anticipation is real for the new show, and everyone is looking forward to it — except Thompson. He would probably rather leave the details of his latest affair off TV, but that’s what he signed up for.

Before you go, click here to see all the celebrities who have admitted to cheating on their partners.