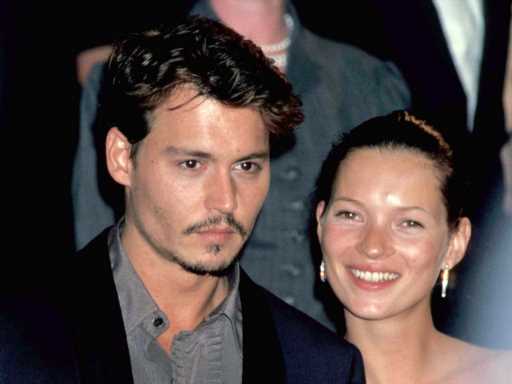 When Kate Moss testified at Johnny Depp’s defamation case against ex-wife Amber Heard last week, many fans thought her support possibly swayed the jury into the Pirates of the Caribbean star’s favor. Moss explained that she had never experienced any physical abuse at the hands of Depp when they dated in the late 1990s, and now, she is reportedly sticking by him in friendship beyond her videoconference testimony.

The supermodel apparently showed up to Jeff Beck’s concert at the Royal Albert Hall in London on Tuesday night to watch Depp play alongside the musician, according to the Daily Mail. She arrived early to the venue, slipping into the stage-door entrance, and then staying for an after-party with Sharon Osbourne. It sounds like #TeamJohnny is starting to enroll new members after several years of mostly silence from his pals in the Hollywood community.

Moss was called into the Depp-Heard fray after the Aquaman actress referred to a longstanding rumor that Depp had once pushed his ex-girlfriend down the stairs. “I don’t hesitate. I don’t wait. I just, in my head, instantly think of Kate Moss and stairs,” Heard testified. This statement opened the door for Depp’s lawyers to bring in Moss to refute the story and recall her accidental fall down the stairs at a Jamaican resort 25 years ago that sent Depp “running back to help” to make sure she got the medical assistance she needed. “He never pushed me, kicked me or threw me down any stairs,” Moss confirmed.

By showing up at the Beck concert, it’s just one more sign that Moss is firmly in Depp’s corner. It’s unclear how the jury will vote in this case, but some old friends are signaling that they have his back.

Before you go, click here to see the most important celebrity lawsuits over the past 15 years.