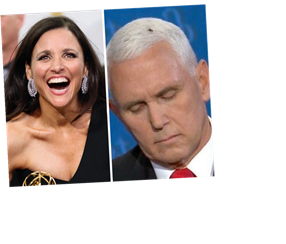 A fly created one of the buzziest moments of Wednesday night’s vice presidential debate between Vice President Mike Pence and Sen. Kamala Harris after it landed on Pence’s head.

The entire episode ― in which the fly stayed on Pence’s head for about two minutes ― seemed like a scripted moment straight out of Hollywood.

But it wasn’t, and that’s why Julia Louis-Dreyfus is so upset.

“Well, I really wish we had thought of this on @veephbo,” the actor said on Instagram Wednesday night, alongside a photo of the fly perched atop Pence.

“Who is controlling that fly?” she quipped.

Well, I really wish we had thought of this on @veephbo – who is controlling that fly?

Fans chimed in with comments on her Instagram post, calling the fly a “national treasure” and an “American hero,” while screenwriter and actor Lena Waithe said the fly “felt like a bit.”

“Late Show” host Stephen Colbert let loose on his show after fly-gate, joking that Pence was “so full of crap, he’s attracting flies.”

“All jokes aside, thoughts and prayers to that fly’s family. It’s got to quarantine for two weeks now,” he said, referencing the coronavirus outbreak in the White House. “We’ve gotta get that fly to Walter Reed.”

Other celebrities also got in on the fun: