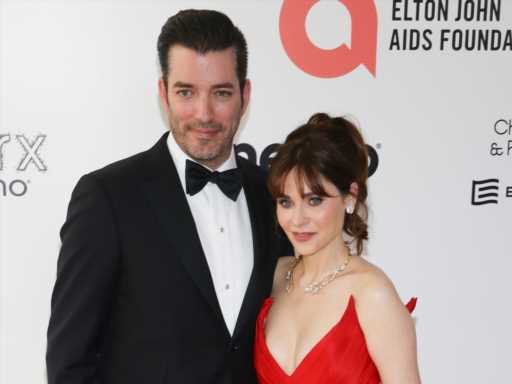 Jonathan Scott is not only the proud boyfriend of Zooey Deschanel, but he’s also her number one fan (and potentially muse, according to his new post!) On June 18, Scott posted a behind-the-scenes video of Deschanel singing on stage, with him having a total loving fangirl moment. He posted the adorable video with the caption, “🎶 Umm…I think she’s singing it to me 😃❤️ (voice of a choir of angels).”

In the video, Scott takes a selfie video of himself smiling and fawning over his girlfriend as she sings her heart out on stage with her soulful sound. While we’re obsessed with this adorable display of affection, their fans are losing it.

One of the top comments read, “It’s so good to see you happy! 💜” Another one added, “Jonathan having a total fangirl moment 😉😉😉 so sweet 💖” — and these are two of hundreds of loving comments.

In case you didn’t know, Deschanel is not only a gifted actress but a very talented singer.

She’s part of the beloved duo She & Him, where she performs alongside songwriter M. Ward. The two are currently on their long-awaited “Melt Away” tour, and it seems they’ve made a groupie out of Scott.

Scott and Deschanel met back in Aug. 2019 after filming an episode of Carpool Karaoke: The Series and soon got together the following year. Since then, they’ve been on Cloud 9, traveling together and renovating their dream home.

Before you go, click here to see all the celebrity couples who met on set.