Two weeks ago a young American made a doomed mission to North Sentinel Island, a speck in the Bay of Bengal and home to perhaps the most isolated people on earth — all 50 or so of them.

Ever since he was a boy, John Chau, an evangelical missionary with an acute case of wanderlust, dreamed of spreading Christianity to the people on North Sentinel. Lying far-off India’s coast in the Andaman Island chain, North Sentinel is about the size of Manhattan, though not exactly its cousin.

The people there are hunters and gatherers. They follow a lifestyle tens of thousands of years old. No outsiders know their language. We don’t know where they came from. We don’t even know what they call themselves — definitely not the “Sentinelese,” as some people do.

They have attacked just about anyone trying to step onto their shore, appearing virtually naked and firing arrows. Then they retreat from the beach and melt into the forest. Why? That’s a mystery, too.

Many of us no doubt marvel that in the 21st century such a place exists. As Adam Goodheart wrote in a beautiful piece years ago in The American Scholar, North Sentinel “had somehow managed to slip through the net of history.”

But Mr. Chau’s widely reported death has dragged this island out of obscurity and raised some fundamental moral questions. How should we, in the modern world, interact with the last of these very fragile groups? Is it better to stick the island in a glass museum case, which the Indian government has essentially done, and try to keep anyone from interacting with the islanders?

Or is that paternalistic, denying the people there the same things that just about the whole world has agreed it wants, like education, health care and technology? The same issues routinely come up in the Amazon, where a few fragile groups still exist, though they’re not quite as isolated. Every day, loggers, anthropologists, traders and tourists get a step closer to them.

What Mr. Chau, 26, did clearly did not work. He came with gifts in hand (scissors, safety pins, a soccer ball) and the islanders killed him. The police can’t even get his body back. It is still lying on the beach. What he did was also illegal. The Indian government prohibits contact, deeming the islanders an “ultrasensitive human treasure.” Perhaps that is paternalistic; perhaps it is morally sound.

Mr. Chau saw it as his moral imperative to get to the island. In his evangelical worldview, it is an act of compassion to introduce people to Christianity; that is the only way to save them from burning in hell. It’s called the Great Commission, and North Sentinel represented the greatest commission, since no one we know of had ever tried to convert the islanders. Since his death, many people, including fellow missionaries, have called him naïve, delusional and reckless. “I have zero sympathy for Chau,” said David Schmidt, a former evangelical missionary. His actions, Mr. Schmidt said, “were not only foolhardy, they were criminal.”

And speaking of crimes, was it criminal for the islanders to kill Mr. Chau? The Indian police have opened a homicide case. Another moral question is whether any islanders should be punished for Mr. Chau’s death.

Anvita Abbi, a linguistics professor with deep knowledge of North Sentinel, said the islanders have a right to defend their territory. She said it’s no different from the Stand Your Ground laws in the United States that allow people to shoot intruders.

“In America, if you enter someone’s garden they come out with guns to shoot you for trespassing,” she said. “Here, these people have been clearly telling us that please don’t come near us, we don’t want to meet you. And yet we keep on barging into their areas, bothering them, and that risks even the tribe’s death.”

Her argument is basically self-defense. Because of their isolation, she said, the islanders have no immunity to infections and diseases of the outside world. Even a common cold could kill them. She said that Mr. Chau put these people in grave danger and he should have never visited.

“There is no question that this attempt to make contact was totally wrong and a major violation of their human rights to autonomy,” he said. “Outsiders need to respect their wishes and treat them with dignity as fellow human beings. Respect means we don’t assume to know better how they should live.”

To me that is the operative question. How do they want to live? Can outsiders presume they don’t want contact without communicating with them? Where does their hostility come from? Maybe it’s from an old grudge (in the 19th century, a young British naval officer kidnapped a few of the islanders and some soon died). Maybe it’s from superstition or something else.

Kim Hill, an anthropologist at Arizona State University, thinks total isolation on a tropical island is a bit of a fantasy anyway. He said that it’s “unwise and inhumane to forcibly keep these groups isolated by building protective fences around them.”

First, if a population gets too small and isolated, like the people on North Sentinel, it will probably become extinct. Contact may be dangerous, but so is no contact. Second, some type of encounter with an outsider is inevitable, Mr. Hill said, and “accidental contact is a disaster waiting to happen.” North Sentinel is isolated, but it’s only 30 miles or so from Port Blair, the region’s growing capital. How long can the Indians keep people away from the island? Mr. Hill’s solution is to learn what the islanders want so that they can make the decision about their future.

“Humans are an extremely social species,” he said. “No groups want to live isolated forever. They do it out of fear.”

But how does one start a dialogue with a group of people who greet you with a drawn bow? For this, I consulted one of the few people who have actually set foot on North Sentinel. Vishvajit Pandya is an Indian anthropologist who made three trips there. In 1998, he accompanied a government team that presented the islanders with several bags of coconuts. The islanders accepted them without hurting anyone, though they then made obscene gestures.

“It takes a certain amount of courage and hard thinking,” Mr. Pandya said about the next step. “It has to start with gift giving, years of gift giving, then the language has to be learned through this gift giving. You have to make an effort to engage in dialogue. It’s not easy, but everybody is entitled to think about their future, that is the first right, the right to have rights.”

When I asked Mr. Pandya whether the island was beautiful — the few photos I’ve seen show tantalizing white beaches and Windex-blue seas — he snapped back: “No, it’s filthy. It’s disgusting. Tell people not to go.”

“It’s actually a very interesting landscape,” he said. “The winds are so strong, the trees grow like a Mohawk, all the same height. No tree grows higher than the other.” 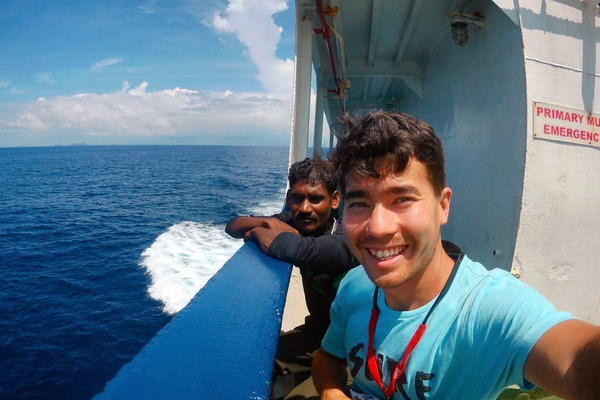 Jeffrey Gettleman is the South Asia bureau chief, based in New Delhi. He was the winner of a Pulitzer Prize in 2012 for international reporting. @gettleman • Facebook