New Yorkers are never wanting for Handel’s “Messiah” during the holidays. It’s on the calendar of every major concert hall and may be the only musical work performed in all five boroughs this month.

Nothing could dethrone Handel’s oratorio, but worthy alternatives in choral music are out there. (And I’m not just talking about Bach.) The Metropolitan Museum of Art recently offered two modern holiday oratorios that are intimate, affecting and quietly rich with activism: John Adams’s “El Niño” and David Lang’s “the little match girl passion.”

[See what our critics chose as the best classical music events of 2018.]

[And listen to our favorite recordings of the year.]

As part of the soprano Julia Bullock’s yearlong residency with the museum, “El Niño” came to the Fuentidueña Chapel at the Met Cloisters on Friday in the program “Nativity Reconsidered” — though a more appropriate title would have been “Nativity Condensed.” This was the premiere of a new version of the work, trimmed by an hour and arranged (by Preben Antonsen, with contributions by Chad Cannon and Christian Reif) for four singers and a small ensemble, conducted by Mr. Reif.

Such a small scale may sound nothing like “El Niño,” a sweeping, nearly two-hour Nativity oratorio written for vocal soloists, a trio of countertenors, a full orchestra and choir, and a children’s chorus. In her program notes for the Met, Ms. Bullock called it one of the greatest collaborations of Mr. Adams and Peter Sellars, who compiled the libretto’s text and directed the work’s staged premiere in 2000.

I’d tend to agree with Ms. Bullock. The daunting “El Niño” doesn’t get performed often, which is a shame because it may be the peak of Mr. Adams and Mr. Sellars’s partnership: the awesome choral and orchestral writing of “Nixon in China,” and a poignant found-text libretto that shows a restraint lacking in later operas like “Doctor Atomic” and “Girls of the Golden West.”

The abbreviated “El Niño,” however, showcases just a slice of the work’s greatness. Gone are the choruses (even the dizzying Part I finale “The Christmas Star”) and some of the most earthshaking instrumental passages. What remains are about a dozen of the oratorio’s more meditative and lyrical numbers that dramatically streamline the Nativity story. It’s not necessarily worse — just unfortunate if you know what else is possible with this piece.

Some of the sections were spoken where they used to be sung, giving Friday’s performance the feel of a Catholic mass’s readings and responses. The concert began with Ms. Bullock, standing under an apse depicting the Archangel Gabriel’s annunciation to Mary, reciting an English translation of Rosaria Castellanos’s poem “La Anunciación” over a cello drone. Joined by the mezzo-soprano J’nai Bridges, she sang “Se habla de Gabriel,” a melodic duet with a coda by the bass-baritone Davoné Tines.

With these three singers, “El Niño” was in safe hands. They starred in “Girls of the Golden West” last season at San Francisco Opera; Ms. Bullock was also a standout in the recording of “Doctor Atomic” released this year. So they were well equipped to navigate Mr. Adams’s vocal music: its exquisite and enveloping lyricism, but also the way it treats syllables as musical notes to be repeated and rearranged, creating an entire breathless passage from a single word. (The fourth soloist was the countertenor Anthony Roth Costanzo.) 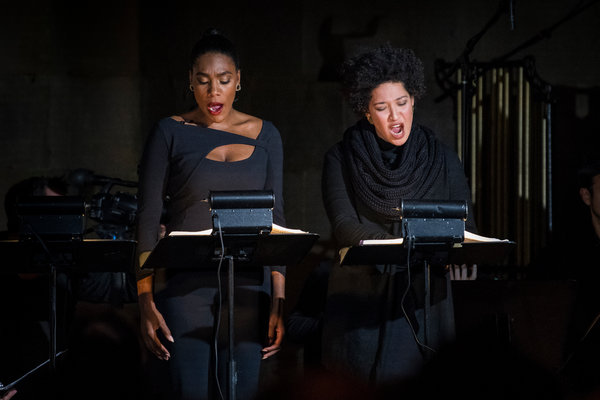 Ms. Bullock, her voice by turns warm and teeming with urgency, felt at times larger than the chapel itself: towering in the “Magnificat” and chilling “Memorial de Tlatelolco.” And the way she programmed “El Niño” elevated an already-revisionist work to something much more powerful.

She put together the concert with help from the fledging yet formidable American Modern Opera Company, which supplied instrumentalists. (She is a member, as are Mr. Tines and Mr. Costanzo.) While “El Niño” reclaims the Nativity story for women — shifting the focus to Mary and motherhood, and incorporating texts by female poets from Latin America — Ms. Bullock went a step further by bringing the piece, and performers of color, to a space typically associated with European history and power.

There is subtle activism, too, in “the little match girl passion” (2008), which the Choir of Trinity Wall Street — led by Julian Wachner, a master of “Messiah” as well — recently sang at the Met’s Grace Rainey Rogers Auditorium. Mr. Lang’s Pulitzer Prize-winning oratorio blends the form of Bach’s “St. Matthew Passion” with Hans Christian Andersen’s story about a poor girl who tries to sell matches on the street but is ignored and freezes to death, for a haunting portrait of homelessness during the holidays.

Mr. Lang’s music here is direct but not forceful, and simple enough to linger in your mind long after a concert. In the passages where the Little Match Girl’s story is told, the text comes through with crystal clarity; there is no way to avoid the details of her sorrowful tale.

The small ensemble of Trinity singers, some doubling as percussionists, responded to the score in kind, performing with compassion. Mr. Wachner kept them so quiet, his hands almost never came above his waist while he conducted; by contrast, he practically danced through Handel’s spirited Dixit Dominus in the evening’s second half.

Like the reduced “El Niño,” Mr. Lang’s piece is brief. In the future, the two could make for a stirring double bill. One oratorio would prompt you to reconsider the story of Christmas; the other, to think twice before ignoring someone in need as you head home.