Welcome to Best of Late Night, a rundown of the previous night’s highlights that lets you sleep — and lets us get paid to watch comedy. We’re all stuck at home at the moment, so here are the 50 best movies on Netflix right now.

Oops, He Did It Again

The House impeachment managers wrapped up their case against Donald Trump on Thursday, but the late-night hosts weren’t optimistic about the verdict.

“It’s kind of like ‘The Empire Strikes Back,’” Jimmy Kimmel said. “We already know how it ends, but we’re watching it anyway.”

“Democrats could — at this point, they could produce a video of Trump looking straight into the camera saying ‘I, Donald Trump, hereby incite this insurrection of violence,’ and most of the Republican senators would be like, ‘But where’s the proof? We didn’t see proof.’” — JIMMY KIMMEL

“Yep, their presentation was so emotional and compelling that Republicans almost looked up from their phones.” — JIMMY FALLON

“Most of them are lost causes. Like Tom Cotton, Bill Hagerty — these guys, they would eat the hair out of Donald Trump’s shower drain. But a few of them, who knows? Maybe three ghosts will visit them in the middle of the night tonight.” — JIMMY KIMMEL

“These senators are a jury for a trial of the president, but instead, they’re acting like bored middle schoolers. What do Democrats have to do to make this interesting for them, bring in one of those math teachers who raps everything? ‘My name is Doug and I’m here to say, democracy was threatened in a major way.’” — TREVOR NOAH

“Here’s the thing: if Americans cared as much about America as we do about Britney Spears, this would be a really great place to live.” — JIMMY KIMMEL

“Trump’s argument is basically, ‘Yes, maybe I did shout “fire” in a crowded theater, but the people trampling each other were acting on their own.’ And these people who acted on their own, I wonder if you can use stupidity as a defense? You can plead insanity, why not?” — JIMMY KIMMEL

“Essentially they were using Trump’s own words against him. What they are arguing is that Trump — and I promise this is the only time you will hear me say this — knew what he was doing.” — JAMES CORDEN

“Guys, come on, don’t call Trump in the middle of the riot. You just saw him at the rally a couple hours ago — you gotta be chill. You call the morning after the insurrection, you know? You gotta play the game!” — TREVOR NOAH

“Also, how embarrassing is this for Trump? Even his supporters knew they could call him any time and he won’t be busy.” — TREVOR NOAH

“Overall, these videos make it pretty obvious that Trump incited the rioters. They were wearing Trump hats, carrying Trump flags, and they all just watched Trump speak, and they were chanting, ‘Fight for Trump!’ Even that dog from ‘Blue’s Clues’ is like, ‘I need a challenge here, guys. We all know what this is, right?’” — TREVOR NOAH

“I mean, if one guy stormed the Capitol because he thought you said it to him, maybe you just can blame him. But if an entire stadium of people misunderstood you in the exact same way, I don’t know, man, that [expletive] on you.” — TREVOR NOAH

Desus and Mero got personal with their “life coach” Whoopi Goldberg. 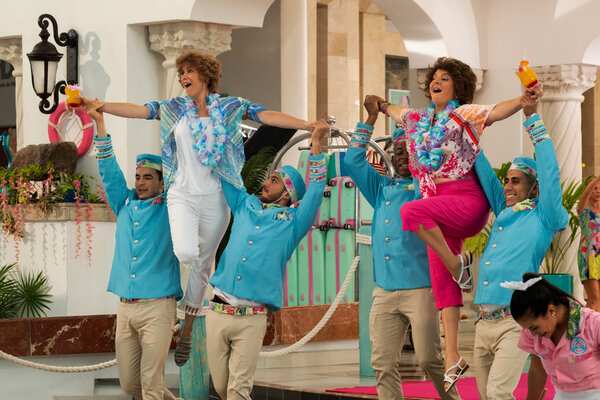 The “Bridesmaids” co-writers Kristen Wiig and Annie Mumolo share the screen in their new collaboration, “Barb and Star Go to Vista Del Mar.”