Welcome to Best of Late Night, a rundown of the previous night’s highlights that lets you sleep — and lets us get paid to watch comedy. Most of us are stuck at home at the moment, so here are the 50 best movies on Netflix right now.

Late-night hosts had a field day on Thursday with the fly that landed on Mike Pence and stayed on his head for more than two minutes during this week’s vice-presidential debate.

“You know vice-presidential debates are boring when a fly shows up and the entire internet loses its mind,” Jimmy Fallon said on Thursday night.

“At that point every American was like, ‘Is that on him or on my TV.?” — JIMMY FALLON

“And, hey, shouldn’t he be in quarantine? I heard something like 35 of his co-workers have the virus. Although, Pence is probably safe because he’s so boring his co-workers scatter whenever he comes in the room: ‘Run, guys, Pence is coming!’” — SETH MEYERS

”And, hey, after all the trouble you went through, nobody will remember a damn thing that was said thanks to a fly landing on Mike Pence. And it’s a shame, because before that happened, Pence was making some very terrible points.” — SETH MEYERS

“And look, flies land on people all the time. There’s nothing crazy about that. What was crazy is how long it sat there for. Even Trump was watching at home like, ‘Wow, two minutes with Mike Pence. I could never do that.’” — TREVOR NOAH

“OK, can I just say that I was not surprised at all to see that fly on Mike Pence. First of all, even a fly knows better than to land on a Black woman’s hair.” — TREVOR NOAH

“This is what happens when you go 18 years without blinking.” — JAMES CORDEN

“Mike Pence doesn’t even look live when he’s live. Dude is an in-person Zoom meeting. Whenever he started speaking, I started looking for the gallery view button.” — SETH MEYERS

“Meanwhile, a bunch of other flies off camera were like, ‘Oh, my God. I can’t believe you actually did it! You’re a legend, dude! Epic!’” — JIMMY FALLON

“And it was a weird situation from the start because there is a real chance that Pence could have Covid-19, even though he’s tested negative. And that fear wasn’t helped when Pence’s eye threw a gender-reveal party: ‘Pink! It’s a girl! Blood pink!’” — TREVOR NOAH

“He’s the head of the coronavirus task force. Not really a great look when you’re covered in bugs and bleeding out of your eye.” — JIMMY FALLON

“It’s hard to shake the reputation of being robotic when you show up looking like the Terminator.” — JIMMY FALLON

“Also, can you believe Kamala Harris had to stare at that for 90 minutes? As if she wasn’t under enough pressure she had to debate the Bond villain with the leaky eye.” — JIMMY FALLON

“Last night’s debate was an epic battle between side eye and red eye.” — JIMMY FALLON

“People are worried about Pence ’cause pink eye is a possible symptom of coronavirus. Even scarier, today Pence’s temperature shot all the way up to 84.6.” — JIMMY FALLON

“After the Commission on Presidential Debates announced this morning that next week’s debate will be virtual, President Trump said that he would not take part in the event. So as a proxy, they’re just going to throw up a badger who’s been separated from her babies.” — SETH MEYERS

“To be honest, Trump hating Zoom is maybe the most relatable thing he’s done since he became president.” — TREVOR NOAH

“It’s Trump’s fault we all have to do 15 Zoom meetings a day. He should be forced to go to at least one, shouldn’t he?” — JAMES CORDEN

“Yes, Trump’s time is very precious, he said while calling Fox Business in the middle of a deadly plague.” — STEPHEN COLBERT

On Thursday night’s “The Late Show,” Sean Ono Lennon performed his late father’s song “Isolation” in honor of what would have been John Lennon’s 80th birthday. 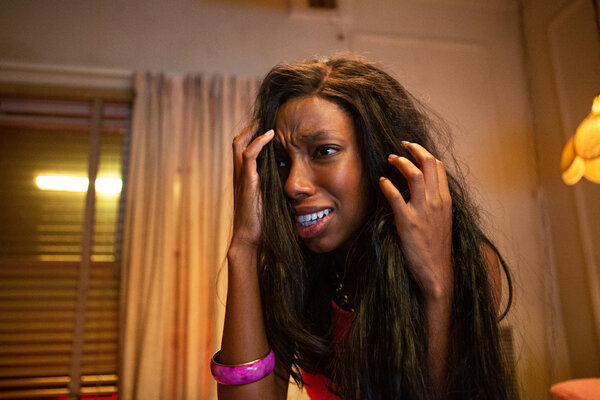 Trick-or-treating may be canceled this year, but these new horror movies offer ample opportunity to get into the Halloween spirit.