“Fait d’hiver” is a 1988 statue by Jeff Koons featuring a woman lying in snow being nuzzled by a pig.

“Fait d’hiver” is also a 1985 advertisement for the French clothing brand Naf Naf featuring a woman lying in snow being nuzzled by a pig.

There are multiple differences. Mr. Koons’s “Fait d’hiver” is a sculpture, not a black-and-white photograph, for a start. Mr. Koons’s woman also has sunglasses on her forehead, while his pig is wreathed in flowers. The sculpture also features two penguins.

But to Franck Davidovici, the creator of the ad, the resemblance was obvious the moment he saw a picture of Mr. Koons’s “Fait d’hiver” in autumn 2014, in the catalog for a blockbuster Koons retrospective held at the Pompidou Center in Paris.

He sued for copyright infringement in January 2015, and even tried to have the work seized. (He failed; the work had already been removed from the exhibition.)

Now, almost four years later, France’s legal system has agreed that he had a case.

On Thursday, a court in Paris ordered Mr. Koons, his company Jeff Koons L.L.C., the Pompidou Center and a book publisher to jointly pay Mr. Davidovici almost $170,000 for breach of copyright and damages caused. The amount is small compared to the value of Mr. Koons’s “Fait d’hiver,” which the Prada Foundation bought for over $4 million at auction in 2007.

The court dismissed the defendants’ arguments against the claim, which, according to the judgment, included that Mr. Koons should have freedom of artistic expression, that the work should count as a parody and that Mr. Davidovici did not make a complaint for almost 30 years while the artwork was shown worldwide. 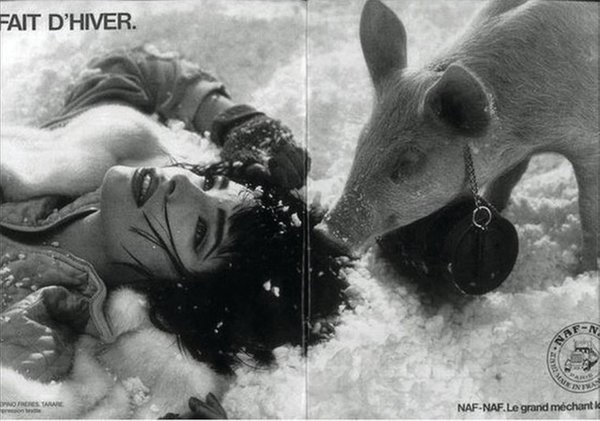 The statue has the same “very recognizable staging” as the ad, the judgment says, pointing out that even a lock of hair on the woman’s face is placed in the same position on the left cheek. They also have the same facial expressions.

This is not the first time Mr. Koons has found himself in trouble thanks to works that originally appeared in his landmark 1988 exhibition “Banality,” based on images from advertising and magazines. Shortly after the original show, at the Sonnabend Gallery in New York, he was sued by the photographer Art Rogers, whose image of a couple holding eight German shepherd puppies formed the basis of the sculpture “String of Puppies.” The case was settled for an undisclosed amount.

He also settled two subsequent lawsuits stemming from the show, one with United Feature Syndicate over his use of the character Odie from the “Garfield” comic strip. Last year, a Paris court decided that Mr. Koons had infringed the copyright of another French photographer to make a porcelain sculpture of two naked children holding some flowers.

Photographs of that sculpture, called “Naked,” were also used in the 2014 exhibition at the Pompidou Center; the actual statue did not appear because it was damaged on the way there.

The Gagosian Gallery, which represents Mr. Koons, did not respond to a request for comment. A spokesman for the Pompidou Center said it had no comment as it had only just started reading the judgment.

Mr. Koons has been on the other side of copyright cases, too. In 2010, his lawyers sent cease and desist letters to two businesses making and selling $30 bookends that resembled his famous “Balloon Dog” sculptures — prompting much internet mockery about whether Mr. Koons was claiming the rights to all balloon dogs.

Thursday’s ruling is nowhere near the biggest stir Mr. Koons has caused in Paris recently. For two years, he has been trying to find a home for his sculpture “Bouquet of Tulips,” a monumental gift to the city meant to be a tribute to the victims of the 2015 and 2016 terror attacks.

He has faced complaints that the sculpture, 34 feet high and 27 feet wide, is more product placement than tribute, and seen opposition to potential locations. But in October, he appeared to find a solution. It will be installed next year in the gardens of the Petit Palais, the home of an art museum near the Champs-Élysées.