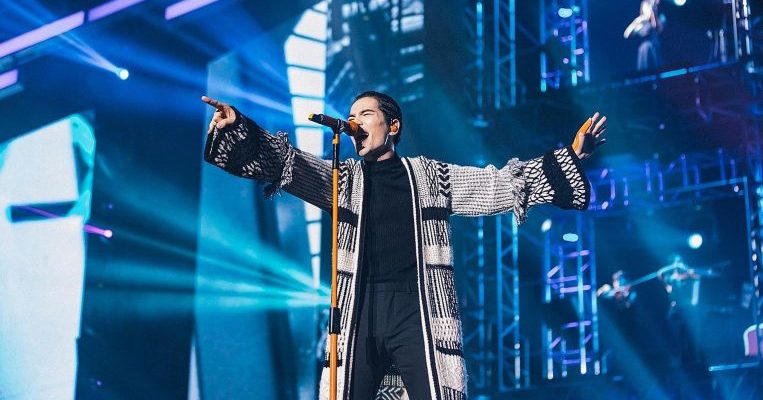 Going into a Jam Hsiao concert, I was prepared for killer vocals.

The Taiwanese Golden Melody Award-winning singer has always been known for his pipes, ever since his debut on reality singing competition One Million Star more than 10 years ago.

His singing last Saturday night was not without small flaws here and there, but it was powerful throughout. He reeled off six songs before he stopped for a brief chat with the audience.

At one point, near the end of a 21/2-hour concert where he tore through power ballads and hit show-stopping high notes, he put down the microphone, took off his earpiece and sang his 2014 number The Song.

There was an audible gasp of surprise and the crowd of 9,000 kept quiet to hear him sing, wonderfully and clearly, without a microphone, at the Singapore Indoor Stadium.

A singer with this kind of chops can do a simple, pared-down show, but Hsiao, true to the concert’s name, wants to be Mr Entertainer.

He is a dramatic performer who often loses himself in the songs.

During the show, he would throw his head back, stamp his feet and sprint across the stage whenever the music pumped him up. Sometimes, he would open his arms wide and just listen to the band play.

That sort of energy was almost disconcerting, as if he were in a trance, but it elevated his performance to the level of theatre.

It helped that the stage was beautiful. The backdrop was a screen that opened up to reveal a three-by-three set-up, with classical musicians playing live in some of the nine boxes.

Hsiao, 31, showed off his range by playing the piano and the drums, which had opened up the world of music to him in his younger days.

I would have enjoyed the concert more if he had sung more of the many covers he is known for, but he chose to focus on his original songs like Princess, Pi Nang and Miss You Forever.

He left large portions of the lone cover, New Endless Love, for the audience to sing, after helping them to get the right pitch. He then sang the harmony, which still made for a nice moment.

It was probably my favourite part of the concert as it had a lot of heart. His love for music, his enthusiastic fans and his spot-on musicians all came through strongly.

He was also great at interacting with his fans. He bantered with the audience when some of them asked him to throw his towel into the crowd, and during the encore, he climbed up the railings to get close to fans, taking selfies and shaking hands.

To me, the Mandopop singer is one of the best performers of his generation.