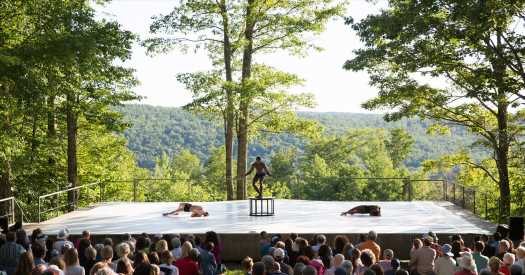 Even by the standards of 2020, Jacob’s Pillow had a tough year. Not only did the dance center in Becket, Mass., have to cancel its annual summer season for the first time in its history, but it also lost one of its theaters, the Doris Duke, to a fire.

But 2021 has begun more brightly: the Pillow, as it is called, announced on Thursday it will hold an outdoor festival this year, June 30 to Aug. 29, and that it will soon begin renovations on its main performance space, the Ted Shawn Theater.

Pamela Tatge, the director of Jacob’s Pillow, said the festival’s summer slate would be “a combination of commissioned works and existing works by companies that people know well and have histories with the Pillow, in addition to a significant number of Jacob’s Pillow debuts.” The lineup will be announced in April.

Many groups that will be featured, she added, are from New York or nearby. “We are leaning into companies that are within driving distance of Jacob’s Pillow this summer.”

Performances will take place at the center’s outdoor amphitheater, whose seating will be rearranged and expanded to safely accommodate as many audience members as possible under state regulations, and throughout its 220-acre campus. “It’s been so exciting to work with artists to think about what of their work would be appropriate and exciting to present outdoors,” Tatge said.

Online audiences will have the opportunity to tune in as well. Videos of some of the performances will be available to stream through Sept. 10.

The renovation of the Ted Shawn Theater is the final phase of a five-year plan whose completion is scheduled to coincide with the Pillow’s 90th anniversary in 2022. The new design will increase stage and dressing room space; it will also add a ventilation and air-conditioning system, without which, Tatge said, the Ted Shawn “simply would not be a viable theater in the post-Covid world.”

Of the $22 million that the Pillow says it needs to fulfill the plan’s goals, $20 million has been raised since 2017. On Thursday, it started Dance We Must, a new campaign, to get itself over the financial finish line.

Plans to replace the Doris Duke Theater will be announced in fall.