“Magpie Murders,” a new series on “Masterpiece,” is a mystery within a mystery, based on a book by Anthony Horowitz. 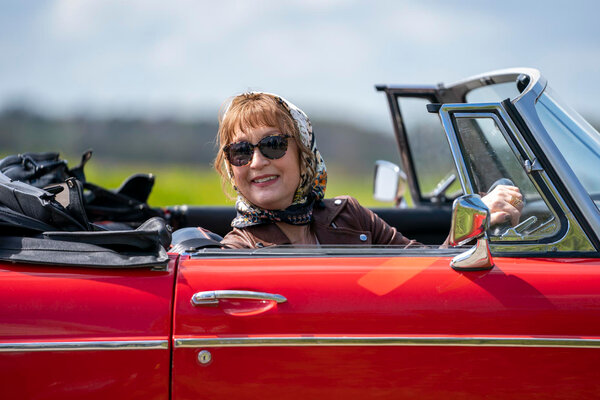 LONDON — It’s 1955. The great detective Atticus Pünd is heading to the picturesque fictional Suffolk village of Saxby-on-Avon to investigate a murder. A bright red MG sports car zips by, and Pünd nods to himself with a slight smile. The car is driven by Susan Ryeland, who inhabits an entirely different world — the present. And she is returning from Saxby, where she was searching for the missing final chapter of the book in which Pünd solves the crime.

Confused? It’s one of the many meta moments in “Magpie Murders,” a Russian doll murder mystery that sets a 1950s fictional detective story inside a contemporary inquiry into the death of the author who wrote it. The six-part series, which debuts in the United States on PBS’s “Masterpiece” on Sunday, is based on the novel of the same name by Anthony Horowitz, who also adapted it for television.

“The plot is so detailed and cleverly constructed that only Anthony could have picked it apart and put it back together,” said Lesley Manville, who is set to appear as Princess Margaret in a new season of “The Crown” and is the heroine of the new film “Mrs. Harris Goes to Paris.” In “Magpie Murders,” Manville stars as Susan, an intelligent and witty editor at Clover Books, a small publishing house with one star author: the unlikable Alan Conway (Conleth Hill), whose Atticus Pünd series has made him famous and rich.

Conway delivers the latest Pünd novel, which Susan begins to read, taking us into his fictional 1950s world, complete with an Agatha Christie-esque scenario: murdered lord of the manor and a large number of suspects. “There is nowhere more dangerous than an English village,” Conway writes gleefully at the beginning of Episode Two.

“It’s the notion of the fictional detective investigating crimes in sedate 1950s rural England, with roses and chintz and seething hatred underneath!” said Tim McMullan, who plays Pünd — a German refugee of Greek-Jewish origins, who has survived concentration camps.

But then Susan discovers that the last chapter of Conway’s book is missing. “Is there anything more useless than a whodunit without the ending?” she exclaims in a fury. And the author is found dead. Did he jump from the tower of his manor house, or — as Andreas (Alexandros Logothetis), Susan’s boyfriend, asks, tongue firmly in cheek — was he pushed?