Isabelle Huppert has five films coming out in 2019. The French actress is so notoriously busy that, when playing an exaggerated version of herself in an episode of the Netflix comedy “Call My Agent!” last year, she was depicted shooting two major films at once (and doctoring the script for one of them) while squeezing in an artsy Korean flick on the side and preparing to play Hamlet onstage.

The portrayal is gently satirical. But only just.

“I love what I do,” Ms. Huppert said in an interview, when asked why she keeps such a busy schedule. “It’s a great privilege in life, to love what you do.”

The actress, whose American profile got a big boost from earning an Oscar nomination for her 2016 no-holds-barred performance in “Elle,” is taking a brief break from film to star in “The Mother,” a play by Florian Zeller that begins performances Feb. 20 at the Atlantic Theater Company. (During the run, she will also have another movie release: Neil Jordan’s demented psycho-thriller “Greta,” in theaters March 1.)

The American theater producer Jeffrey Richards approached her with the project by Mr. Zeller — whose “The Father” was on Broadway in 2016 — and she immediately signed on.

“I thought the part was great,” Ms. Huppert said after a rehearsal. “It’s based on a theme that’s simultaneously specific and universal, that of a depressive woman who has a hard time dealing with her husband’s and her children’s absence. Sometimes she reminds me of Blanche in ‘A Streetcar Named Desire’ because she lives between reality and fantasy and dream.”

Anne, the titular mother, is opaque and elusive. Is she mad? Is she hopped up on too many pills? The character, and the play, do not provide answers. But Ms. Huppert, who has an uncanny gift for portraying women on the edge, should make the mystery compelling. 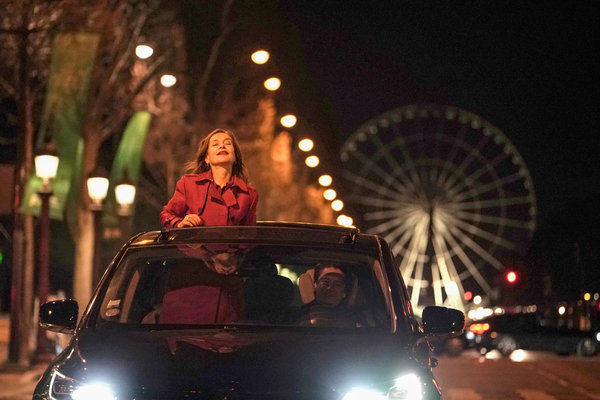 It’s hard to believe that, with more than 120 films on her résumé, she has had much free time, but since the early 1970s Ms. Huppert, now 65, has also had a thriving stage career. She has appeared in classics by Shakespeare and Ibsen, as well as in drastically experimental, reworked classics like “A Streetcar,” Krzysztof Warlikowski’s spin on Tennessee Williams. She has done contemporary hits — she was in the original Parisian cast of Yasmina Reza’s Tony Award-winning “God of Carnage” — and contemporary tests of endurance, like Sarah Kane’s “4:48 Psychosis,” a grueling play in which Ms. Huppert remained nearly motionless for 105 minutes.

She clearly enjoys a challenge. Of working with the exacting director Robert Wilson on shows like “Orlando” and “Quartett,” for instance, she noted that “the more constraining it is, the more you find your space and your freedom. I require constraint — I don’t suffer from it at all. I welcome it with great pleasure.”

“The Mother,” which is directed by Trip Cullman and also stars Chris Noth as her husband, is only the third time Ms. Huppert has done theater in English, after Schiller’s “Mary Stuart” in London in 1996 and a kinetic, hysterically pitched staging of “The Maids” opposite Cate Blanchett at the Lincoln Center Festival in 2014.

The irony is that, like “The Maids,” “The Mother” was originally written in French. Ms. Huppert has not read the original, nor did she see the premiere in Paris 2012. She jumped straight into Christopher Hampton’s English translation.

“There is a phrasing, a rhythm to this language that you must respect,” she said of the play. “I try to remain vigilant about that, and that my partners do as well. There are pauses, there are beats — it’s like music, and it’s very important to respect that in a very precise manner.”

At the same time, Ms. Huppert knows a certain looseness is key when working on a project.

“The very first time we met,” Mr. Cullman, the director, recalled, “I asked her many questions about her process, how she’d like to explore her character. She simply said, ‘I’m free.’”

“I make a suggestion or she has an idea, and we try it,” he added. “And it’s an all-in experience: ‘O.K., I’m going to dump a bottle of pills on the floor and I’m going to crawl around and just consume 30 pills in 30 seconds and then I’m going to writhe like a cat.’ It feels like there’s an immediate ability on her part to just liberate herself from the constraints of a psychological and naturalistic portrait, to just evoke dream logic in her performance.”

In her downtime, away from film and theater, Ms. Huppert likes to … end up in theaters. She said she loved Sam Gold’s divisive Broadway revival of “The Glass Menagerie” with Sally Field in 2017, and since arriving in New York for “The Mother” she has seen “Blue Ridge” (“Marin Ireland is great, really extraordinary”); “Choir Boy” (“It’s not quite a musical, it’s an adventurous, modern way to renew the genre”); and “True West” (“Very good”). Next on her list was “Network,” by Ivo van Hove, who is slated to direct her in “The Glass Menagerie” at the Odéon Theater in Paris in 2020.

Ms. Huppert was even game for “Rent: Live” at a watch party with her fellow cast members and friends of Mr. Cullman’s.

Then it was back to the rehearsal room to try to make sense of Anne in “The Mother.” Or not: Ms. Huppert has little patience for putting her characters on the analyst’s couch.

“The amazing thing about Isabelle,” Mr. Wilson said in an email, “is that she can think abstractly. This is very rare in the theater today, where actors are thinking psychologically, naturalistically.”

She and Mr. Wilson will reunite after “The Mother” concludes for “Mary Said What She Said,” a new monologue by Darryl Pinckney that will open in May in Paris. The show will tour Europe, “then it’s ‘The Glass Menagerie’ with Ivo van Hove,” Ms. Huppert said.

“Wait, when am I doing ‘The Glass Menagerie’?” she said after a pause. “I’m not quite sure. I need to save some time to make films. I don’t know.”

She laughed. “I’m having a little ‘Call My Agent!’ moment.”