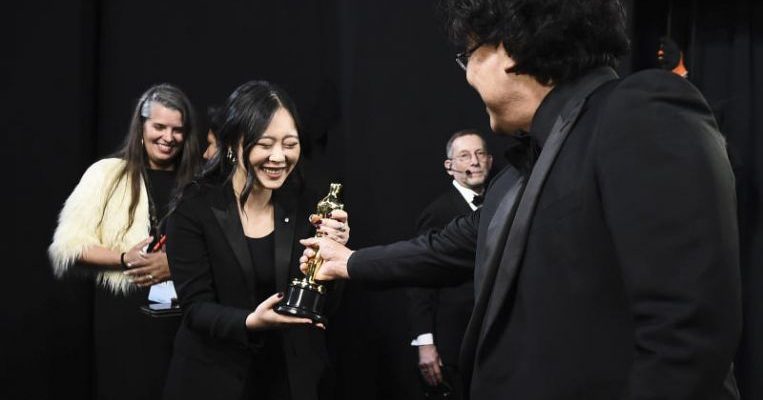 LOS ANGELES (NYTIMES) – Bong Joon-ho was on stage a lot on Sunday night (Feb 9), giving one acceptance speech after another as his film Parasite scooped up Oscars, including Best Picture. Beside him each time was a familiar face.

Sharon Choi, a filmmaker herself, is the interpreter who has followed Bong and the Parasite team throughout their successful awards season.

She has given the English translation of the director’s (many) speeches and interviews, through several red carpets and late-night TV appearances. Bong speaks English and will occasionally shift into the language for brief remarks – “I’m ready to drink tonight,” he said toward the end of one of Sunday’s speeches – but he generally seems to prefer leaving it to Choi.

At the Oscars, Choi joined Bong onstage four times: as he accepted the awards for Best Director, Original Screenplay and International Feature, and to interpret for Kwak Sin-ae, a producer, in her speech for the film’s Best Picture win.

Choi has been at Bong’s side since May last year – when Parasite won the Palme d’Or, the top prize at the Cannes Film Festival in France – according to The Korea Herald, an English-language newspaper in South Korea.

For someone who has appeared on several awards stages and live television broadcasts, though, Choi does not seem to cherish being in the spotlight – “This is so embarrassing,” she said in an interview with The Hollywood Reporter at the Golden Globes last month when the questions pivoted to her.

But Choi has ended up there anyway, thanks to the visibility that comes with critical success and awards domination: Parasite, after winning at Cannes, also nabbed Best Foreign Film at the Golden Globes, the Writers Guild Award for Original Screenplay and Best Ensemble at the Screen Actors Guild Awards.

Bong has another explanation: “She’s perfect, and we all depend on her,” he said in English in The Hollywood Reporter interview. “And she’s also a great filmmaker,” he added.

When she is interpreting – usually on camera, or to crowds of Hollywood royalty, or both – Choi’s voice never seems to waver. Apparently, she hides her nerves well: “I’m always super anxious,” she said in The Hollywood Reporter interview last month.

Choi’s calm presence under the onstage pressure has caught the attention of online admirers, too.

“I know she has a huge fandom,” Bong said in English on Sunday in a red carpet interview with E!. He continued in Korean.

“It’s very embarrassing to translate,” Choi said, “but he said that thanks to me, this campaign has been a smooth journey.”