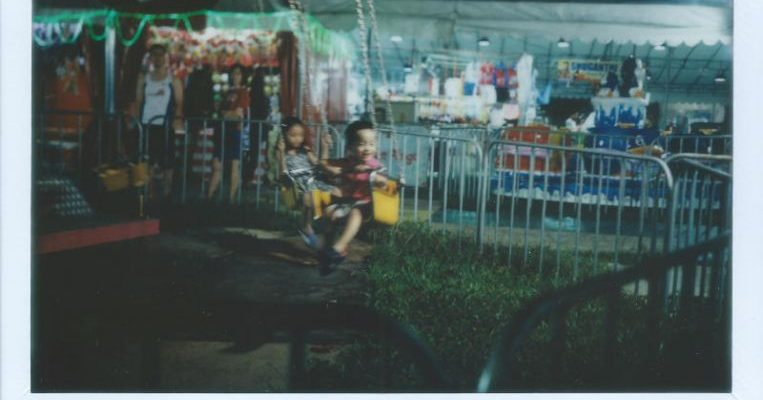 SINGAPORE – People of a certain vintage will recall the magic of using a Polaroid camera for the first time: snapping a photo and watching it develop within seconds.

“It was special,” recalls retiree Betty Tang, 67, who took Polaroid photos of her children in the 1980s and has held on to a couple of these discoloured photos.

“I would use the camera only once in a blue moon – the film was quite expensive.”

In pop culture, Polaroid’s influence is still very much present: The old Instagram logo was inspired by a Polaroid camera and the word “Polaroid” today is synonymous with “instant photography” – even though other brands such as Fujifilm, Leica and Lomography also produce instant cameras.

While Madam Tang has since abandoned the old-school medium, a number of people in Singapore are embracing it – using it in their art, to document everyday life and collecting old instant cameras as a hobby.

The National Museum of Singapore is hosting an exhibition which looks at the history of Polaroid photography and its impact.

Multidisciplinary and Singapore-based artist Noreen Loh, 37, is part of a long tradition of artists – think Americans Andy Warhol and Ansel Adams – who have used instant photography in art.

Her installation Beneath The Surface consists of dozens of Polaroid photos slotted into old battery cartridges of Polaroid cameras, which act as frames for the photos.

Tiny LEDs behind the photos, which are powered by the original batteries themselves, can light up parts of the photo – car headlights or throbbing hearts – when the viewer pushes a button.

The installation was exhibited in Singapore in 2016.

Loh, who goes by the name “Miun”, is married to Mr Jimmy Phua, 38, a co-founder of camera store 8storeytree.

On her interest in incorporating Polaroids into her art, she says: “Polaroids are tangible – you can hold them in your hand… The film has lots of layers and every layer I remove is new to me. It’s like magic.”

There are others who enjoy experimenting with artistic techniques when using instant cameras.

Law graduate Damian Wong, 26, and lawyer Sandra Ong, 27, have a website called Damian With Sandra, where they showcase instant photos they have taken themselves and post reviews of instant cameras.

One of their experimental photos features a male figure superimposed onto a view of the cityscape, created using double exposures.

Another photographer, Darren Soh, 42, has tried using expired film for his shots.

During the 2011 General Election in Singapore, he took photos of a People’s Action Party lunchtime rally using his very last pack of Polaroid 669 film. The film, which had expired more than five years ago, resulted in photos with a greenish tint, which made the photos seem older than they were.

Like other fashion photographers working in the years leading up to the mid-2000s, he would modify his professional camera by attaching a Polaroid back to it.

This allowed him to use a Hasselblad medium-format camera to take instant photos – test shots that would tell him if the lighting was right.

Wong, who has photographed more than 10 celebrities for the cover of Time magazine, sometimes lets his subjects keep the test shots as souvenirs.

“Once I gave them the Polaroid, they were in such a good mood and they started shooting well.

“Some photographers don’t like to do it because it lets the cat out of the bag. But it’s hard to say no to Jackie Chan.”

While instant photography is popular, many fans say they do not expect a big revival of the medium.

Mr Soh says: “Every image you make costs around a dollar and it can add up very quickly.”

A pack of Polaroid Originals i-Type Color Film costs $30 for eight sheets, while Fujifilm instax mini film costs $13.90 for a pack of 10 sheets.

“Instagram is literally free. For a revival to really work, the cost of film has to come down,” says Mr Soh.

But instant photography might not be on its last legs yet.

American company Polaroid Corporation may have produced the first instant camera in 1948, but other companies have since arrived on the scene.

Fujifilm launched a line of instant cameras in the 1980s and Kodak made its foray into the market in 1976, although Polaroid later sued it – successfully – for infringing its patents.

Polaroid cameras are now being produced by a Dutch company called Polaroid Originals.

Fujifilm plans to sell 10 million units in the 2018 financial year and increase the sales of instax cameras in South-east Asia during the same period to nearly twice the volume achieved about two years back.

He is unable to disclose regional figures.

The company did not release detailed figures.

Companies such as Polaroid Originals and Fujifilm have also tried to make their products relevant to a new generation by coming up with new cameras or instant printers that can communicate with smartphones.

But many users already straddle both old and new mediums – such as national serviceman Solomon Soh, 22, who uses his Fujifilm instax Wide camera to take photos of strangers such as elderly cardboard collectors and migrant workers.

He gives them the instant prints of themselves as gifts and takes a final digital photo of his subject posing with the instant photo. Later, he posts the digital shots on Instagram.

One of the things that makes instant photography special for Mr Soh is the fact that the image is not quite instant. Because it takes several seconds to develop, this becomes the perfect excuse for him to start a conversation with the person he has just photographed.

“In those special few seconds, I have established a doorway to a potential friendship,” he adds.

“This is the power of an instant camera.”

HE HAS MORE THAN 70 INSTANT CAMERAS

Instant camera hobbyist Brandon Ong, 32, is the proud owner of a collection spanning the history of Polaroids – from Polaroid’s Model 95, the first instant camera to be sold commercially in 1948, to the OneStep Plus camera by Polaroid Originals which came out this year.

Since 2013, Mr Ong has amassed about 70 instant cameras, which he buys from local and overseas collectors, online retailers and flea markets such as the old Sungei Road Thieves’ Market.

Most of them are Polaroid, Fujifilm and Lomography cameras. They are displayed in his bedroom and also kept in storage. “They are a piece of history and are still working too… that amazes me,” he says.

His go-to camera is Polaroid’s Sun 660 because of its autofocus and flash functions and “vintage clamshell look”.

“It takes a lot of shooting to really know one camera,” he adds. “Every camera is different… even shooting the same photo, with the same film – it doesn’t come out the same.”

Although he sells about five cameras a month – each priced around $100 – on platforms such as online marketplace Carousell, at flea markets and the Culture Cartel street culture festival, some of the rarer editions are not for sale.

One of them is the Big Shot by Polaroid, which was released in 1971 and famously favoured by American artist Andy Warhol.

Then there are collectors’ items such as the pink Hello Kitty Polaroid 600 Land camera and the gold Polaroid 50 Sun 660, which was released to mark Polaroid’s 50th anniversary.

The cost of film sets him back by about $35 for a pack of eight.

Mr Ong, who stores boxes of unused film in a refrigerator in the Sengkang condominium he shares with his parents, admits that this hobby is “not cheap”.

What makes it worthwhile, he adds, is the “personal touch” of instant photos and his role in helping to raise awareness of the medium in Singapore.

His first brush with instant photography came during a trip to a zoo in Thailand 20 years ago, when he and his family had a Polaroid photo taken as a souvenir.

He then started collecting instant cameras in his 20s.

Besides selling cameras, he also repairs them. He can reskin the leather of some old cameras and clean their lenses. One challenge, he adds, is that replacement parts might not be available in Singapore.

Mr Ong, a former event and account manager who is unemployed at the moment, is now pursuing his passion full-time: “For me it’s really about people – and sharing my passion with them”.