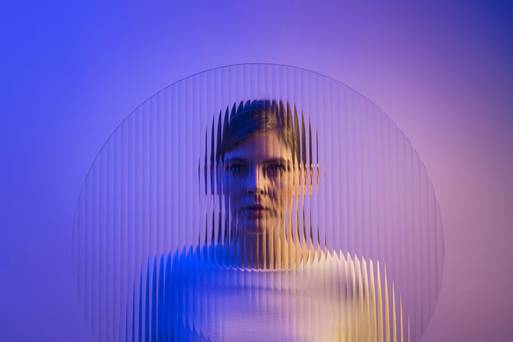 The show opens with Matthews marking out a perfect circle with white chalk on a black floor, using string as a guide. This geometric shape will later function as a black hole in space. This action is accompanied by a subtle, recorded interview. An adult asks: “are you afraid of the dark?”, and a child answers, “yes and no”. Matthews then makes a simple address to the audience, asking what do we mean by infinity.

Nessa establishes her lifelong interest in space travel, explaining that her name always brought to mind Nasa, the United States’ aeronautics programme. She strikes a tone of realistic, confessional theatre, in a verbatim mode. But this realism soon falls away, as she takes us on a journey to the edge of the universe. By analogy, she is bringing us to the outer reaches of a person’s experience of isolation.

Matthews’ likeable persona is very winning; she inspires trust and immediate empathy. The concept is excellent, and when she becomes contained by the space capsule, which feels safe like a womb, but is at the same time hurtling through the universe, you genuinely feel for her and her isolation. She has been on this journey for four years.

Highly impressive costume and set design by Naomi Faughnan is out of this world; the capsule is an impressive polyhedron structure and the space suit is a stunning theatrical creation. Lighting by Bill Woodland enhances these visuals enormously; a variety of strobes animate the space capsule and there is deft use of torches. Dylan Tonge Jones’ sound design, with clever use of voiceover, adds a vital, unsettling dimension. Eoghan Carrick directs with plenty of tech style, but keeps the show’s heart to the fore.

Though there is plenty to admire here in the design department, and the performance is finely judged, ultimately the abstract nature of the writing fails to deliver fully on its promise.

The space odyssey doesn’t sufficiently hook back into the realism, and the experience is less engaging and communicative than it might be; it lacks a dramatic dynamic or story build-up. So while it beautifully describes the mental state of isolation, it doesn’t fully convert it into drama.

Two men in their thirties meet in a tidy Dublin sitting room in this revival of a fine one-act play by Deirdre Kinahan. Neat furniture and prints of paintings from the National Gallery set the ­studied, respectable tone.

Angry, damaged Damien is there for his estranged father’s funeral. Gentle, appeasing Kevin is his childhood friend and cousin. The two men are meeting for the first time in over a decade. Troubled Damien has been a drug addict and is now on a methadone programme. Cosseted Kevin has become a choreographer.

It is Kevin’s task to manage his volatile and explosive friend. The pair are uneasy, but tensions begin to dissolve once they engage with Kevin’s recent modern-dance show about grief. This is an original and illuminating idea, and Kinahan’s script speaks volumes about the complex human response to death.

Stephen Jones is almost unrecognisable at first as the bitter Damien. Ste Murray is soft and sincere as Kevin. Will O’Connell, who starred in the original production in 2007, directs with sensitivity for Awake & Sing productions. He steers a steady course through the delicate energies of anger and grief, subtly pumping up the humour.

Unfolding in real time over 40 minutes, this is a charming lunchtime encounter.