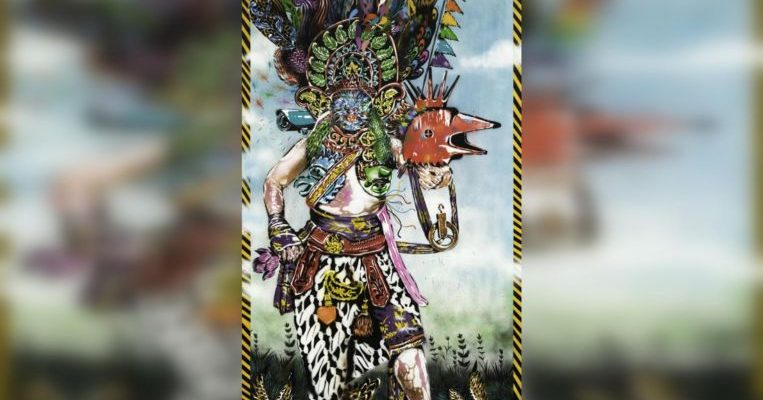 SINGAPORE – Indonesian artist Anagard, 35, has won the UOB Southeast Asian Painting of the Year award for a work of art exploring the idea of harmony amid diversity.

Welcome Perdamaian, Goodbye Kedengkian (Welcome Peace, Goodbye Hostility), a stencil spray paint on aluminum work, was chosen from among the national winners of the UOB Painting of the Year competitions in Indonesia, Malaysia, Singapore and Thailand.

The judging panel said they were impressed by Anagard’s distinctive stencil spray paint on aluminum technique – often seen in spray-painted murals – which gave his painting a three-dimensional quality.

“I wanted to share the importance of harmony, unity and peace,” said Anagard, who received his cash prize from Minister for Culture, Community and Youth Grace Fu during a ceremony at Marina Bay Sands on Wednesday (Nov 6).

The artist adds: “I was inspired by a house of prayer known as Rhema Hill (Bukit Rhema) situated in Central Java, where people of different countries meet to explore their spiritual selves. The painting draws on the unique architecture of the prayer house with a roof shaped like a head of a dove, itself a symbol of peace.”

The United Overseas Bank’s (UOB) competition is now in its 38th year and is the longest-running art contest in Singapore, where it was first launched. Before the regional award was introduced in 2013, participants would compete only in their respective South-east Asian countries.

It has advanced the careers of well-known Singapore artists such as Cultural Medallion recipients Goh Beng Kwan, Chua Ek Kay and Anthony Poon.

This year’s Singapore winners are Wong Tze Chau, 41, who clinched the UOB Painting of the Year (Singapore) award for his acrylic on cotton canvas diptych War And Peace; and Casey Tan Jie Wei, 25, who won the Most Promising Artist of the Year award for his acrylic on canvas painting The Water Is Wide, which was inspired by the global refugee crisis.

UOB chief executive and deputy chairman Wee Ee Cheong said the award aims to “nurture future generations of great artists from across South-east Asia”, adding that the bank plans to eventually run the contest in all Asean countries where it has a presence.

The winning paintings from this year’s competition will be exhibited at the UOB Art Gallery, UOB Plaza 1 at 80 Raffles Place from Nov 9 to Feb 20.