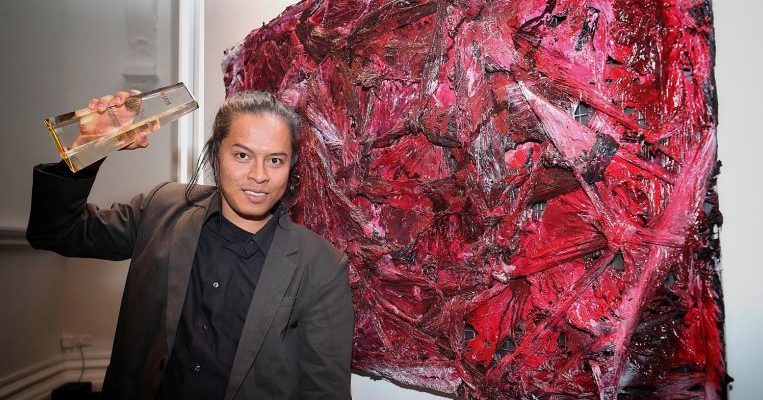 The artwork also examines the importance of embracing racial and cultural differences, through the use of various materials, including plastic enamel and resin.

Drawing on the inter-ethnic tensions in Sampit, in Central Kalimantan, in February 2001, Wahyudianto said: “I wanted to share the importance of empathy as beneath our skin; we are all made of the same flesh.”

The judging panel said it was impressed by his ability to evoke this sense of empathy towards communities involved in social conflicts.

Guest of honour Baey Yam Keng, Senior Parliamentary Secretary to the Ministry of Culture, Community and Youth, and Ministry of Transport, gave out the award at Victoria Theatre yesterday.

The UOB competition is in its 37th year, and is the longest-running art contest here.

The UOB competition is in its 37th year, and is the longest-running art contest here. It has launched the careers of well-known artists, including Singapore Cultural Medallion recipients Chua Ek Kay and Anthony Poon.

It has launched the careers of well-known artists, including Singapore Cultural Medallion recipients Chua Ek Kay and Anthony Poon.

Before the regional award was introduced in 2013, participants in the UOB Painting of the Year competition would compete only in their respective South-east Asian countries – Thailand, Malaysia, Indonesia and Singapore.

This year’s Singapore winners include Khairulddin Abdul Wahab, 28, who clinched the UOB Painting of the Year (Singapore) award for his work, Rite Of Passage, which depicts a scene from an oil bath ritual; and Hu Jingxuan, 29, who won the Most Promising Artist of the Year (Singapore) award for her mixed media work, Encapsulated Time, where she explores the ideas of cultural borders and evolving social contexts.

The winning paintings from the competition will be exhibited at the UOB Art Gallery, UOB Plaza 1, at 80 Raffles Place, from Nov 9 to Feb 28 next year.