LONDON — Perceptions of the art market can often be shaped by the huge prices paid for work by the West’s most famous painters and sculptors. But there is another culture that can also inspire spectacular sales.

Last month, at Sotheby’s in Hong Kong, a Chinese 18th-century Imperial porcelain “poppy” bowl sold for $21.6 million. At the same auction, an elaborately decorated “fish” vase, also thought to be of Imperial provenance from the Qianlong era, raised $19 million.

Buoyed by a surging economy, Chinese dealers and collectors have since the mid 2000s been bidding formidable sums for the finest artworks from their country’s past. But in recent years, as China’s economic growth has slowed, the market for its antiques has become less frothy.

Just under half the 299 lots offered in Sotheby’s fall series of Chinese works of art sales in Hong Kong managed to find buyers. The Qianlong “fish” vase was marketed by the auction house as the rediscovered pair of another that was bid to an extraordinary 51.6 million pounds, then about $83 million, at a small auction house in London in 2010. The Beijing-based bidder never paid for that vase, and it was sold privately in 2013 to another buyer for $32 million to $40 million. The $19 million bid in Hong Kong for its supposed partner fell well short of that.

“People are very picky,” said Kate Hunt, a senior specialist in Chinese art at Christie’s in London, which held an auction on Tuesday as part of “Asian Art in London,” an annual series of exhibitions, auctions and lectures. 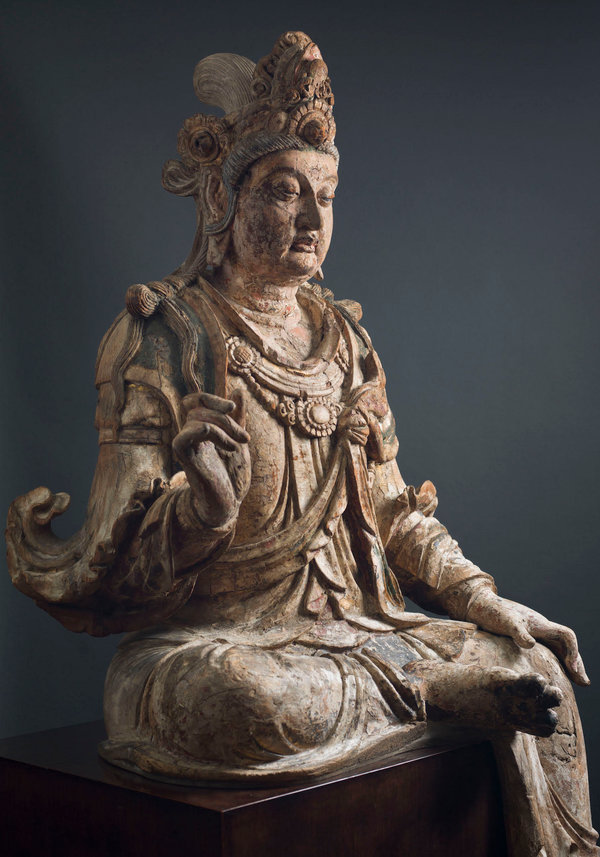 Reflecting the selectivity seen in Hong Kong, the sale at Christie’s raised £8.7 million, selling just over half of the 320 lots.

“Prices stopped bubbling in 2015,” said Ms. Hunt, referring to the year that China’s stock market plunged. She added that Beijing’s recent tightening of money outflows had made it difficult for Chinese buyers to pay for top lots at auctions in Europe and America. “But the market has matured,” Ms. Hunt said. “And the Chinese love old English provenances.”

With their own market awash with forgeries, the Chinese look to Europe for pieces with ownership histories that guarantee authenticity.

Christie’s live sale in London included 24 pieces from the collection of Soame Jenyns, a renowned scholar of Oriental art, who worked as a curator at the British Museum from 1931 to 1968. This was an alluring provenance for the Chinese dealers who crowd these London sales, and there were plenty to be found in town this week, shining flashlights into bowls and vases, and taking photographs with their cellphones.

The star of the collection was undoubtedly a 15th-century gilded bronze seated Buddhist figure, estimated at £150,000 to £200,000. Remarkable for the quality of its casting and for the rare survival of its original sealed base, the piece topped the sale with a price of £1.9 million to an Asian bidder, according to Christie’s.

Roger Keverne, a dealer exhibiting at “Asian Art in London,” was in the salesroom. “Two of my Chinese clients asked about the piece. They’ve been revving up on Buddhism for a while,” Mr. Keverne said. “The Cultural Revolution tried to wipe it all out. Now they want to appreciate that culture. It’s a repatriation thing.”

Chinese buyers have recently found an appreciation of the rarefied field of Buddhist sculpture, an example of which reached an auction high of $30 million in 2014. The enthusiasm might be viewed as a sign of what Ms. Hunt, the Christie’s specialist, identified as maturity in the market.

Giuseppe Eskenazi, founder of Eskenazi, one of the 43 dealerships participating in “Asian Art in London,” said he had been buying Chinese Buddhist sculpture since 1972.

“I was selling it mostly to English and American collectors, and to museums,” Mr. Eskenazi said. “There was a lack of appreciation in China. It just didn’t register. But now younger Chinese collectors bow in front of it.”

Eskenazi has recently sold an imposing Song dynasty wooden Buddhist sculpture to the Louvre Abu Dhabi. The piece was priced in a 2014 exhibition in the gallery at $25 million. This week, the gallery was offering works made during China’s fractious “Six Dynasties” period from the third to the sixth centuries, collected over four decades by the Hollywood talent agent Norman Kurland.

With its emphasis on terra cotta tomb figures — which Chinese people traditionally regard as inauspicious to own — and serene stone Buddhist sculpture, the Kurland collection could be viewed as reflecting a scholarly Westerner’s taste, but there were plenty of Chinese admirers at the Monday night viewing. By Wednesday, the gallery said that several of the 38 pieces had sold to Chinese collectors, including three Buddhist objects. Among those was a sixth-century limestone bust of the Buddha, priced at more than $1 million.

Other London dealers held thematic exhibitions. Priestley & Ferraro mounted a show of 20 Chinese artworks featuring elephants. The animals are a protected species in Yunnan Province and have long been revered in Chinese culture for their perceived steadfastness.

Among the show’s less expensive items, a difficult-to-date but charming inkstone carved with an elephant quickly sold at £15,000.

“The usual dealers are here, but there isn’t as much for them to buy,” said David Priestley, co-founder of Priestley & Ferraro. Mr. Priestley added that the supply of high-quality Chinese artworks was being progressively depleted by the “vacuum cleaner that is China sucking the goods out of Europe.”

With the United States no longer threatening to impose a 25 percent import tariff on Chinese antiques — a move that could have benefited Europe’s art trade — London is faced with ever-diminishing supplies of quality pieces.

Repatriated Chinese antiques generally don’t come back. Those pieces that do arrive in Britain from China are often not what they seem, according to John Axford, an Asian art specialist at Woolley & Wallis, a British auction house.

“You’ve got to be ever so careful. There are lots of duds out there with ‘old’ labels and receipts,” said Mr. Axford, brandishing a Song dynasty Qingbai porcelain bowl, estimated at £2,000-£3,000, at the London viewing for a coming sale at his auction house. From a Spanish collection, the bowl had a label and receipt from the New York dealer James Lally. Among the many calls and emails he made to verify the authenticity of the objects, Mr. Axford phoned Mr. Lally, who confirmed that the Qingbai bowl was an “old friend” from his stock.