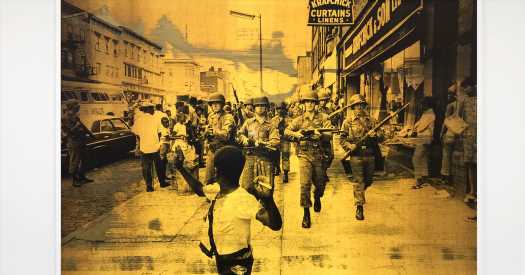 In the soaring atrium at the entrance to Hank Willis Thomas’s exhibition “All Things Being Equal…” at the Portland Art Museum, a circle of 28-foot-long blue banners stitched with rows of white stars descends to the ground. Titled “14,719,” this immersive chapel of falling stars echoes elements of the American flag and commemorates the number of individuals shot and killed in the United States in 2018.

“The most likely way for young African-American men to die is by gun violence,” Mr. Thomas, a conceptual artist, said in his Brooklyn studio on the eve of his first major museum survey. The Portland, Ore., show, which opened this month, includes some 90 photographs, sculptures, installations, videos and collaborative public art projects that shine a light on painful American stories and the aspiration for social justice. “But all you have to be is alive in America and you can fall victim to gun violence,” Mr. Thomas said.

This urgent societal issue is acutely personal to the 43-year-old artist, who in 2000 lost his first cousin — with whom he shared an apartment in New York at the time — to robbery and murder. “I remember Songha and I joking about being 21 and black and, like, we made it,” said Mr. Thomas, ruefully. His grief and search for catharsis have been formative to his development as an artist, one who often co-opts familiar cultural imagery to pose nuanced questions about black male identity.

While at the California College of the Arts, where he received his master’s in photography and visual criticism in 2004, Mr. Thomas began “Branded,” his ongoing series of digital “C-prints.” He embossed the Nike swoosh logo repeatedly across a bare torso like whipping marks in “Scarred Chest” (2003), one of his many images drawing parallels between the violence to black bodies during slavery and the physical labor of black athletes generating revenue for universities and team owners.

“Hank uses the language of advertising, whether it’s actual words or the visual language, to think about the underpinnings that move throughout our culture and how those messages can either uplift or in many cases reinforce biases or racist practice,” said Julia Dolan, who curated the Portland exhibition with Sara Krajewski.

With his childhood friend and fellow artist Kambui Olujimi, Mr. Thomas used the G.I. Joes they once played with to re-enact the last five minutes of his cousin’s life in the 2005 stop-motion animation “Winter in America,” on view in the exhibition. “As boys in the United States, we’re given action figures with guns and encouraged to create scenarios based around violence,” he said. “We then turn around and say it’s a shame when gun violence happens.”

Mr. Thomas remembers playing with G.I. Joes in the stacks at the Schomburg Center for Research in Black Culture in Harlem, where his mother, the MacArthur-award-winning curator and photographer Deborah Willis, worked in the 1980s. “Growing up at the Schomburg couldn’t have been a greater subconscious educational experience,” Mr. Thomas said.

In his youth, he met groundbreaking artists including Gordon Parks, the first African-American staff photographer for Life magazine, and credits his mother with spurring his interest in working with archival images — “recognizing an alternative visual history of America than the one that mainstream society celebrates,” he said.

Reprinting Spider Martin’s 1965 photograph of Civil Rights protesters facing off against police on a weathered glass mirror, for instance, Mr. Thomas inserts the reflection of the viewer in the narrative and conflates the past and present. Screening other images of social unrest on retroreflective vinyl, he highlights defiant figures and searing details while shrouding the rest as latent negative.

Only when the viewers use the flash on their phones to alter the silvered surface of these halftones (as they will be invited to do in the exhibition) is the full image revealed.

“Depending on where you stand, the image will look different,” Ms. Krajewski said. “It makes us think about our relationships to these histories, how our backgrounds have positioned us in our lives.”

Mr. Thomas’s sculptural works, too, are based on powerful gestures excised from photographs, including an image of the Rev. Dr. Martin Luther King Jr. wrapping his arms around his wife, Coretta Scott King.

In the artist’s memorial to the couple to be installed next year on the Boston Common, their disembodied embrace will be cast at 22 feet tall in bronze. “We have so many monuments to war and very few monuments to peace and love,” said Mr. Thomas, who lives in Brooklyn with his wife, Rujeko Hockley, co-curator of this year’s Whitney Biennial, and their baby daughter.

The artist was also awarded a fellowship this year by the Gordon Parks Foundation in Pleasantville, N.Y. There, Mr. Thomas’s new retroreflective images based on Mr. Parks’s 1969 autobiographical film “Learning Tree” are on view. “Hank is living and breathing in the footsteps of Gordon Parks,” said Peter Kunhardt Jr., executive director of the foundation.

Mr. Thomas has layered stills from the film dramatizing Mr. Parks’s impoverished childhood in segregated Kansas with ghostly pictures of him as a renowned artist on the set of “Learning Tree” and looking back at his own life through the camera lens. This framing and context is illuminated with the viewer’s flash.

“I’m always interested in the story behind the pictures,” Mr. Thomas said, “and encouraging myself and viewers to think beyond the surface reading.”

The artist’s longtime friend and colleague Wangechi Mutu said she admired the “emotional elasticity and empathetic breadth” that Mr. Thomas brings to whatever idea and medium he tackles, as well as his ability to collaborate.

Ms. Mutu is one of some 800 artists who have contributed billboard designs, among other public artworks, exhibited across all 50 states in civic spaces as part of “For Freedoms,” an artist-run super PAC founded in 2016 by Mr. Thomas and Eric Gottesman.

“Hank’s thinking about the political landscape of the U.S. and the constituents of various space that are in need of the art and activism he charges his work with,” said Ms. Mutu, whose billboard Africa’s Out! was exhibited in Trenton, N.J., during the midterm elections.

Mr. Thomas’s struggles to deal with the death of his cousin, and of so many other African-American men, precipitated another collaboration begun in 2010 called “Question Bridge,” a five-channel video-mediated dialogue between more than 150 black men. He teamed with Chris Johnson, Bayete Ross Smith and Kamal Sinclair to fan out across country, meeting African-American men who would pose questions to their peers on camera, such as, “I wonder, black man, are you really ready for freedom?”

“We had five people answer that question and each one answered it dramatically differently,” Mr. Thomas said. “We were on a mission to try to define black male identity, because it’s so often spoken about in our society, but actually showed that there’s as much diversity that exists within any demographic as there is outside of it.”