“I’m not the most tech-savvy person in the world,” John Slattery said.

He was speaking via Zoom from his house in the Hamptons, and it had taken the whole of an hourlong interview to figure out how to minimize his own bearded face on the laptop screen. Still, he had found a background, a tidy kitchen, that his swoop of white hair didn’t disappear into.

Slattery, 58, arrived in the Hamptons in mid-March, just after completing production on the 10-episode first season of “Next,” a science-fiction drama that premieres Tuesday on Fox. (Just after wrap, a crew member on the show tested positive for Covid-19, but Slattery, who received a test months later, doesn’t seem to have had it.) He has spent the past few months with his wife, son, mother-in-law and dogs, mostly surfing, reading, watching international dramas.

In his new series, Slattery plays Paul LeBlanc, a disgraced Silicon Valley legend who comes to believe that an artificial intelligence system he invented, called neXt, has achieved self-awareness. Also, it has sinister designs on humanity. To put it another way: What if Siri were out to get you?

Oh, and Paul suffers from fatal familial insomnia, a rare, incurable disease that leaves him prey to intense paranoid delusions. “He’s a little crazy,” Slattery said, with typical understatement and the ghost of a Massachusetts accent. 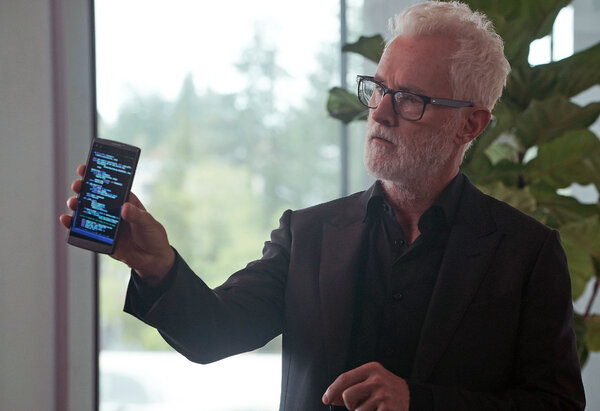 A working actor for more than 30 years, Slattery didn’t really achieve prominence until he was cast in “Mad Men” as Roger Sterling, an epicurean senior partner at a Madison Avenue advertising firm. The role earned him four Emmy nominations and made him, in middle age, a People magazine-certified sex symbol.

During a chat interrupted by occasional barks, he discussed genius, paranoia and the pros and cons of going prematurely gray. These are edited excerpts from the conversation.

Did you always dream that one day you would play a billionaire tech genius with an obscure genetic disease?

It’s exactly what I’ve been aiming for 20 years. Yeah, no, I sure didn’t. But I’m glad it worked out. This guy is erratic and difficult and irascible, and all of that is fun to play.

What’s it like carrying a series? In your “Mad Men” days, you said in interviews you were relieved that the show didn’t rest on your well-tailored shoulders.

I hope it does well. I don’t really feel the pressure of it succeeding, I feel like I’ve done my part. You work as hard as you can, and then you hope for the best.

So what’s your relationship to personal tech? I see you’ve got your little wireless earbuds.

I finally figured out how to use them so I’m not yelling at the screen. I’m not a Luddite. I have a 21-year-old son who looks at me with disdain and motivates me to figure some stuff out. I have a phone and I have a laptop. I have an iPad that I read on, sometimes, if I’m traveling. I had an Apple Watch. But like, who needs to be in contact that much? I certainly don’t.

Do you remember when you realized that your tech was spying on you?

It was just something I bought and then got 50 ads for the next day. I realized, “Oh, that’s what everybody’s talking about.” Maybe it should upset me more, but I’m not doing anything that interesting or illicit that I could give a [expletive] whether it’s watching. It’s weird, it’s intrusive and I find it objectionable. But I don’t do anything about it.

Has this show made you more paranoid?

No, I’m not more paranoid. Probably not as much as I should be. You listen to somebody like [the philosopher and neuroscientist] Sam Harris, he talks about an artificial intelligence that can process information a million times faster than the average human. His example was, if you give this thing a job on Friday and then over the weekend, it learns [the entirety] of human history, then you come back on Monday, do you think it might have a problem with you being its boss?

How did you prepare for the role of a super genius?

I looked at all the usual suspects — Bill Gates, Elon Musk — and then just kind of filed it all away. A lot of [the show] wasn’t written in advance; I didn’t have a lot of information to go on. So, you take a stab and you make some adjustments and you play things different ways. I don’t know that much about the tech side of it. It still isn’t in my bones as much as I would like. And also, playing someone that smart, most of the time they’re not interested in impressing you with how smart they are. They already know they’re smart.

You had been acting for two decades before you landed “Mad Men.” And this is your first series lead. Why do you think it took the industry so long to imagine you in major roles?

Maybe I made a few mistakes or didn’t pull something off. But I guess I’m glad that it happened this way — that I’m still working as opposed to having had success early on. That would probably be harder than the other way around.

You’ve been nominated for multiple Emmys, but haven’t won yet. How does it feel to be always the bridesmaid?

The fourth time in a row that I lost an Emmy, I got in a fight with my wife that night at the party. And I realized, “I guess I’m angry about this.” I was irritated. Mainly because it happens in the first 10 minutes of the show, and you have to sit there for three hours and have everybody tell you what a loser you are.

Now we get to the hard-hitting questions: Was going gray young a good thing for you? Did it make you stand out?

No, it was confusing to people. No one knew how old I was. I would dye my hair all the time. Sometimes I would think, “Well, at least I don’t look like most of the other guys who were 35-years-old with gray hair.” But on the other hand, if they weren’t looking for a gray-haired guy, that was that. “We need the prematurely gray guy!” That never happened.

When “Mad Men” came out you were anointed as a sex symbol, and you were never especially comfortable with that. Why?

What would you do? What would be the first thing you would do once they said, “Oh, you’re a sex symbol.”

Yeah, well, I did that. I bought myself a nice skirt. No, I don’t have a problem with it. I mean, I’m not any more uncomfortable with it than I am with anything else. I’m glad, I guess. I’m glad I’m still here.