Anyone who has strolled along Collins Avenue or Ocean Drive in South Beach knows that Miami is renowned for its colorful, geometric and all-around wonderful Art Deco architecture. But architects — inspired by the city’s tropical surroundings, its embrace of the future and its hedonistic spirit — never stopped creating groundbreaking buildings there. In fact, Miami’s newest wave of designs could be its most ambitious yet.

Fitting for a place that cherishes A-listers, virtually every celebrity architect in the world, and many rising stars, have built there in the last decade. The big names include Frank Gehry, Rem Koolhaas, Zaha Hadid, Herzog & De Meuron, Grimshaw, César Pelli, Richard Meier, Arquitectonica, Rafael Moneo, Jean Nouvel and Bjarke Ingels. The impressive results are scattered citywide, from Miami Beach to the thriving Design District. And if you like parking garages, the city now boasts what is probably the most thrilling collection in the world. 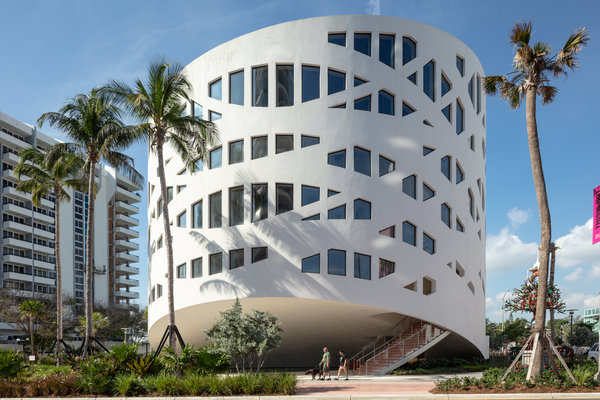 Located near Indian Creek in Mid-Beach, OMA’s Faena Forum, a new arts center, is the heart of a multiplot development that also includes hotels, condos, a retail bazaar and (of course!) a parking garage. The stark white Forum consists of an interlinked cylinder and cube, both cut with varied jewel-shaped windows and containing daylight-filled theaters, exhibit halls and meeting rooms. A large wedge cut under the cylinder opens up a landscaped plaza along Collins Avenue and creates a dramatic entry.

No one has created more stunning new projects in Miami than the Swiss architects Herzog & De Meuron. You may be familiar with their work on what some have called the “Jenga Tower” (56 Leonard) in New York or the de Young Museum in San Francisco. Their most unusual and exceptional building in Miami is 1111 Lincoln Road, a futuristic parking garage along the bustling outdoor Lincoln Road Mall. Its exposed concrete frame, with sharply tapered floor slabs and surprisingly varied ceiling heights, creates a mesmerizing, malleable form that reveals the movement of cars within and creates room for large events. It contains stores on its ground level and even a glass-walled, terraced penthouse on top.

Miami’s skyline has long needed some help, and it’s about to receive an exceptional jolt with the completion of Zaha Hadid’s Architects’s One Thousand Museum. The 62-story luxury condo building stretches upward like an angry alien, morphing and exposing its metallic innards as it hulks over the city. The building’s curved concrete exoskeleton, which becomes thicker and thinner as needed, in fact acts as a structural frame, leaving the high-end units inside virtually column-free. If you’re a skyscraper lover, be sure to also check out Arquitectonica’s zigzagging Icon Bay, in Edgewater, and Bjarke Ingels’s Grove at Grand Bay, a twisting pair of glassy condos in Coconut Grove.

Completed in 2013, Herzog & De Meuron’s Pérez Art Museum Miami (formerly the Miami Art Museum) anchors the downtown waterfront’s 30-acre Museum Park, across Biscayne Boulevard from One Thousand Museum. The intricate edifice features a series of floating concrete galleries, ensconced in thick (sometimes hanging) vegetation, shaded by an intricately gridded canopy. It opens to the waterfront, and an adjacent park, via a wide veranda and open stairs. The museum’s collection focuses on 20th- and 21st-century art from the Americas, Western Europe and Africa, and it holds one of the largest collections of contemporary Cuban art in the world.

The newest addition to Museum Park is Grimshaw’s Frost Museum of Science, which opened last year. From outside, the textured white concrete and colored tile structure looks like a cross between a shimmering computer punch card and a Miami Modern (a tropical, futuristic style also known as MiMo) motel. Inside, the village-like compilation of structures opens purposefully to the elements, centering on an open courtyard filled with breezes. The highlight is an enormous suspended “martini glass” containing a 500,000-gallon aquarium. A globe-shaped planetarium acts as a Death Star-like foil to all this pleasant lightness. Make sure to visit Mr. Pelli’s Arsht Center for the performing arts, just down Biscayne Boulevard, with its stepped, mountain-like masses clad in beige granite.

The Design District, about a 10-minute drive north of downtown, has become a more polished, commercial cousin to the Wynwood Arts District just below it. Its boldest piece yet is Museum Garage, a seven-story, cast concrete structure with capacity for about 800 cars and (soon) ground-floor retail. For its surface, the architect and curator Terence Riley commissioned the designers WORKac, J. Mayer H, Clavel Arquitectos, Nicolas Buffe and his own firm, K/R, to carry out what he calls “Exquisite Corpse,” a mash-up of strange, wildly inspired wall-mounted art pieces. “Ant Farm” combines colorful graphics with perforated peeks at the antlike movement of people and cars behind. “Urban Jam” hangs 45 metallic gold and silver car bodies like Tetris pieces. “Barricades” is a mismatched grid of white and bright orange traffic barriers. And that’s just the beginning.

Just when you thought the delirious parking garages couldn’t continue, enter City View Garage, a 600-car facility (also containing some office and retail) on the edge of the Design District, designed by the architects IwamotoScott and Leong Leong, with murals by the famed artist John Baldessari. The bluish eastern facade of the garage consists of a woven series of diamond-shaped aluminum panels, with apertures of varying sizes. You’ll keep changing your mind about whether they’re two- or three-dimensional. Its western frontage consists of a punched and bent stainless-steel surface, kind of like hanging chads, or a menacing cheese grater. From below, it (appropriately?) recalls the bumpy base of a palm tree, and from inside, it creates a hypnotic kaleidoscope of light and shadow.

The newest addition to the city’s exploding art scene is Aranguren & Gallegos’s permanent home for the Institute of Contemporary Art, Miami. As with the Art Deco legends of Miami Beach, the building’s main facade acts as signage, pulling people in with its geometrically arranged, pearlescent metal panels. Some are set back to make the whole building appear to glow from within at night, while elegant metallic lettering below is an effective branding coup. Inside, galleries fill three flexible, double-height levels, luminously lighted via the building’s all-glass north facade, which opens onto a rear plaza.