KOCHI, India — Clad in a simple striped shirt and the white mundu of the city’s fishmongers, Bashir stood out from the well-heeled throng at the warehouse galleries and tree-filled courtyards on the first day of India’s biggest contemporary art show, the Kochi-Muziris Biennale.

Keeping to himself, he moved from room to room, stopping to study moody landscapes by the Delhi photographer Chandan Gomes that were paired with imaginary scenes drawn by a girl who died at age 12.

“I don’t understand the inner meaning of the art,” said Bashir, who uses one name and makes a living wrapping and delivering fish. “I just like to see beautiful things.”

Bashir’s willingness to engage with the artwork, no matter how challenging, was a victory for the show’s organizers. The southern state of Kerala, and India as a whole, have very few public venues to see art. So the organizers of the biennale, which runs until March 29, strove to create an event that would appeal to everyone — from untutored day laborers to veteran museum curators. 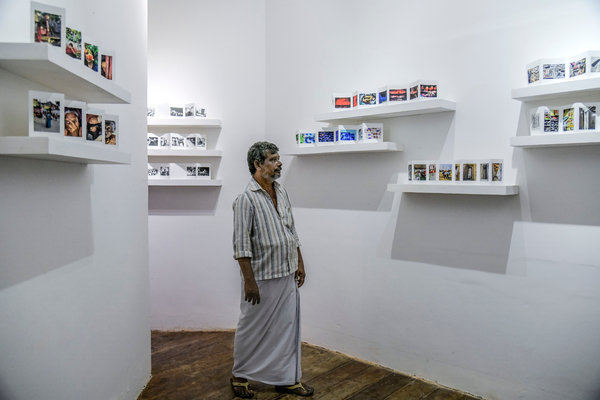 “We are making a cultural festival,” said Bose Krishnamachari, a painter from Kerala who co-founded the show eight years ago. “We have tried to penetrate to the people’s minds so that they feel that it is their biennale.”

Performances by Oorali, a multilingual folk-reggae band from Kerala whose tour bus opens up to become a stage, are mixed in with more cerebral works, such as B.V. Suresh’s “Canes of Wrath,” a dark room filled with representations of slaughtered peacocks, clattering canes and whirling brooms designed to evoke the oppressive tactics of India’s Hindu extremists.

The acclaimed South African artist William Kentridge has been given space for an eight-screen video installation featuring his famous dancing silhouettes. But the biennale’s curator, Anita Dube, also chose to show the works of Bapi Das, a little-known artist from Kolkata, who drives a three-wheeled taxi and sews needlepoint scenes of daily life there.

Many of the works are interactive, and on Mondays, entry to the biennale is free, an attempt to draw in local laborers like Bashir, who would balk at paying the entry fee of 100 rupees, about $1.40. A satellite show supports the next generation of artists, featuring about 130 projects from students across South Asia.

The title of the biennale, “Possibilities for a Non-Alienated Life,” reflects Ms. Dube’s effort to build connections between communities, both in Kochi and beyond.

“In spite of our hyper-connectivity, we are more and more alienated from each other,” said Ms. Dube, a sculptor and art historian. “We need to think of ways that people can be together via culture.”

Kochi, a centuries-old port city formerly known as Cochin, was at various times ruled by the Portuguese, the Dutch and the British. It has long been a melting pot of cultures and religions.

From its first edition, the biennale has tried to reflect that inclusiveness. For this one, Ms. Dube recruited more than 100 artists from India and 30 other countries. More than half are women, and many, like Mr. Das, had received little previous exposure.

Shambhavi, a painter and sculptor from the rural Indian state of Bihar, said that women who are artists had long struggled to get the same attention as men. Her work here — a cluster of 300 sickles and other abstract sculptures of farm life — has no distinct gender cast. “But the farmer's world is very feminine, close to the earth,” said Shambhavi, who uses one name professionally.

Contemporary art can be difficult for audiences anywhere to understand, and especially so in India, a nation of 1.3 billion people with little arts education, few museums and almost no government support for the fine arts.

Galleries and private museums have begun to take root in some cities. The Kerala government is a major sponsor of the Kochi biennale, which cost about $4 million.

However, India’s leaders have generally focused on other needs, such as food and health care for the many Indians who live in deep poverty. The art that does get funded tends to support political goals. The government just spent about $430 million to build the world’s tallest statue — a 597-foot monument to the independence leader Sardar Vallabhbhai Patel by the sculptor Ram V. Sutar — in Gujarat, the home state of India’s current prime minister, Narendra Modi. Two bigger statues, of the ancient king Chhatrapati Shivaji and the Hindu deity Ram, are planned in other states run by Mr. Modi’s party.

“It’s all about railways, more airports, more roads, more high-rises, and now, the biggest statues in the world,” Ms. Dube complained. “Culture is at the back.”

The biennale in 2016-17 drew about 600,000 visitors, and planners hope for 700,000 this time. For Kerala, devastated by flooding from last summer’s monsoons, the show is an economic lifeline that is expected to draw tourists from around the world, some of whom may also visit the area’s beaches or stay on houseboats on its inland waterways.

Some artists here are paying homage to the flood’s victims. Marzia Farhana’s installation, “Ecocide and the Rise of Free Fall,” suspends refrigerators and books salvaged from flooded homes, in a symbolic representation of impermanence. Oorali plans to take its bus on the road and perform up and down the coast, entertaining fishermen who heroically rescued many people from the rising waters.

Shanay Jhaveri, assistant curator of South Asian art at the Metropolitan Museum of Art in New York, attended the biennale’s opening and said he was struck by how the exhibition addresses the political issues of the day without proselytizing.

“It’s about setting up a conversation,” he said. “I don’t think Anita is trying to provide an answer. She is asking, ‘How do we find a way to support each other?’”

After getting off to a slow start on Dec. 12, the show built momentum over the Christmas and New Year’s holidays, when many Indian businesses and schools were closed. The main venue at Aspinwall House was crowded with families taking cellphone photos, and people flocked to “Water Temple,” an outdoor installation by the Beijing artist Song Dong that invites guests to make ephemeral paintings on its walls with a brush and water.

But with some exhibits, the show’s organizers seemed to have miscalculated. The Edible Archives, a cafe across the road from the main event, was designed to be a communal space. Visitors can sample dishes, created by four female chefs, that feature heritage rice varieties from around India. But the price of a rice bowl, around $2, was double what locals would pay elsewhere, dissuading some customers.

Few Kochi visitors were stopping to study the writing on the T-shirts flapping in the wind along Aspinwall’s waterfront, although their political message was directed at their own history: The exhibit, “One Hundred and Nineteen Deeds of Sale,” by the South African artist Sue Williamson, memorialized the names, age, sex and sale prices of Kochi residents captured by 17th-century Dutch traders and sold as slaves in Cape Town, South Africa.

During opening week, Sharif K.M. was busy working, rolling dozens of empty oil drums through the front door of a warehouse onto a flatbed truck. Looming above him was a biennale mural of two giant purple-stained hands by the Nepalese street artist Kiran Maharjan.

Covered in black grease from his boots to his burgundy cap, Sharif, who prefers to use one name, had little time to think about such things.

“Whatever an artist draws has its meaning,” he said, gesturing at the mural. “But I have not understood it yet.”

Just a handful of artists at the show are from Kerala, a sore point for Sebastian Thomas, a retiree who plays the saxophone at a local hotel. He complained about the lack of representation for local craftspeople who make metal mirrors, furniture and pottery. “Working-class art is not really portrayed,” he said.

Still, as the show closed on the first day, Mr. Thomas could not keep his hands off a weaver’s loom that had been restrung like a sitar.

“It’s out of tune,” he declared, as he ran a floppy-tipped wand across the strings. Yet he seemed mesmerized by the unusual tones made by the loom, a collaboration between the Mexican artist Tania Candiani and local instrument makers. “What kind of artist would make music from that?” he wondered. 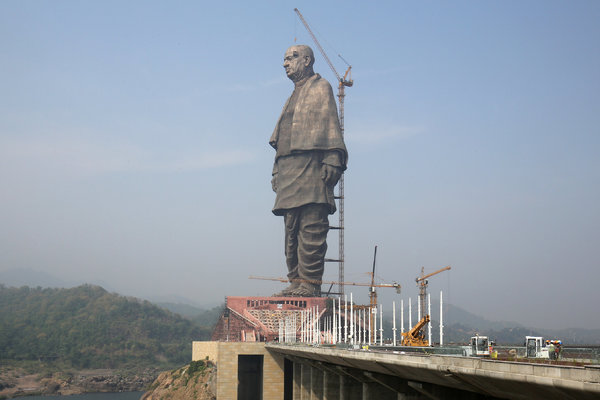 Vindu Goel, a reporter based in Mumbai, India, covers the impact of technology on South Asia’s economy and culture. He previously reported on technology and social media from San Francisco. He joined The Times from The San Jose Mercury News in 2008. @vindugoel • Facebook