Afghanistan is home to 35 million people and the United States’ longest-ever foreign war, with no real end in sight. Many of Afghanistan’s 407 districts are caught in a strange limbo between war and peace, stability and violence. There are districts that the United States-led coalition considers to be under government control that don’t have access to basic rights and services, like education, clean drinking water or local government representation. Then there are districts said to be under insurgent control where you’ll still find a government presence — at least within a certain limited stretch of land. (In such places, residents will say things like: “The government controls 10-15 kilometers around the district center.”) The result for millions of Afghans is a constant sense of uncertainty, fear and doubt. Life under the shaky stability of the Western-backed Afghan government and life under the rule of armed insurgents can be decided by as little as a few miles or a few months.

Take the province of Herat, perched at the western edge of the country, along the border with Iran: Here you have Herat City, the provincial capital and one of Afghanistan’s safest and most bustling cities. Eighty miles to the south is the district of Shindand, whose estimated 200,000 residents live in the fragile and shifting conditions of a contested territory. While there is a government presence in the district center and armed outposts manned by the Afghan National Army, Shindand has been repeatedly ranked as an area subject to “insurgent influence” or “insurgent activity” (the terminology changes) in the United States government’s official assessments of district security. Late Thursday night, two army outposts were overrun in a large and coordinated Taliban attack. Local officials reported that at least 18 soldiers were killed and another 20 were taken captive. In August 2017, I traveled from Herat City to Shindand and saw firsthand how constant attacks in the area had affected the security forces and residents who call the district home.

[Get a weekly roundup of Times coverage of war delivered to your inbox. Sign up here.]

On the insistence of the provincial police chief, we moved in a convoy comprised a police Ranger pickup truck and two armed Humvees. The condition of the vehicles illustrated the difficulties that face Afghanistan’s national security forces, despite the United States footing a $5 billion annual bill to arm, train and sustain their 312,000 personnel. In the Humvee where I sat, one layer of glass in the front windshield was cracked; scraggly lines streamed from a cylindrical hole, where it looked as if a bullet had struck. A police officer struggled to keep the heavily armored and padded door shut. The interior bore the marks of a makeshift armored vehicle: Exposed, uncapped bolts showed where giant metal plates had been added to the sides. On the floor a stack of wooden slabs made a perch atop which the gunman stood to watch the road from where the turret should have been.

In Shindand’s district center, the market lies along a main road that is only partially paved. Simple stores were selling everyday goods: fruits, vegetables, colorful synthetic fabrics, electrical and plumbing supplies and inexpensive tableware. When a motorcycle whirred past, people on the streets immediately looked over their shoulders. The Taliban and other armed groups sometimes use motorbikes to speed by and shoot people standing on the streets. In 2012, Taliban gunmen on a motorbike assassinated the district mayor. 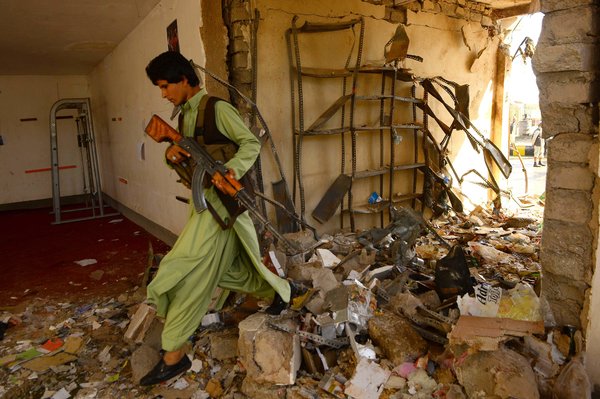 Shindand is situated along one of the main routes for the smuggling of illegal arms and illicit drugs by the armed opposition and corrupt officials. In 2017, the United Nations reported that Shindand was one of two districts accounting for most of the 2,700 acres of opium-poppy fields in Herat Province. Infighting among Taliban factions in the district adds to the violence and insecurity. In March 2016, three days of fighting between two warring factions left more than 100 people dead in Shindand. In August, people were afraid to celebrate Afghanistan’s Independence Day, because it would mean raising the country’s tricolor flag in the shadow of the Taliban.

When we arrived at the office of Hekmatullah Hekmat, the district governor, he wasn’t there. He was in Herat City, where he spent most of his time, according to some of his constituents I spoke to in Shindand. The walls and windows of his office were riddled with bullet holes. We eventually met with him at his office in Shindand, where he admitted that his district was under constant threat. “Our main problem is simple; the armed opposition is here,” he said. “They come on motorcycles, strike where they want and then take off. It’s all so random. It doesn’t even seem as if they have a clear strategy, they just want to kill our people.” Local security forces don’t have the resources to contend with the constant threat. A local police official said that his forces had diminished by more than 80 percent over the past year, as the government went forward with a plan to subdivide Shindand into several districts.

As of late 2017, the Taliban controlled 219 schools in Herat Province. An education official told a local news outlet that the department of education could not even monitor schools in Shindand because of security problems. The fear of a Taliban attack was a reality that Nawid, a 14-year-old student, knew all too well. Though there are about 100 schools in the district, Nawid said that he and other students rarely attended, because of security fears. “Most of us only go on test days,” he said. The roads leading to the schools were too unpredictable.

Toryalai, a 24-year-old university student, initially tried to discredit the young man’s fears. “Tell the truth,” he said. “There are schools, but you all just don’t go.” But then he reconsidered. There had been an attack just before my arrival, and he had witnessed it. It embodied the kind of violence that has kept thousands of students from pursuing an education in a nation struggling to deal with a 36 percent literacy rate. “With my own eyes I saw four people killed by armed men,” Toryalai said. He had no idea who the gunmen were. “They could be Taliban, they could be anybody, all we know is that there are too many men with guns running around here.” It took the district’s police officers 30 minutes to reach the scene, he said. “By then, the gunmen had fled, and we had already transported the bodies to the hospital ourselves.”

Despite the violence and uncertainty, the people of Shindand were doing what millions of have done for decades in Afghanistan: They were going on with their lives. Shopkeepers were still tending to their shops, and electricity was functioning for at least a few hours a day. Children were still trying to attend the schools that remained open, and families were still making the journey to the city of Herat through territory that residents of neighboring districts described as being “full of bandits and Taliban.” That was what Shindand district looked like a year ago, with a security rating that the United States government’s report uses to indicate that insurgents “control most of the key infrastructure” and “collapse of the district is expected.” With the attacks last week, that expectation may be closer to being fulfilled.

Ali M. Latifi was born in Kabul and raised in California. He is currently based in Kabul.