BRENTWOOD, Md. — Tomas Guevara fell in love with Ruth Ayala years before they met. Her brothers — like Mr. Guevara, Salvadoran immigrants living outside Washington — talked about her at church. She was hardworking and kind, they said, devoted to her family and her faith.

Then Mr. Guevara saw Ms. Ayala’s photo; her big brown eyes, her warm smile. He decided to give her a call.

At the time, Mr. Guevara had been living in the United States for six years. Bright and ambitious, he left El Salvador in 1999, at age 18, thinking there were few opportunities for him at home. His country had been a casualty the year before of Hurricane Mitch, which decimated Central America, leaving more than 10,000 dead.

Mr. Guevara trekked through Mexico, stopping in towns along the way to pick up odd jobs. In 2001, he swam across the Rio Grande, and applied and was approved for temporary protected status, a program that allows citizens of certain countries affected by natural disasters, armed conflict or other strife to live in the United States.

He settled near relatives in Maryland and worked construction jobs by day while studying English, earning a high school equivalency diploma and learning plumbing at night. He became a licensed plumber and sent money back to his family in El Salvador. But he was lonely. Then he called Ms. Ayala.

The conversation flowed easily. “I could tell she was sincere,” Mr. Guevara, now 37, said through an interpreter in an interview last month at his family’s home, outside Washington. 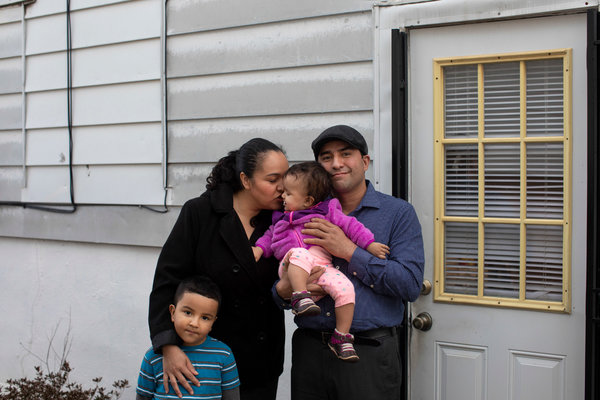 Soon the couple was talking for hours each night before bed. Four years later, Mr. Guevara traveled back to El Salvador with a ring in his pocket. The couple married in 2011 in San Salvador and spent three happy months together before Mr. Guevara had to return to the United States.

Mr. Guevara returned to El Salvador about once a year to see his wife. After she became pregnant, the distance between them took on new poignancy.

“It was a very emotional time,” Ms. Ayala, 35, recalled, through an interpreter. “I was so happy to finally become a mother, but, of course, it was difficult because you want your husband to be there to support you.”

In 2013, Ms. Ayala gave birth to a son, Isaac, while Mr. Guevara, 3,000 miles away, waited for news. During their nightly chats, Ms. Ayala would put the phone to Isaac’s ear so he could hear his father’s voice. She sent photos and videos each day. When Isaac was 9 months old, Mr. Guevara traveled to El Salvador to meet his son, holding his hands as the child took his first toddling steps along the beach.

When Mr. Guevara returned to Maryland, he began researching ways to bring his wife and child to his new home. He turned to the International Rescue Committee, one of the eight organizations supported by The New York Times Neediest Cases Fund.

A caseworker told him about the Central American Minors program, begun in 2014, which allowed the children of parents with temporary protected status to apply for permanent residency as refugees. As Isaac’s mother and Mr. Guevara’s wife, Ms. Ayala was also eligible.

“The program for refugees was a light for us,” Ms. Ayala said. She felt unsafe in El Salvador as gang violence and crime increased. The country’s homicide rate in 2015 was more than double the 2013 rate, though it has since decreased.

In the fall of 2016, Ms. Ayala and Isaac boarded a plane to the United States. It was the first trip to America for both of them. “I felt so many emotions,” she said. “Great joy and excitement, but also sadness to leave everyone behind. All I had was my suitcase and my son.”

Mr. Guevara, meanwhile, had been working to prepare a home. He rented a small apartment and bought furniture, cooking utensils and toys. “It was a dream come true,” he said. “I got everything ready for us to start our lives as a family.”

Ms. Ayala registered for English classes at a community college. She soon found a job with Hispanos Sin Fronteras, or Hispanics Without Borders, which helps people with career placement. Isaac adjusted easily, learning English, becoming enamored with “Paw Patrol” and racing around the parking lot behind their home.

Early last year, the family grew again with the birth of a daughter, Rebecca. Now cans of baby formula sit next to plumbing manuals and English textbooks in the family’s sparse apartment.

But the family fears their safe and stable home is threatened. In January 2018, the Trump administration announced that temporary protected status for people from El Salvador would end in September 2019. More than 200,000 Salvadorans who have lived in the country since 2001 would be affected by the decision. They must either return to El Salvador or be approved for another immigration program.

In October, a federal judge blocked the termination of the protected status for Salvadorans, but the administration is appealing.

Mr. Guevara and Ms. Ayala have again turned to the International Rescue Committee for assistance. Mr. Guevara has applied for permanent residency. If his application is not approved, they are not sure what they will do. Friends from El Salvador also living in the United States have begun selling off belongings to prepare to move to Canada.

The family believes they belong in their adopted country, where their daughter is a citizen. They dream of buying a home in the suburbs with a big lawn for the children. Mr. Guevara hopes to start his own plumbing company and teach others the trade. They try to protect Isaac from their worries about Mr. Guevara’s immigration status.

“We’re very hopeful that my husband’s application will be approved,” Ms. Ayala said. “God has been very good to us. We’re very hardworking people, and we just want to continue working hard for our family.”