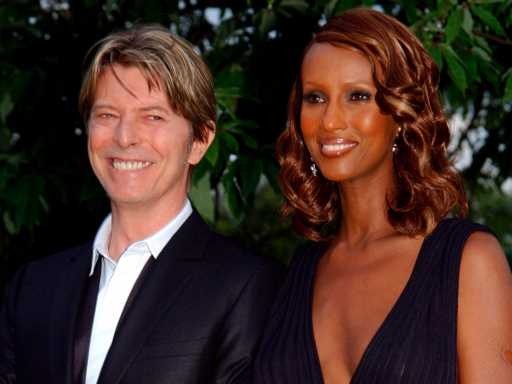 Even five years after her husband’s death from liver cancer, Iman has a very clear view of their marriage to ever consider anyone but David Bowie as her spouse. Their beautiful love story is what keeps her motivated knowing that at some point, she will be reunited with him in death.

That was the heavy thoughts the supermodel dropped to Hoda Kotb on Wednesday’s Today Show. She had a very specific response to the TV personality, asking if she would ever marry again. “No,” she firmly responded. “People say to me when they talk, ‘Oh, I loved your late husband,’ and I said, ‘He’s not my late husband, he’s my husband,’ so that’s how I feel about it. This was truly the love of my life, and I just wait until I meet him again.”

The couple’s romance began in Los Angeles in 1990 and it was love at first sight for both of them. After going through two divorces before meeting the musician, Iman knew exactly why Bowie was the right man for her. “We met late in life, and had been married before and had older children, so this was a choice, and he felt very safe at home with us,” she explained. Their love was so real that their only daughter together, Alexandria Zahra Jones, 21, had a great model for marriage growing up. “My daughter has witnessed the love between the two of us that she actually says now, ‘I hope to God that I’ll meet a man who would love me as much as my dad loved my mom,” added Iman.

Even in her grief, which she admits delivers “days that are harder than others,” she’s sticking with “the remembrance of the joy.” And Iman had Kotb in tears when she shared this beautiful thought about grief. “I think at the end of our days, the only thing we will have if we are lucky is our memories,” she summed up. “That’s the thing that we will have and will sustain us after the person passes away.