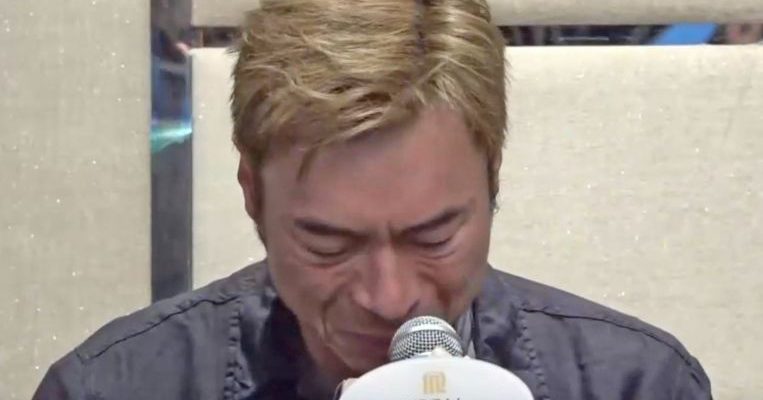 Hong Kong singer Andy Hui has called himself “very disgusting” after he was caught cheating on his superstar wife, Sammi Cheng, known for pop classics such as Worth It.

At a press conference last night, Hui admitted to a dalliance with 30-year-old TVB actress and former Miss Hong Kong first runner-up Jacqueline Wong. He also said he will put his work on hold until he finds his “real and right self”.

Hui, 51, was caught on camera holding hands and kissing Wong in the back seat of a taxi. Known for such hits as Who Can I Love, he has been married to Cheng, 46, since 2014. The two do not have children.

Wong and fellow TVB actor Kenneth Ma, 45, have been dating openly since 2017.

Hours later, Hui showed up for a tearful seven-minute appearance. He kept his head bowed throughout and swallowed a sob before saying: “Sorry, Sammi.”

He began the press conference with a deep bow and said: “I want to apologise to my family, Sammi’s family, friends and people who love me. Because I did what I cannot make up for, something that will not be forgiven.”

After I saw the report, I found myself very shameful, very wrong, very bad, very disgusting and very unfamiliar. I reflected on why I could not control my lust.

HONG KONG SINGER ANDY HUI, who was crying during the press conference.

I have no soul. I am a broken man. I hope everyone can give me time to find myself.

HUI, towards the end of his speech. He has said that he will put his work on hold until he finds his “real and right self”.

Through bouts of crying, Hui explained: “I drank a lot that night but I feel that being drunk is definitely not an excuse to do something so wrong. After I saw the report, I found myself very shameful, very wrong, very bad, very disgusting and very unfamiliar. I reflected on why I could not control my lust.”

In the reportedly 16-minute video that was leaked, Hui and Wong initially share a cab with another man, who alighted first. Before the man exits the cab, Hui can be heard assuring the man that he and Wong will go home separately.

After the man leaves, however, Hui and Wong provide only one location to the driver and begin holding hands. At one point, Wong leans over to kiss Hui as his hand rests on her thigh.

According to the Hong Kong media, they later left the cab together.

While Hui did not comment on his wife’s reaction or their mariage going forward, he said: “I hope that in the future, everyone I hurt, everyone I pained, can be well.”

As his speech neared the end, he said: “I have no soul. I am a broken man. I hope everyone can give me time to find myself. “

He gave another deep bow and left, ignoring all questions.

Netizens have flooded Hui’s Instagram page to express their anger and disappointment, with many asking him to quit the entertainment industry.

He posted a similar apology at about 7pm on his Instagram with a picture of a black background.

Wong has disabled comments on her Instagram page, which has more than 600,000 followers.

Cheng’s latest Instagram post on Sunday about an eye care supplement has garnered more than 3,300 comments, mostly posted yesterday, asking her to stay strong, with some encouraging her to leave Hui.

Hui and Cheng have had a dramatic love affair for close to 30 years.

Cheng, also known for her acting roles in movies such as Love On A Diet, began dating Hui in 1991 after they recorded the duet Actually, Do You Have Me In Your Heart.

Their relationship was once described by comedian Dayo Wong as “Hong Kong’s last fairy tale”.