LONDON — Many elements need to come together to create an opera that will absorb the attention of an audience, including the costumes, be they bodices and ball gowns for divas or admiral’s uniforms for baritones.

As the head of costume for the English National Opera, Sarah Bowern supervises a crew that can swell to 80 people filling roles like costume makers, milliners, dyers, dressers, makeup artists and wig managers. The company performs in English in the 2,359-seat London Coliseum in the West End.

Ms. Bowern, who is now supervising work on a production of “H.M.S. Pinafore” set to open in October, is based at the opera’s rehearsal space in West Hampstead, in the building where Decca Records auditioned, then rejected, the Beatles in 1962. The following interview, conducted by email, has been edited and condensed.

No day is the same. I like to check in on the team first thing. If I am supervising a show I may be fabric sampling in London, meeting with designers and freelancers. I am always looking at the costume budgets and staffing levels. It’s a mixture of creative work and organization. If we are rehearsing onstage, I may spend the evening in the theater taking notes with designers or just being there to support the team. 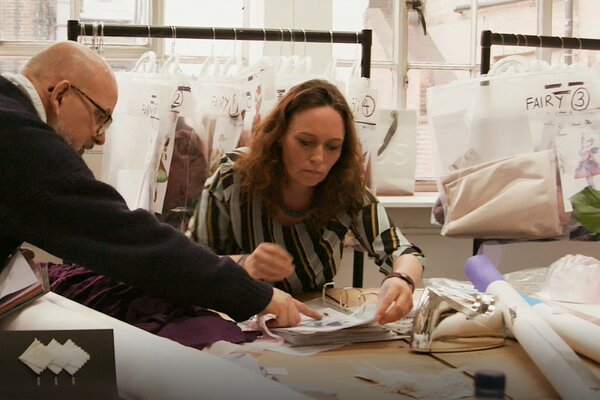 Are you behind the curtain on opening night to make sure everything still fits?

Yes I am. I like to walk around backstage and check that everything is OK before watching the show. Our dressers stand guard, side of stage — like costume police — to check that everyone is wearing everything properly. We have running wardrobe staff who will maintain the costumes throughout the run, including repairs.

Your most memorable project?

“Benvenuto Cellini” in 2014 was probably my favorite production. It was directed by Terry Gilliam and was pretty crazy at times, but thrilling too. Katrina Lindsay designed the most beautiful costumes. It was an enormous show with over 500 costumes, hats and wigs. It was a lot of hard work, but a real showcase of our skills.

“Iolanthe” in 2018 was both difficult and rewarding. It was exquisitely designed by Paul Brown, but he became gravely ill and passed away during the production process and sadly didn’t get to see his designs realized.

The camaraderie across all departments to honor his designs and make them as beautiful as possible was wonderful.

Any tricks of the costuming trade you can share?

A bit of a stretch in some fabrics is very helpful. Especially for any dancers in a production. Many fabrics that look like normal silk or wool will now have a percentage of Lycra or similar in them. I have found that opera singers are much more physical these days; they are asked to do much more in their performances, so we have to be mindful that the costume will allow them the freedom to move comfortably.

We try to get the performer to move as much as possible in the costume fitting so we can deal with any issues before we are onstage, but often we don’t discover and solve any real issues until the stage rehearsal period directly before a show opens.

A lot of our jobs cross over. Our milliner will make hats and masks but also jewelry and props. Our dye department obviously dyes fabrics, but probably the most key part of their job is “breaking down” the costumes: distressing them so they look old and worn.

Is costuming for opera different than for a play?

Depends on the singer. For example, many singers I have costumed may like to wear a corset or boned bodice very tight so they can push their diaphragm against it. Others find it quite restricting, in which case we may use some elastic or Lycra to allow more movement. When we take measurements we do an expanded chest sizing, so a performer will be comfortable, and to avoid unfortunate ripping of a jacket seam when a tenor launches into a climactic aria.

We do take care of shoes. We have thousands of pairs of shoes that we reuse on many productions. It’s not that unusual for a singer to be wearing their slippers in the dressing room and get called to stage but forget to put their costume shoes on. We have often had a stage call for a “member of wardrobe to bring someone’s shoes to stage left immediately.”

How would you describe your personal style?

Oh, it’s really pretty boring. I wear loads of black and muted colors. I love the ’30s and ’40s as a clothing period, and maybe if I didn’t work in costume I’d wear tea dresses and gabardine coats. But it would be a bit like wearing a costume.