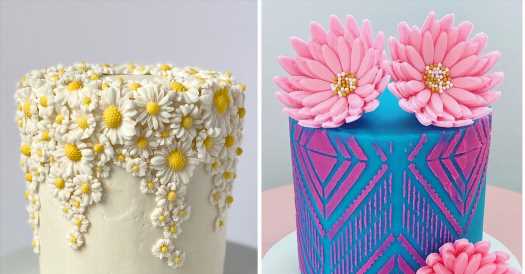 Katherine Walton, the owner of Walton Cake Boutique in Sydney, Australia, has been sharing her creations on Instagram since 2018 but in the early months of the pandemic she noticed a new baking movement rising online — a surge in a specific type of online baking collaboration called “collabs.”

“I saw that more and more people were actually joining collabs and creating collabs,” she said. “And I thought, well, you know, I feel like I’m really missing out.”

In May 2020, Ms. Walton, 40, created an Instagram page dedicated to documenting and facilitating these collaborations called @NeverMissACollab. She is now part of a niche movement in the cake community that has developed a creative way of baking together — entirely on Instagram — even when people are hundreds or thousands of miles apart.

While the term “collab” has been used as slang for all sorts of online projects, in baking parlance collabs suggest a very particular ritual. A “host” announces one built around a theme — for example, wizards, cat creations or edible flowers — then creates a graphic and circulates the details to their followers.

Other bakers who want to participate message the host and ask to be added to a private chat. These bakers then encourage one another, using the theme as inspiration. On a specific date everyone in the collab posts photos of their results, tagged with that collab’s hashtag.

Though each participant is toiling in a separate kitchen with their own resources, a temporary community forms around a specific baking assignment. “It’s about people wanting to be educated on how to create something or how to bake something or if they’re having issues with something they’re creating,” said Ms. Walton. In the private chats, she explained, “you get to know the people quite well. People will come and share photos of their families. It’s not just, ‘Here’s my creation.’ We create a lot of friendships.”

Interest in baking surged during the pandemic, in part because it’s a comforting activity that you can do alone without leaving your house. And as millions of young people found themselves marooned inside and at home, this newfound interest inevitably spilled over to Instagram.

The rise of collabs helped turn the platform into a hub for new creative partnerships, connecting bakers around the world in common projects: swapping tips, comparing notes and egging each other on.

Roni Mevorach, a 20-year-old university student living in Birmingham, England, hosted a New Year’s Eve-themed collab along with eight other bakers she had met through a group chat.

“I just remember being shocked at how many people there were suddenly posting about their bakes,” she said of her experiences at the beginning of the pandemic, when she created her baking Instagram page at the suggestion of her dad after her exams were canceled. “And how many people were interested in each other’s baking. It was really, really nice. It felt like there was a little world of people that you could talk to — despite not really being able to talk to anyone.”

Ms. Mevorach also used baking as a way to reconnect with her Jewish heritage, shaping loaf after loaf of rich, glossy challah bread with streaks of cinnamon, stuffing them with apples and honey or chopped dark chocolate and orange zest. Her grandmother, who lives in Tel Aviv, became one of her key collaborators, joining her on Instagram Live to showcase her techniques for making her “famous chocolate cake,” her English cake and her apple cake.

“Oddly, she was very up for it. She didn’t fully understand what she was getting herself into,” Ms. Mevorach said. “But I think she was just very happy to have any opportunity to virtually hang out with me.”

While many collabs have been lighthearted, bakers during the pandemic also used their creativity to highlight political issues. Faria Malik, a 27-year-old baker in Vancouver, Canada, created a watermelon-themed collab that explored how the fruit has been central in harmful historical stereotypes about both Arabs and Black Americans. The colorful summer fruit, she wrote, can be reclaimed to represent freedom — a symbol of “Palestinian resistance as well as Black liberation.” The collab gave her an opportunity to connect with other Muslim bakers, and it inspired watermelon-themed macarons, cupcakes and layer cakes.“I feel like every single one of us can use our unique positioning to talk about whatever issues are proximal to us,” said Ms. Malik. “So, for me, of course, Islamophobia, hate crimes and Palestine have been on the forefront of my mind for months.”

There have been other real-world challenges that come with the collabs, including a pandemic-related scarcity of ingredients in early 2020.

“Suddenly everywhere was sold out of sugar and butter,” said Ms. Malik. She’s seen bakers in collabs decorating tin cans or sides of boxes and she’s resorted to using Styrofoam cake dummies so she could still take part in cake-decorating collabs without using up her own precious resources.

While collabs tend to be dominated by the traditional side of the Instagram baking community — where perfect-looking layer cakes in bright, primary colors are usually in the spotlight, along with impeccably piped rosettes — online baking friendships have also spurred cutting-edge experiments as bakers prod each other toward ever more experimental results.

Sara Sarmiento, a 26-year-old illustrator in Brooklyn, is the founder of @_hoe_cakes_, an Instagram page on which she collects photos of “ephemeral” cakes. Some feature irreverent messages in icing (“RIP Prince Philip” and “Beyoncé won’t answer my DMs”) while others are quirky confections that might be dismissed by conventional bakers as messy or ugly.

In the early months of the pandemic, Ms. Sarmiento joined a Zoom event organized by the Instagram page @cakeforsport in which bakers were encouraged to treat their creations as sculptures. “Everybody had brought whatever they had from all over the house,” said Ms. Sarmiento. “It didn’t have to be edible.” Later in the year, she worked with @lushsuburb, making a birthday cake to throw into the ocean as an art performance.

One of her favorite online bakers is Belly Millan, 22, who is 800 miles away in Chicago. As a child, Mx. Millan was an enthusiastic baker who’d hold bake sales along with a best friend, Sam, on the corner of their block. “She was my next-door neighbor and she taught me everything I know about baking,” said Mx. Millan. “We’d make homemade caramel corn, homemade butterscotch pie.” But their time together was cut short. When Mx. Millan was 15, Sam died.

“I was turned off from baking or anything that reminded me of her. But actually in this pandemic, I got really into baking again,” said Mx. Millan. For them, the pandemic offered a way to connect to the happiest days of their youth, while collaborating with a queer community on Instagram, creating glittering cake creations topped with turmeric frosting, piles of edible flowers and handfuls of dried kiwis, blueberries and oranges in blissfully bold colors.

Ms. Sarmiento believes that cakes are a natural magnet for forming communities. “Cakes have a collaborative nature in general, because it’s for sharing, it’s for parties,” she said. “I think cake-making is a perfect catalyst for artistic collaboration.” She sees another explanation for the popularity of collaborative online baking. “Baking is hard. There are a lot of tips and tricks, and you can really learn a lot from your fellow creative people.”