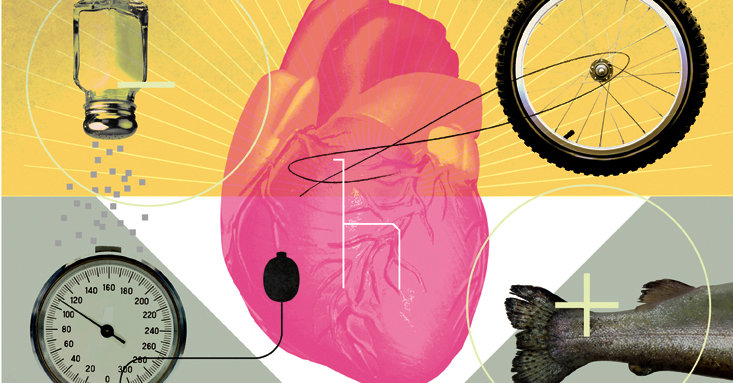 A century ago, the scientist Karl Pearson was studying cemetery headstones when he noticed something peculiar: Husbands and wives often died within a year of one another.

Though not widely appreciated at the time, studies now show that stress and despair can significantly influence health, especially that of the heart. One of the most striking examples is a condition known as Takotsubo cardiomyopathy, or broken-heart syndrome, in which the death of a spouse, financial worries or some other emotional event severely weakens the heart, causing symptoms that mimic a heart attack. This emotional burden transforms the heart into a shape that resembles a traditional Japanese pot called a Takotsubo, which has a narrow neck and a wide bottom.

The link between emotional health and heart health is the subject of a new book, “Heart: A History,” by Dr. Sandeep Jauhar. Dr. Jauhar, a cardiologist, traces the history of cardiovascular medicine and explores its remarkable technological advances, from open-heart surgery to the artificial heart. But while these cardiac innovations have been transformative, Dr. Jauhar argues that the field of cardiology needs to devote more attention to the emotional factors that can influence heart disease, like unhappy relationships, poverty, income inequality and work stress.

“I think the iterative technological advances will continue,” he said. “But the big frontier is going to be in marshaling more resources to address the intersection of the emotional heart and the biological heart.”

Dr. Jauhar’s interest in this subject stems from his family’s malignant history with heart disease, which killed several of his relatives. As a young boy, he heard stories about his paternal grandfather, who died suddenly at the age of 57 when a frightening encounter with a black cobra in India caused him to have a heart attack. He became fascinated with the heart but also terrified of it. “I had this fear of the heart as the executioner of men in the prime of their lives,” he said.

After medical school, he did a cardiology fellowship and became the director of the heart failure program at Long Island Jewish Medical Center, as well as a contributing opinion writer for The New York Times. At the age of 45, Dr. Jauhar had his own brush with heart disease. Despite exercising regularly and leading a healthy lifestyle, an elective procedure called a CT angiogram revealed that he had blockages in his coronary arteries. As he reviewed the radiographic images of his heart, Dr. Jauhar came to a startling realization.

“Sitting numbly in that dark room,” he writes, “I felt as if I were getting a glimpse of how I was probably going to die.”

The heart is both a simple biological machine and a vital organ that many cultures have revered as the emotional seat of the soul. It is a symbol of romance, sadness, sincerity, fear and even courage, which comes from the Latin word for heart, “cor.” The heart, simply put, is a pump that circulates blood. But it is also an astonishing workhorse. It is the only organ that can move itself, beating three billion times in the average person’s lifetime, with the capacity to empty a swimming pool in a week. This is why surgeons did not dare to operate on it until the end of the 19th century, long after other organs had already been operated on, including the brain.

“You can’t suture something that’s moving, and you couldn’t cut it because the patient would bleed to death,” Dr. Jauhar said.

In his new book, Dr. Jauhar tells the stories of the intrepid doctors who pioneered cardiovascular surgery in the late 19th century, cutting open patients to deftly repair acute wounds with needles and catgut before quickly closing them back up to avoid heavy bleeding. More complicated procedures, however, necessitated more sophisticated machinery. Surgeons needed a device that could take over the job of the heart so they could temporarily stop the organ from beating and cut into it to repair congenital defects and other chronic problems.

That led Dr. C. Walton Lillehei to develop cross-circulation, a procedure in which a heart patient was hooked up to a second person whose heart and lungs could pump and oxygenate their blood during long procedures. Dr. Lillehei practiced cross-circulation on dogs before finally trying the procedure on humans in 1954. Like other heart surgeons who would advance the field through risky procedures, Dr. Lillehei faced enormous criticism as he tried to break new ground.

“His critics were aghast,” said Dr. Jauhar. “They said, this is the first operation in the history of mankind that could kill not one but two people.”

Some of Dr. Lillehei’s patients survived. Others succumbed to infections and other complications. But the work he did allowed others to develop the heart-lung machine, which today is used in more than a million cardiac operations around the globe each year. Since then scientists have developed procedures that bypass or prop open diseased coronary arteries, as well as implantable cardiac devices and heart medications that save millions of lives annually.

Nationwide, heart disease is still the leading killer of adults. But cardiovascular medicine has grown by leaps and bounds: Mortality after a heart attack has dropped tenfold since the late 1950s. Yet the role that emotional health plays in the development of the disease remains largely underappreciated, Dr. Jauhar says. He traces this to the landmark Framingham Heart Study, started in 1948, which followed thousands of Americans and identified important cardiovascular risk factors like cholesterol, blood pressure and smoking. The Framingham investigators initially considered looking at psychosocial determinants of heart disease as well, but ultimately decided to focus on things that were more easily measured.

“What came out of it were the risk factors that we now know and treat,” Dr. Jauhar said. “What was eliminated were things like emotional dysfunction and marital health.”

That, he says, was a mistake. In the decades since then, other studies have shown that people who feel socially isolated or chronically stressed by work or relationships are more prone to heart attacks and strokes. Studies on Japanese immigrants to America found that their heart disease risk multiplies. But those who retain their traditional Japanese culture and strong social bonds are protected: Their heart disease rates do not rise. Dr. Jauhar argues that health authorities should list emotional stress as a key modifiable risk factor for heart disease. But it is much easier to focus on cholesterol than emotional and social disruption.

According to some studies, doctors give their patients about 11 seconds on average to explain the reasons for their clinical visit before interrupting them. Since writing the book, Dr. Jauhar has a newfound appreciation for letting patients talk about the things that are bothering them so he can better understand their emotional lives. He has also tried his hand at new habits to help reduce stress, like yoga and meditation. He exercises daily now, spends more time with his children, and is better able to relate to his patients since discovering his own heart disease.

“I used to be so wrapped up in the rat race that I was probably putting an inordinate amount of stress on myself,” he said. “Now I think about how to live a little more healthfully, to live in a more relaxed way. I have also bonded more with my patients and their fears about their own hearts.”

Anahad O’Connor is a staff reporter covering health, science, nutrition and other topics. He is also a bestselling author of consumer health books such as “Never Shower in a Thunderstorm” and “The 10 Things You Need to Eat.”