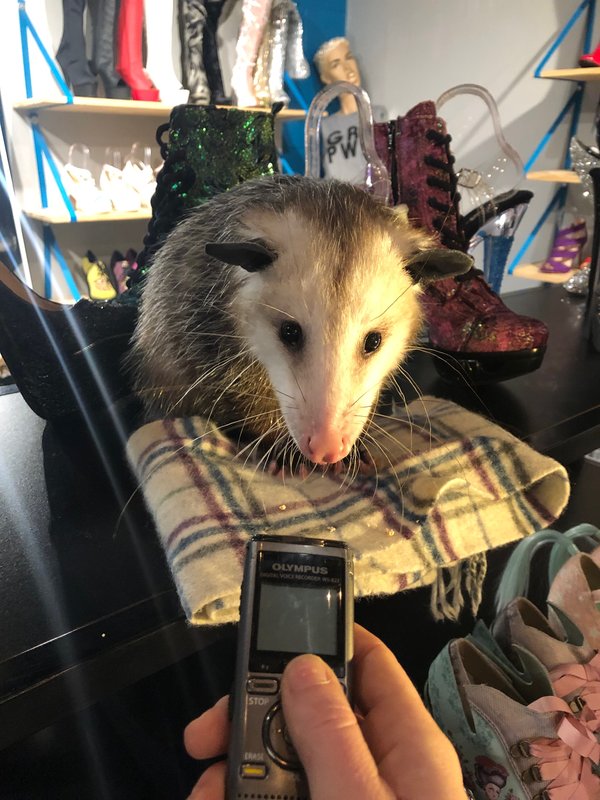 The reporter Gray Chapman was already endeared to opossums when she first spotted the pointy-faced, small-handed marsupials in her social media feed.

“We have a couple of opossums that hang out near my back yard that I’ve tried to lure with orange peels,” said Ms. Chapman, who wrote about them for a story in Thursday’s Styles section: “The Cutest Animal on Instagram Is Possibly in Your Trash Can.” It introduced the world to “verminfluencers”: the “quintessential millennial pet.”

Ms. Chapman was speaking by phone outside a coffee shop in Atlanta, where she works full-time as a freelance writer. She is interested in the interaction between humans and animals (and has two dogs herself, who often make it onto her Instagram page). Her first article for The Times was on Breyerfest, the festival where people in love with horses, both real and plastic models of them, gather to delight in their passion.

“I love any subculture that is united around a really specific shared obsession,” Ms. Chapman said.

She had recently developed a thing for vermin.

“I think they are hilarious because they are so heinous-looking, in an endearing way,” Ms. Chapman said.

And she knew she wasn’t alone. Her reporting showed that raccoons, skunks, prairie dogs, pigeons and opossums were developing major followings on YouTube and Instagram. Their owners were also monetizing their images with items like candles, socks, and totebags.

Once seen as a nuisance, these animals are being transformed by their own internet subculture into a source of joy.

Ms. Chapman sent the pitch to Alexandra Jacobs, a deputy editor in The Times’s Styles section, in January. Ms. Jacobs was intrigued.

“I knew about all of the fancy animals. I post pictures of my own cat,” she said.

She said the reporters and editors in the Styles section are interested in exploring how social value is assigned, and how this social value can often be arbitrary. Questions like: How did arugula go from being a weed to, well, arugula — with a long “u”? And how did a marsupial get a million followers on Instagram?

(That doesn’t mean any old meme is fair game. Ms. Jacobs said she has a high bar when it comes to accepting pitches for articles inspired by social media trends.)

She also had a bit of insight into quirky pet ownership. “I remembered that my former very hip colorist used to have a pet rat,” Ms. Jacobs said.

But Ms. Chapman told her nicely that the vermin go above and beyond the rat in peculiarity — and therefore reflect something new. “I think the rat is more of a gateway drug to this kind of pet,” Ms. Chapman said.

“This idea that the rat is old hat was startling, and I was like, ‘Wow, I’m going to learn something,” Ms. Jacobs said. “‘Go get it.’”

What she, and readers, learned was that these once-rejected creatures are being rebranded. As Ms. Chapman wrote, “Raccoons become “trash pandas”; opossums are “trash cats”; skunks are “fart squirrels.” Verminfluencers, as a category, combine millennial playfulness with a desire to find beauty in the banal.

In the future, Ms. Chapman wants to continue documenting the relationship that humans have with wildlife.

“I was flipping through a trade journal for pest control companies and I got really into Canada geese,” she said. “I thought previously I hated them. They are gross, and they’re filthy,” she said.

Then she came across an article exploring how airports and schools are using dogs to deal with the population. She’d like to do a ride-along with a goose-dog company: “Looking at the compromises that happen between the so-called nuisance animals and humans,” she said.

Katie Van Syckle is a senior staff editor at The Times. @KatieVanSyckle