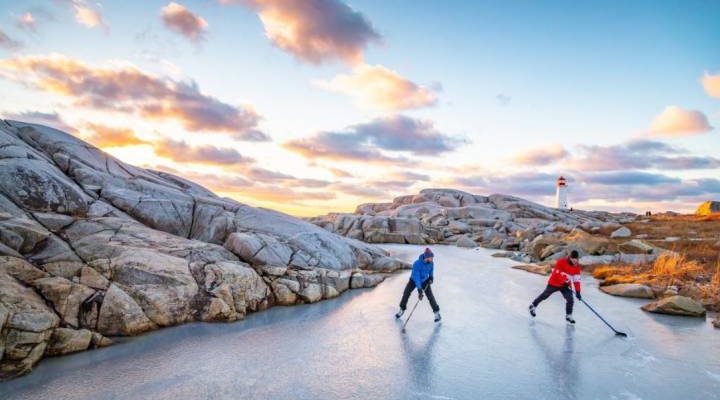 A Halifax photographer has engineered an iconic Atlantic Canadian winter scene: A pick-up hockey game set against the backdrop of Peggy’s Cove at sunset.

Adam Cornick said he’s received a “phenomenal” response since posting the shot to his Facebook page on Monday, with people excitedly sharing the nostalgic wintry shot and lauding its depiction of a quintessential East Coast experience.

“I’ve had probably six or seven people write to me in the last 24 hours to see if they can paint my picture,” Cornick said in an interview Tuesday.

“It’s definitely triggered something in people.”

Cornick snapped the photo – which has echoes of a viral 2015 shot of B.C. Mounties playing hockey in the mountains – on Sunday, but the idea for the shoot had been percolating for months.

While out on a walk with his family this past summer, Cornick came across the rock pool and the potential for an icy shoot with the Peggy’s Cove lighthouse as a backdrop immediately clicked in his mind.

He called up frequent collaborators at A for Adventure, a local company promoting outdoor activities, and began planning for the right conditions.

It all came together after a cold snap without much snow covering the strong sheet of ice — a rarity in the area, where winter weather can be unpredictable.

Cornick said it was “a bit of a scramble” to get everyone on location on time, but the photo turned out better than he imagined.

Cornick said that as with many of the photos on his Acorn Art & Photography Facebook page, he’s heard from Nova Scotians who want to share his work with far-away family members, or from people who have moved away and are missing home.

A strong public response to his work is rewarding, Cornick said, especially when it’s the result of a long-imagined artistic vision that’s finally come together.

“That’s what kind of keeps me getting up in crazy hours of the morning and trudging around in the snow in minus whatever. It keeps me going.”