“It’s all in the wrist,” said Johnnie Wicklin, mimicking a pizza toss.

For 35 years, Mr. Wicklin threw a couple of hundred pies a day at various pizza shops across the city, spending many of those years at Ray’s Pizza locations. Starting as a teenager, he worked his way up from delivering pizzas to making them, perfecting his technique.

But it’s been more than five years since he made a pie or served a slice.

Three heart attacks, one stroke and frozen shoulder in both arms forced him to give up working. He is still suffering from heart disease. At the same time, his marriage broke up and he found himself homeless.

“I lost everything,” Mr. Wicklin, 59, said in an interview last month.

In frail health, he moved from shelter to shelter, afraid of getting sick when sharing a room with up to 20 men. Those staying in shelters are normally required to leave the facilities during the day; Mr. Wicklin had to receive special passes to spend more time resting, to recover from his medical issues.

Once he got better, Mr. Wicklin said, he spent many of his days in nearby parks.

“I couldn’t travel far, because I was concerned with my well-being,” he said. “The park was always a big thing. In any area I was in, I would always look for a park. That’s the most sacred thing you can look for — you can’t sit anywhere else. Nobody wants to see you.”

In July, Mr. Wicklin finally received his own apartment through Section 8 housing on the Upper East Side. It came unfurnished, and Mr. Wicklin slept on the floor with a blanket at first.

Slowly but surely, he began to build a home for himself. He made friends with a porter in the neighborhood, who would alert him on garbage collection days if anything good was in the trash: a table, some chairs, a fan, a headboard.

Catholic Charities Archdiocese of New York, one of the eight organizations supported by The New York Times Neediest Cases Fund, used $495 from the fund to buy Mr. Wicklin a royal blue sleeper sofa. Recently, he saved enough for his own twin bed.

He has already made friends with the employees at the Ray’s Pizza down the block from his apartment, and he stops by every few weeks. But it is his daily visit to the Fort Tryon Adult Day Care that keeps him sane, he said.

A van picks Mr. Wicklin up every morning and drops him back off in the afternoon. He plays bingo, practices tai chi and goes to the movies twice a month. He also receives physical therapy. 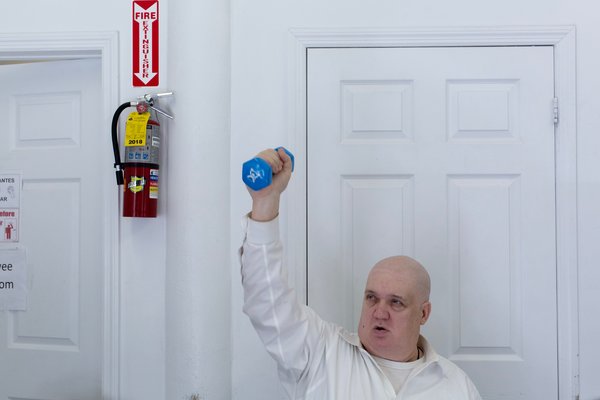 “I don’t want to take it day by day. That’s what scares me,” Mr. Wicklin said. “I know one day I’m going to drop dead. I have to worry about getting money just to bury myself, just so I could be cremated.”

He receives $837 a month in Social Security benefits, and $192 a month in food stamps.

Getting out of the shelter system “feels great,” Mr. Wicklin said, letting out a big sigh. “You get to do whatever you want, whenever you please. It took a long time to do what I want.”

He is estranged from his family, he said, and misses working. But his poor health prevents him from finding a job. “When you’re working, it’s great,” he said. “I just don’t have the power, my heart.”

The community center serves Mr. Wicklin breakfast and lunch; he brings leftovers home for dinner. In addition to watching his wallet, he also has to watch what he eats; Mr. Wicklin keeps a simple diet for his heart. “I try really hard to scrape, but I’m getting by,” he said.

He used to eat two to three slices of pizza every day. Now he steers clear of it.

“It’s really addictive,” he said. “You ever try that pizza?”