NASHVILLE — It would be easier to list the famous photographers that Billy and Jennifer Frist don’t collect.

Lining the walls of their hilltop home, once featured in Architectural Digest, are images by dozens of the greatest practitioners of the genre (Diane Arbus, William Eggleston, Berenice Abbott, Sally Mann). Name one that pops to mind; it’s here (Edward Weston, William Christenberry, Paul Strand). But so are many works by local artists who don’t have wider fame.

Even though they own more than a thousand photographs that range widely in era, subject and style, the Frists don’t emphasize numbers, in either scope or value.

“We’re not looking to impress,” said Mr. Frist, 48, an investor who was once an art history major at Princeton. “If you walk away impressed, great, but we’re not building a collection for that.”

The Frist name carries a lot of weight, both locally and nationally. Mr. Frist’s father, Thomas F. Frist Jr., co-founded HCA Healthcare as well as the Frist Art Museum in Nashville, where the younger Mr. Frist is now chairman of the board of trustees. Billy Frist’s paternal uncle, Bill Frist, is a former United States senator and majority leader from Tennessee. 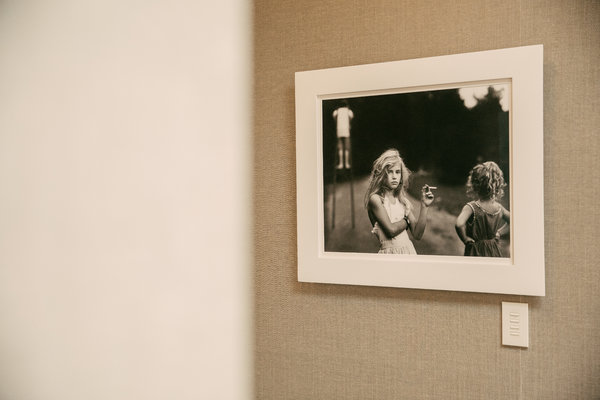 The Frists’ own mini-museum at home is loosely organized by genre. “So we have high-fashion upstairs, and we have the Southern things downstairs,” Ms. Frist said, adding that she called the former images — by the likes of Richard Avedon, Irving Penn, Sante d’Orazio, Annie Leibovitz and David LaChapelle — “Billy’s girls.”

They both call their collecting a “hobby,” but it’s a serious one. The holdings range from some 40 works by the Nashville-based photographer Jack Spencer to an 1840s daguerreotype depicting New York City that they purchased for $62,500 at Sotheby’s in 2009. The Frists even have a dedicated photography storage room, with flat files and pairs of white gloves for proper handling.

Mostly they make purchases from dealers, with occasional pickups from art fairs like Art Basel Miami Beach. But they have shown up at artists’ houses to buy work, and they recalled negotiating with a photographer to raise a price, reaching what they felt was a fairer amount.

The Frists, who have been married for 21 years and have three children, spoke about their photography over a glass of wine earlier this month. These are edited excerpts from the conversation.

How did this start?

BILLY FRIST Before we got married, I used to have nice little black-and-whites. My first purchase was a Larry Fink picture in 1993 or 1994.

How do your tastes differ?

This big image in the hallway seems like an in-your-face example — a group of people with some animals you don’t see a lot.

JENNIFER FRIST It’s by the South African photographer Pieter Hugo, one of his most famous images [“The Hyena Men of Abuja, Nigeria” (2005)]. It’s a performance troupe, that’s how they make their living.

What do your kids say about all this art?

JENNIFER FRIST About two years ago our daughter asked us to put a few pieces away for a birthday party. We respected it.

JENNIFER FRIST A couple partial nudes or suggestive photographs. But now she’s taking a photography class, so she wants to know what everything is and who did it and how. She’s having an appreciation for it as she’s gotten older.

You must get a lot of requests to see the collection.

BILLY FRIST I’m not crazy about having curators over because they’re so damn smart, and they’ve seen all this stuff. But some people who don’t know anything, they ask questions. And I always end up saying, “Damn, that’s a good question, no one’s ever asked that.” With an untrained eye, you see things.

What gets a big response?

BILLY FRIST We have Paul Fusco’s portfolio of images of people watching Robert F. Kennedy’s funeral train. People say, “This is powerful stuff.” It’s so cool to bring that out.