Short videos filled up Cardi B’s Instagram feed last week in rapid succession, choking the geometry of her page like a set of bricks. There were 10 clips of Cardi filming herself talking into her phone, each more aggrieved than the one before it. The subject: Nicki Minaj and the long-stewing tensions between them.

They were in response to a disquisition by Nicki on Queen Radio, her Beats 1 radio show, addressing the altercation between the two and their camps at a Harper’s Bazaar party during New York Fashion Week. Cardi, as is her wont, was direct, addressing Nicki with both indignation and exasperation: “Do you want to be the victim or do you want to be the gangster?”

Cardi vs. Nicki went from internet radio to Instagram, and it had echoes of another recent quarrel that unfolded in similar fashion — Drake vs. Pusha T, a long-running battle, the most recent iteration of which went from cable television to podcast.

In these two recent conflicts, you see similar friction — between a character actor and a literalist, between people who understand hip-hop as high theater and those whose celebrity is premised on something far less varnished.

In an earlier era, the tensions between hip-hop’s most prominent figures might have been confined to music, but in the social media era, the terrain of rap beef has expanded, as have the terms. And as these quarrels have moved off record, they’ve landed in formats that favor those whose success isn’t predicated on carefully built character work. Online, straight talk sells. For stars who have been carefully curating their personas for years, these are destabilizing times. 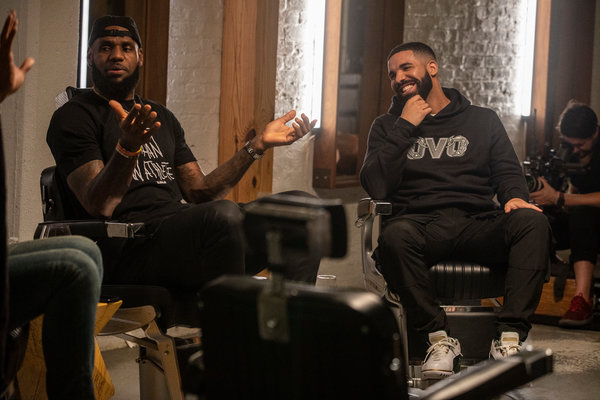 Both Drake and Nicki are performers. Before Drake was Drake, he was an actor, and he still carries himself with the polish and the ambient self-awareness that come with perpetually being observed. Nicki was a drama major at New York’s Fiorello H. LaGuardia High School of Music & Art and Performing Arts, and while acting has never been her career, she is by far the most accomplished character performer in hip-hop, a fabulist who uses voice and attitude as creative weaponry.

Though they come from extremely different traditions, Pusha and Cardi are plain-spoken literalists. Pusha made his name more than a decade ago as an ice-in-the-veins bard of drug-dealer tales. His verses — largely unchanged over the years — have sharp corners and are delivered with a you-weren’t-there sneer. Cardi emerged as an Instagram personality first, an around-the-way truthteller who triumphed over long odds on the strength of her distinctive personality. She quite literally spoke her fame into existence.

For decades, hip-hop strove to be understood as art, rather than merely autobiography to a beat (though it can certainly be that, as well). And in the last decade especially, the genre’s most effective stars have also been its most fantastical, a striking turn away from the literalism of the 1980s and 1990s.

Drake and Nicki, both protégées of Lil Wayne, have been extremely well-suited to this era. But as social media has undone these artifices, the type of artist who thrives in these ecosystems has changed, too.

Drake is a social media savant, but he is also hip-hop’s alpha figure and throneholder, and keenly aware of how he presents in all circumstances. He is a master of studied transparency, calculation masked as vulnerability.

Choosing LeBron James’s new HBO show “The Shop” to extend his ongoing feud with Pusha and Kanye West was an apt fit — it is a highly stylized and produced representation of casual banter. It scans as off the cuff but feels epic.

Drake discussed his frenemy relationship with Kanye, both working and personal, grinning slickly when describing “helping” Kanye with songwriting. He reiterated that he recorded a song full of damaging information about Kanye and Pusha but decided not to release it because it was too savage: “This is not something I ever want to be remembered for.” He also said that information about his son — which Pusha had revealed on “The Story of Adidon” before Drake had announced that he was a father — came via Kanye.

This engendered a response from Pusha, who about a week later, went on the Joe Budden Podcast, which is available on Spotify, for some air-clearing.

The footage is best watched (on YouTube) so as to fully absorb Pusha’s animus. The information about Drake’s son, Pusha said, came via someone in Drake’s camp, not from Kanye. Unlike Drake’s salvo, where you can sense that split second between the conception and delivery of a thought, this conversation feels loose, barbed, unedited. Pusha is so amped up, he often forgets to speak into the microphone at all.

At one point, he distinguishes between two sorts of integrity — that of the music business and that of the streets. “I believe everybody’s harmless,” he said of rap industry antagonists, later adding, “Everybody not built like me.” Which is to say, there are those who talk, and those who perform.

If hip-hop in the late 2000s was in a post-truth era, perhaps things are now coming full circle into a post-post-truth era. This is the age of forced transparency, of doxxing, of receipts. It’s probably not a coincidence that the subject of offering money for dirt came up in both feuds. On Queen Radio, Nicki offered $100,000 for video footage of the Harper’s Bazaar party altercation, and Pusha said that Drake, or affiliates of Drake, had been calling old friends of his offering $100,000 for damaging information.

On Queen Radio, Nicki toggled between heavy sighs and fireside chatting, a star on a pulpit pinballing between saying scandalous things and holding back on scandalous things she insists she cannot say. She’s speaking for a small audience in the studio, and for an audience of listeners, and you hear her studiously building dramatic narrative. It was a performance, with flourishes.

So when Cardi took to Instagram later that day to rebut Nicki’s claims, with the full force of video, it was impactful. She was returning to the source of her power — unvarnished talking into the phone camera, without intermediaries, telling people about themselves.

Cardi is as effective a celebrity as Nicki, maybe better, but not as good a rapper. She also uses ghostwriters, something for which she has been criticized. (Nicki is insistent that she writes her own rhymes.) But seeing Cardi back in her natural element — in her natural medium — is a reminder that she is clearly an artist of prodigious natural verbal gifts. When Cardi talks into the phone, it’s art.

Her facility with words, and with the facial expressions that amplify them, is evident. “How can I possibly use payola on some ______ that endorses you?” she asks, before collapsing back into her fur-lined seat. Talking about “No Limit,” her hit with G-Eazy (who shares management with Nicki), she says, “You barked at your management ’cause they gave me the record and that’s ________ faccccccccts,” sticking her tongue out like an impetuous child.

A couple of times, she flips the camera to show her scrolling through what is presumably her old phone, and her thumbnail is ostentatiously long — you see the tactile labor. At one point, she suggests that Nicki bring their disagreements out of the realm of the spoken and into the physical: “We could talk about it, or we could fight it out. I’m with whatever.” Which is to say, again, performance is not enough. (The videos have since been removed.)

By the final video, Cardi is just being stern: “What you need to do is stop focusing on other people, focus on yourself and focus on your craft.” Which is true: Nicki’s craft is rapping, and also performing. But the hip-hop battlefield has relocated to Cardi’s turf now, and the old rules no longer apply.