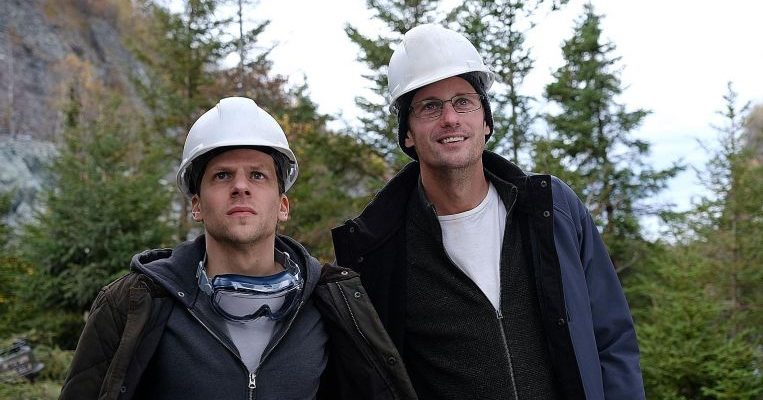 The story: Vincent (Jesse Eisenberg) specialises in stock trades, in which a tiny fraction of a second – the time taken by one beat of hummingbird’s wing – can mean the difference between winning and losing. His cousin Anton (Alexander Skarsgard) is a network savant who can increase data flow by the miniscule amounts needed to beat stock trading competitors. Both quit their jobs to become network contractors, promising clients they can lay a fibre-optic line between New Jersey and Kansas that will make investors unbeatable in trading speed.

Movies about people who win the game of American capitalism tend to be either big, splashy studies of vulgarity and emptiness (The Wolf Of Wall Street, 2013) or smaller-scale portraits of narcissism and psychopathy (The Founder, 2016; There Will Be Blood, 2007).

This movie falls into neither category, largely because the characters are still in the larval stage of the tycoon life cycle. The men – the confident Vincent (Eisenberg) and the mathematics wizard Anton (Skarsgard) – represent the typical Steve Jobs-Steve Wozniak Silicon Valley pairing of the hustler and the geek, the mouth and the brain.

The film, to its credit, does not hand-wave away the intricacies of what they do and how they plan to achieve their goal. Canadian writer-director Kim Nguyen is, in fact, intrigued by the notion of high-frequency trading and the massive efforts corporations will make – including digging through mountains and deep under nature reserves – to shave milliseconds off signal travel times between cities.

As a result, there are lots of men-at-work scenes. One sees the heavy equipment and earthworks and contacting homeowners for the legal right to bore under their property in exchange for a fee for, as one character puts it, not even noticing that anything was going on under their floors.

While interesting in a reportage sort of way, the engine of the human drama is the conflict between what Anton and Vincent promise their clients and what they can actually deliver, all the while with the ticking clock of the construction deadline looming.

Eisenberg’s Vincent is frantically spreading reassurances and half-truths to investors. Skarsgard, wearing a bald wig and a hunched, pained expression, sweats over formulas.

It soon becomes distractingly obvious that the film is having too much fun with its atypical casting. Eisenberg, who is the nerd in almost every film, plays the cocky one here and Skarsgard, who plays action heroes, is the bespectacled boffin.

They are not terrible, but that sort of jape does not help the suspension of disbelief. This movie shows why sometimes, it is better to use unknown actors – they bring attention to the story, not to themselves.