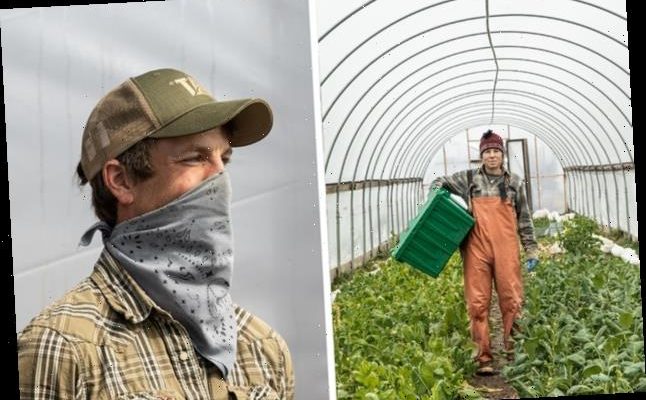 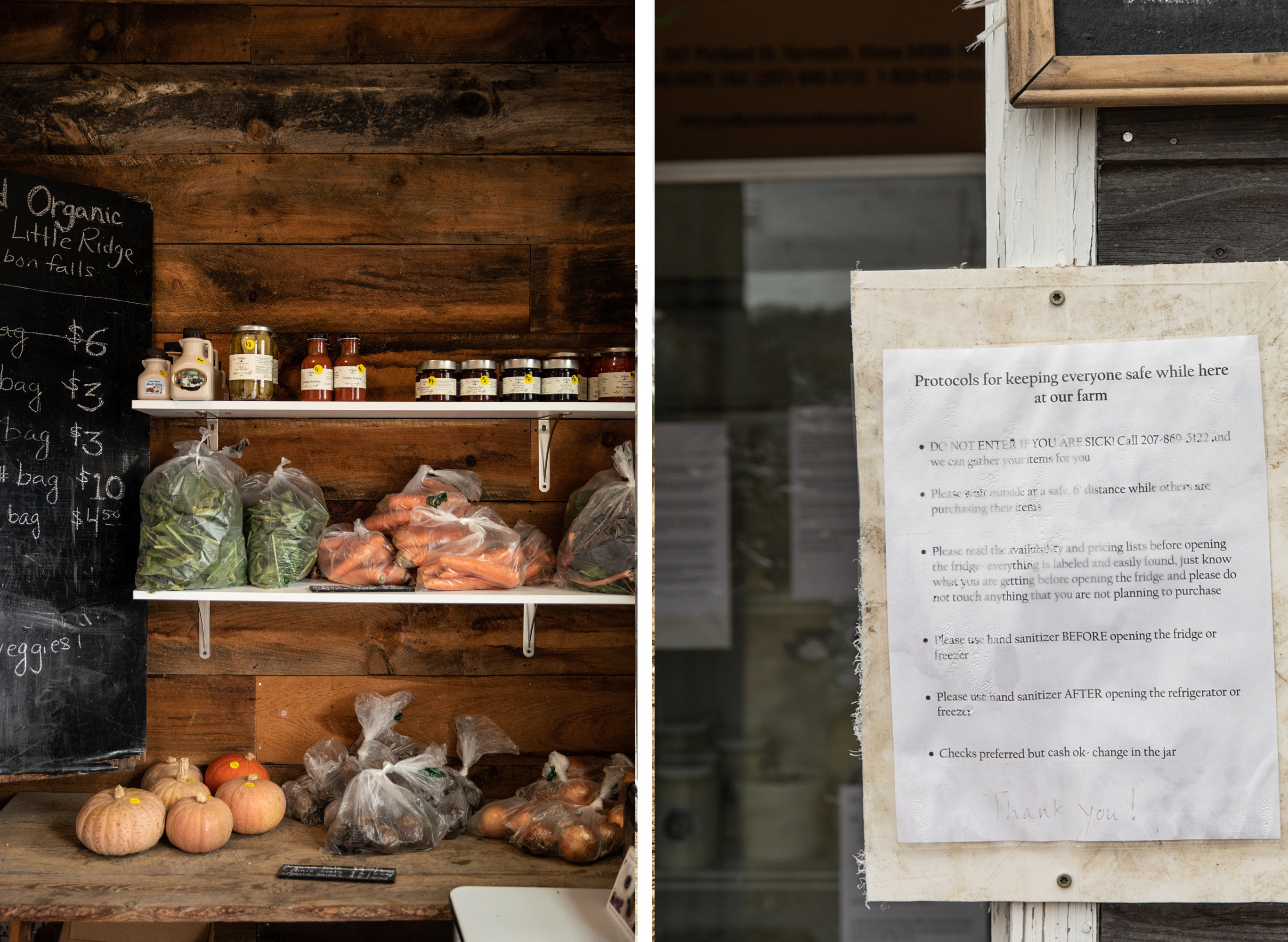 On a back road in Freeport, Maine, $35,000 worth of cheese is sitting in a dark cave. With names like Bradbury Mountain Blue, Tide Line, and Frost Gully, these cheeses are usually on the menus at high-end Portland restaurants. Steve Burger and his wife, Sarah Wiederkehr, proprietors of Winter Hill Farm, would normally be looking to sell that cheese between now and July 1. They also would be making new batches of cheese, to get through the rest of the frantic summer season. But right now they aren’t doing any of that. When will they be able to move that cheese? And when should they start making more? “I need a cheese fortune-teller,” Burger tells me. Despite these uncertainties, something hopeful is brewing in Maine. Amid almost paralyzing disruption, farmers and food producers here are rewriting the rules of the local food system, adapting, and finding new ways to feed their communities.

The day the coronavirus hit Maine, two things became immediately clear to Burger: Their restaurant business, which is most of their income stream, was dead — but people still needed food. Within a day, he and his wife set up a makeshift store on the farm. Phone calls and people started streaming in. While suddenly juggling the additional challenge of homeschooling their two children, Calla, 8, and Isaac, 10, Burger and Wiederkehr stopped making cheese and kept all of the milk from their cows raw or for yogurt. They brought in greens, eggs, and other goods from neighbors’ farms. They put some of their pork in the store freezer, some daffodil seedlings on the window sill, and haven’t looked back since. 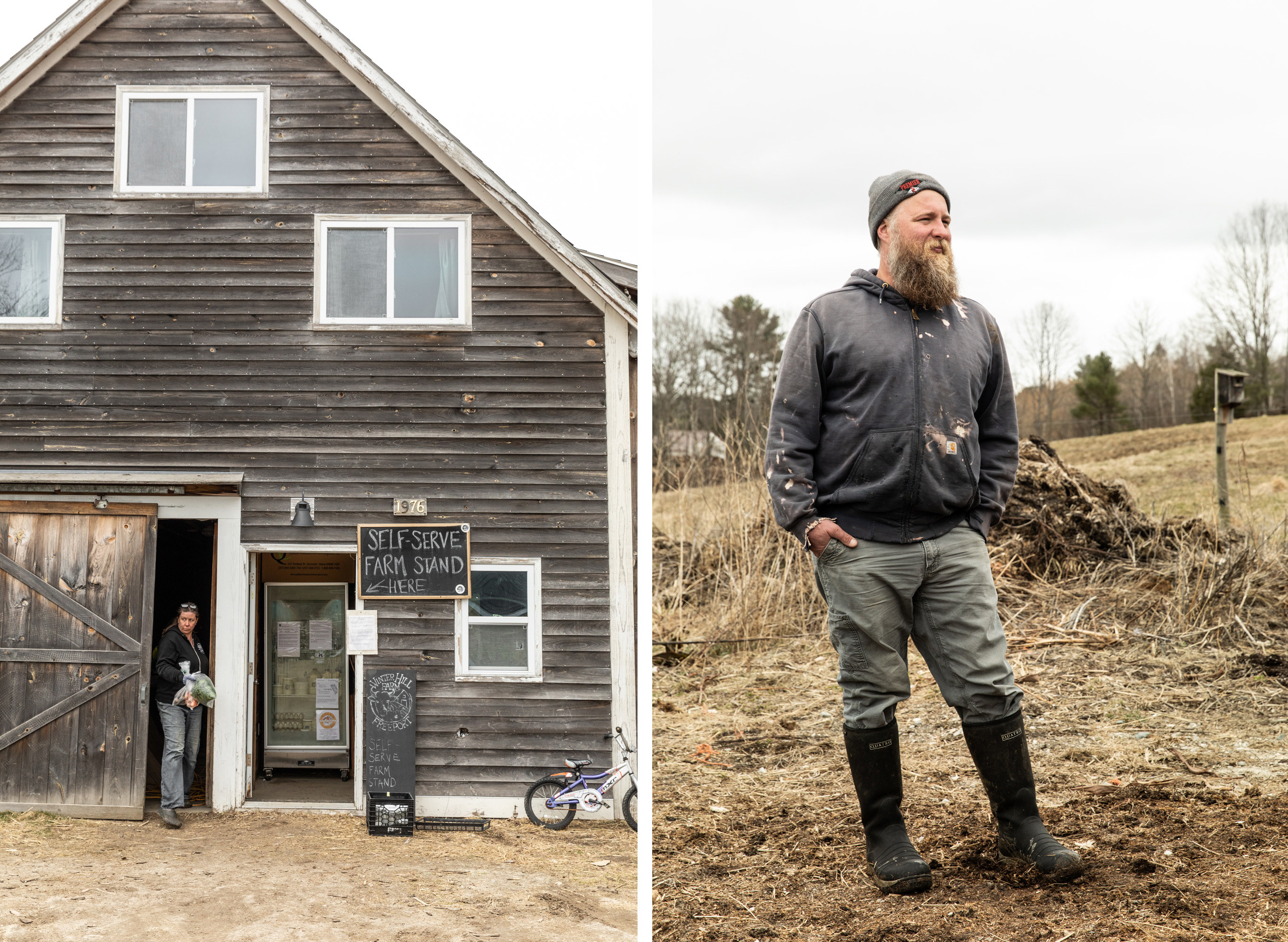 Burger says that, as farmers who intentionally grow a lot of different things, “We talk about how important it is to be diversifying what you’re doing, how it helps when something [like one particular crop] fails. This is a different sort of failure than we really expected, but it has been super beneficial to us to change direction really quickly.”

Burger and Wiederkehr worry about their business model, which has been turned upside down, but for the moment they are solvent. “People keep asking us, how is it homeschooling the kids right now? Well, the best education they’re getting is watching Mom and Dad improvise on the fly and being willing to make things work—change and evolve and say OK!”

Almost overnight, food access points in Maine have decentralized. On-farm stands and home delivery have increased exponentially. A University of Maine Extension map of farm stands and pickup sites now lists 400 options. A recent analysis by local food experts estimates a $689 million decline in local and regional markets nationwide between March and May. Maine farmers are concerned about lost sales, particularly as social distancing continues into the critical summer months. But by creating new ways to connect with consumers online and on the farm, they are, so far, weathering the crisis. 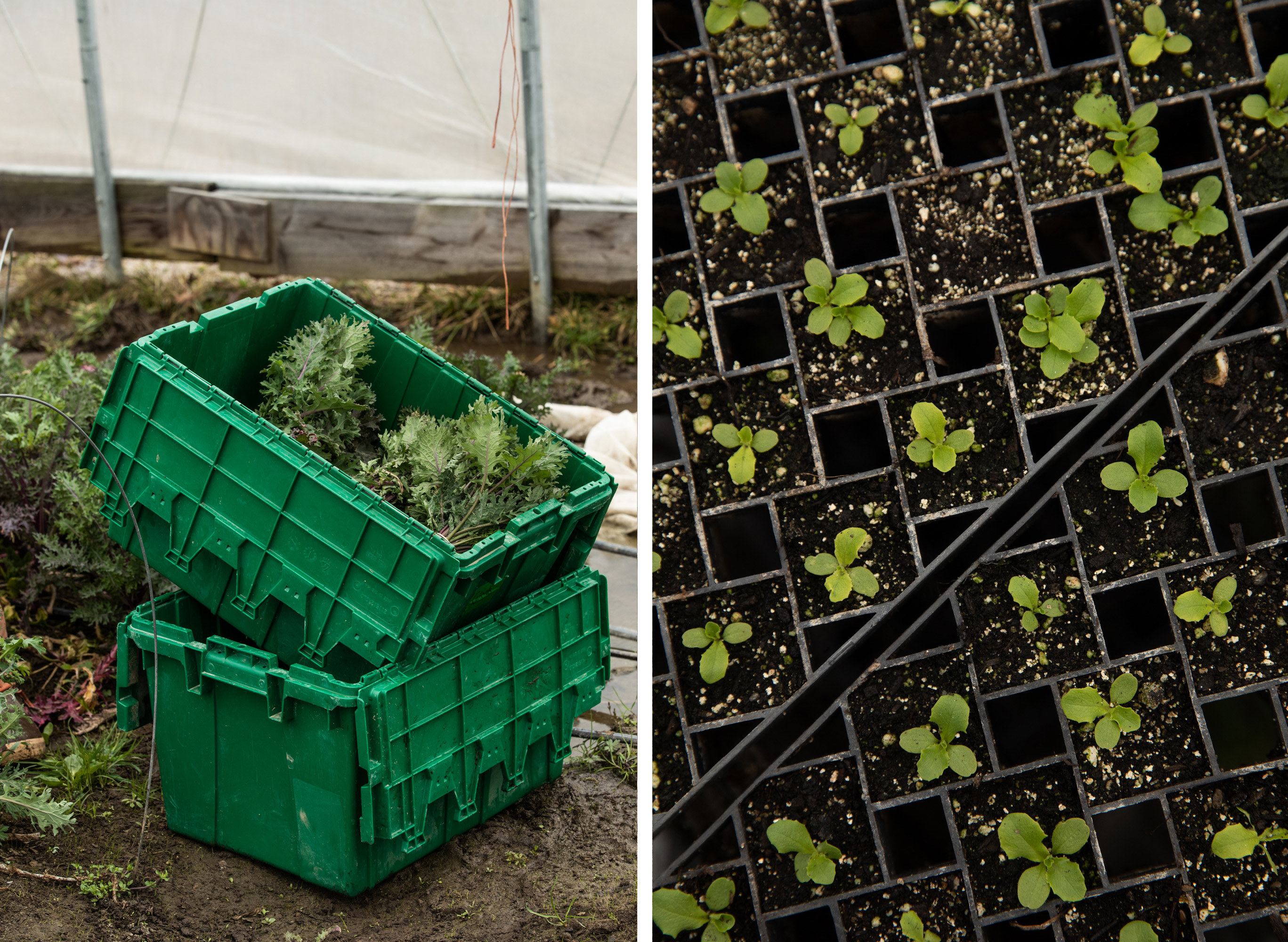 “April is the cruelest month,” wrote T.S. Eliot in “The Waste Land.” Maine is still on the edge of winter. The landscape is brown and soggy or wet with heavy snow. Buds are just barely forming on trees, and it still frosts at night. Add to that a statewide shelter-in-place order and the thick sense of fear and uncertainty that is the new normal, and spring feels like a faraway dream. Within the hoop houses of farms across the state though, spring comes early in the form of young greens.

On a typical early April day, Beth Schiller of Dandelion Spring Farm would be planting new seeds in her hoop house, repairing equipment, and maybe wondering what to do with that last batch of carrots in the refrigerator. It used to be that all of Dandelion Spring’s sales were to restaurants and at farmers markets, but as COVID-19 settled in Maine, Schiller realized something was going to have to change. She quickly made a new website with an online store and now serves her community through select pickup points or at-home delivery. Concerned about lower-income community members, who face barriers to healthy food in the best of circumstances, she increased her donations to food pantries and added a place for customers to pay for food donations to pantries. So far, she has given away $900 worth of produce.

Like so many farmers here, she has been amazed by the demand. “I think there is a recognition that when you are buying directly from a farmer that food has traveled through fewer hands,” she says. “I do see healthy food as an essential good. I recognize that farmers are producing something that is essential. Farmers are also taking care of the land, particularly the organic farm movement in Maine, in a way that is essential to having a healthy environment around us.” 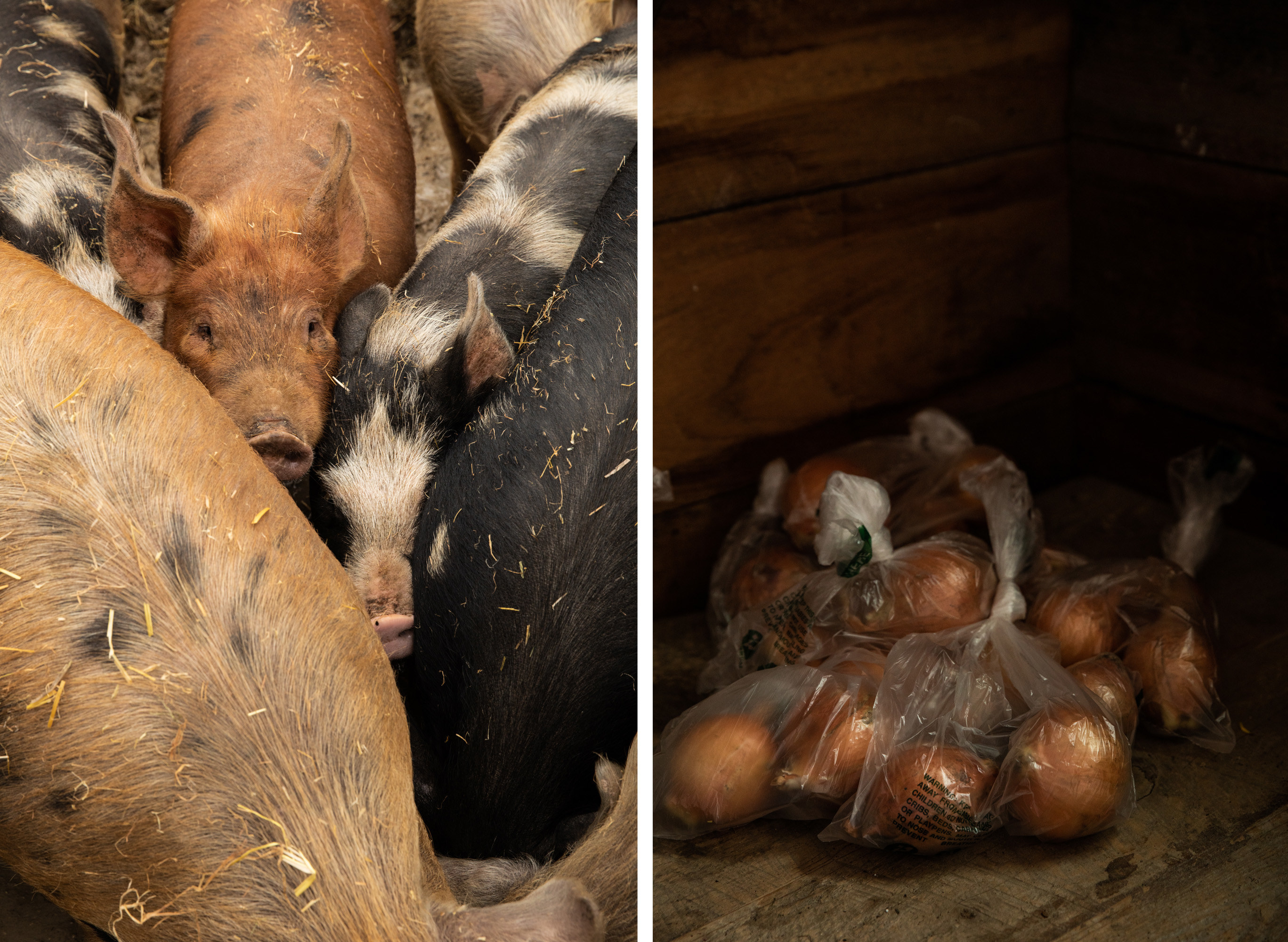 Berkshire pigs, at Winter Hill Farm, which is a diversified farm in Randall, Maine. They also raise Randall cattle and Jersey cows, seasonal produce, and flowers.

Farmers are certainly used to uncertainty, not least due to shifting weather patterns as a result of climate change. As Schiller says, “We’re built for this. We have to pivot a lot, because of weather and shifting markets and new competition. It’s new and unknown, but it’s not a totally foreign language.”

Farms are essential businesses, and farmworkers who produce our food are among those on the front lines of the pandemic. Yet most stimulus funds administered through the Small Business Administration are not applicable to small farmers. In addition to learning how to get food to customers in new ways and reinventing their business models overnight, farmers are also having to continually troubleshoot health and sanitation.

Nate Drummond of Six River Farm notes that he and his wife, Gabrielle, have been up until past midnight every night going over and over processes and contingencies: How can we better spread out people and tasks across the farm? What do we do if an employee’s spouse has symptoms?

They are currently working on organizing their farm crew into smaller groups within a group, so that certain people only come into contact with other people on a regular basis.

That way, “If someone does get sick, we’re not in a situation, like, that person has literally been in contact with everybody on the farm,” says Drummond. “What would you do — shut it all down for a week? Do you have everyone do isolated work for a week? It’s a logistical challenge.” One plus side of the crisis though, for him, has been the community. “Local farms have built these levels of connections that are really important to people and to us, too.” 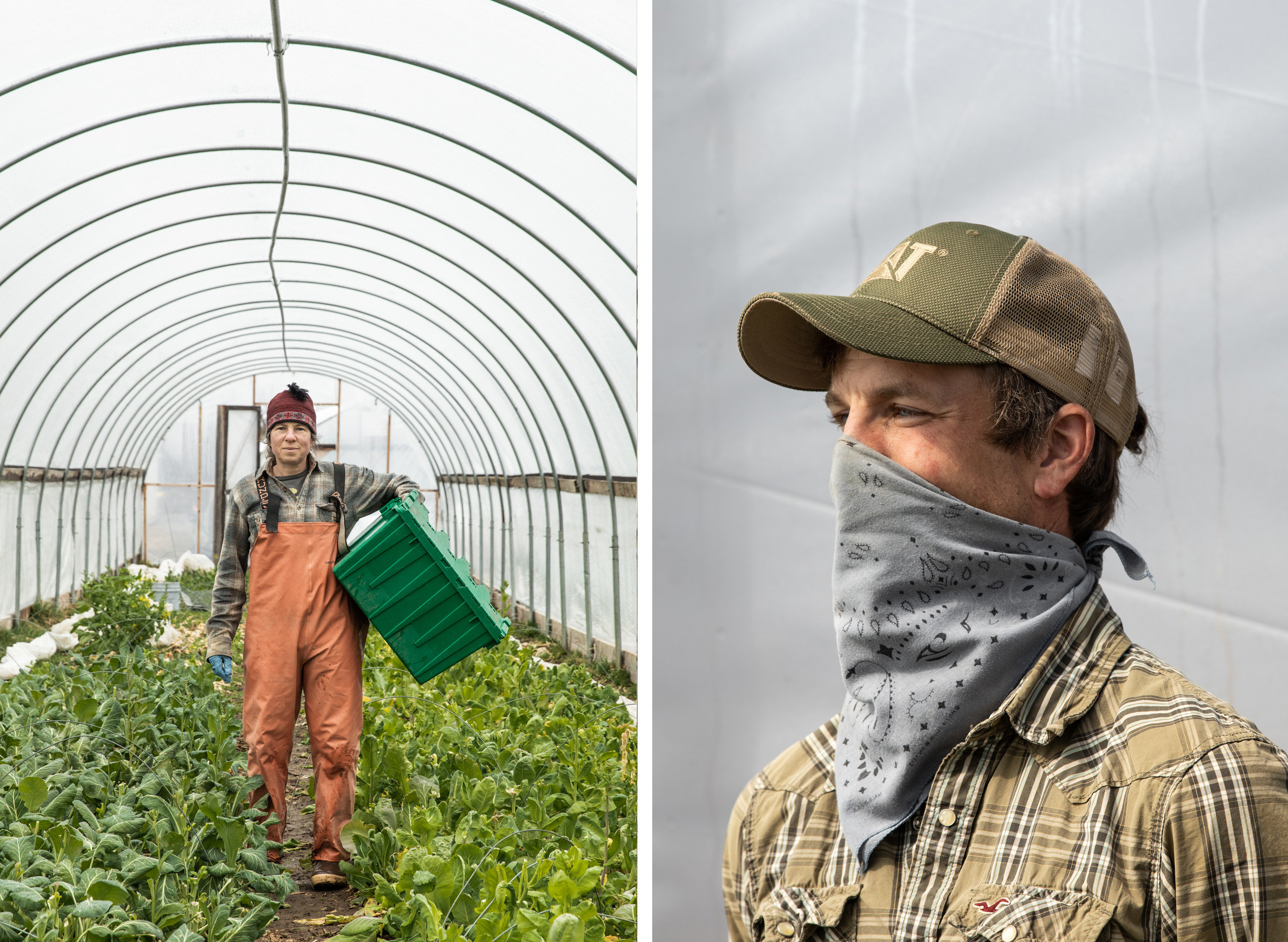 One of the key ingredients to the success of Maine’s food system is community. Bo Dennis, of the Maine Organic Farmers and Gardeners Association, believes that the reason Maine farmers are adapting so quickly is because of their social networks.

“There’s a resiliency built into the social systems of Maine farms. We want to help each other in these hard times. We want to provide information to each other and to support the local food system. People are well-connected with each other, and there’s a camaraderie and spirit that comes with that.”

Maine farms are tightly networked, connected with each other and their broader communities through social ties. They are also small and highly diverse. These features — small- and medium-size farms, growing a diverse array of crops — are critical to Maine’s food system. But it is the community ties that are revealed in a crisis.

Dennis explains, “We’ve seen throughout the state, groups of farmers coming together to figure out how to support their community. That social connection leads to fast adaptability and resiliency, which arguably is more sustainable as we go into these unknown times.”

“Maine’s people are rallying around its farmers and producers because they understand not only how important our local farmers are, but how critical it is to support their businesses,” says Amanda Beal, Maine’s commissioner of agriculture, conservation, and forestry.

As COVID-19 reveals the risks of relying on global supply chains, perhaps this is an opportunity to look anew at local food systems. “In Maine, we have been working deliberately for decades to build a vibrant local food system,” Beal says, “and that work benefits us now, as our farmers are playing an important role in making sure that people can access the food they need in a time of crisis.” 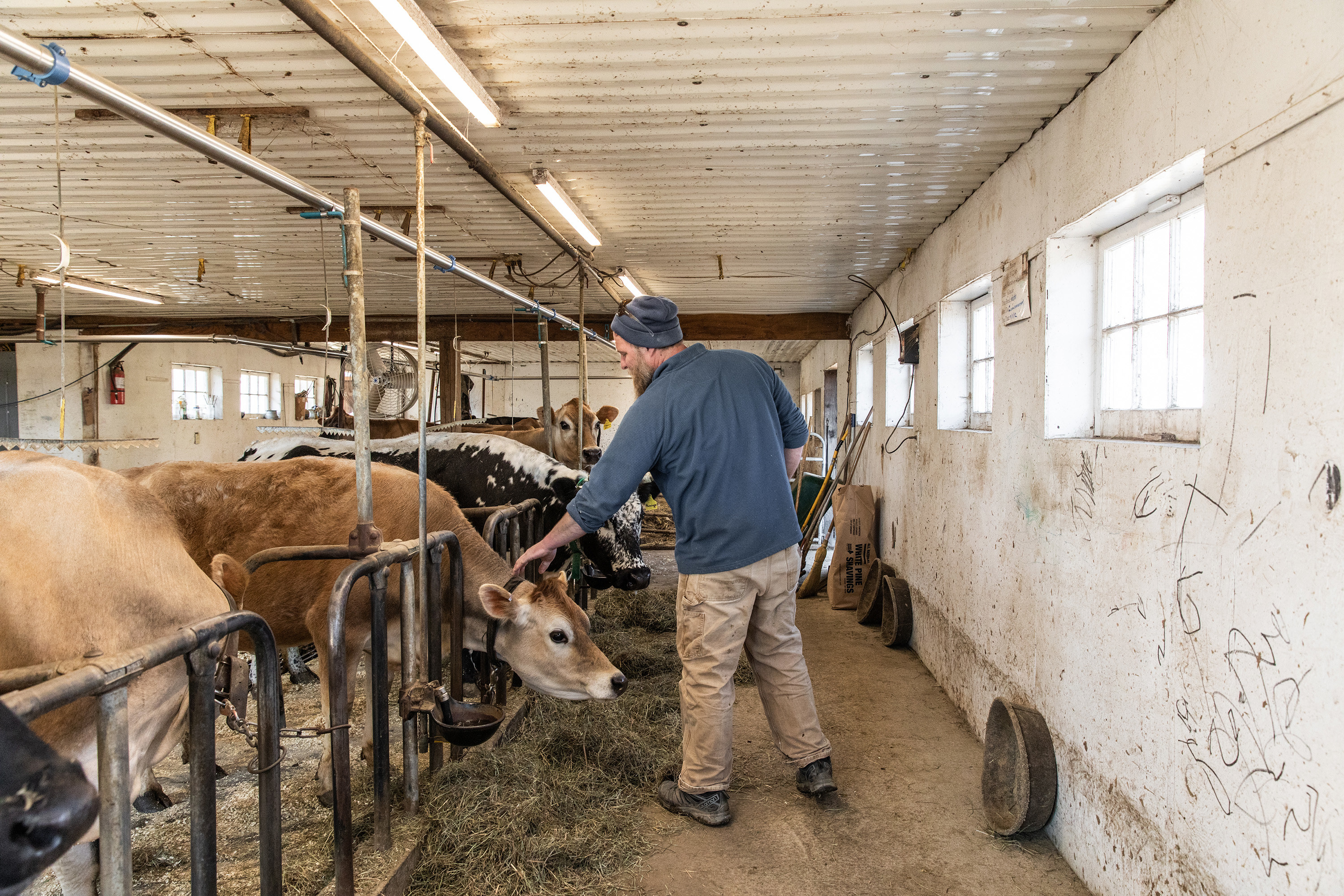 Steve Burger tends to his cows at Winter Hill Farm outside Freeport, Maine. 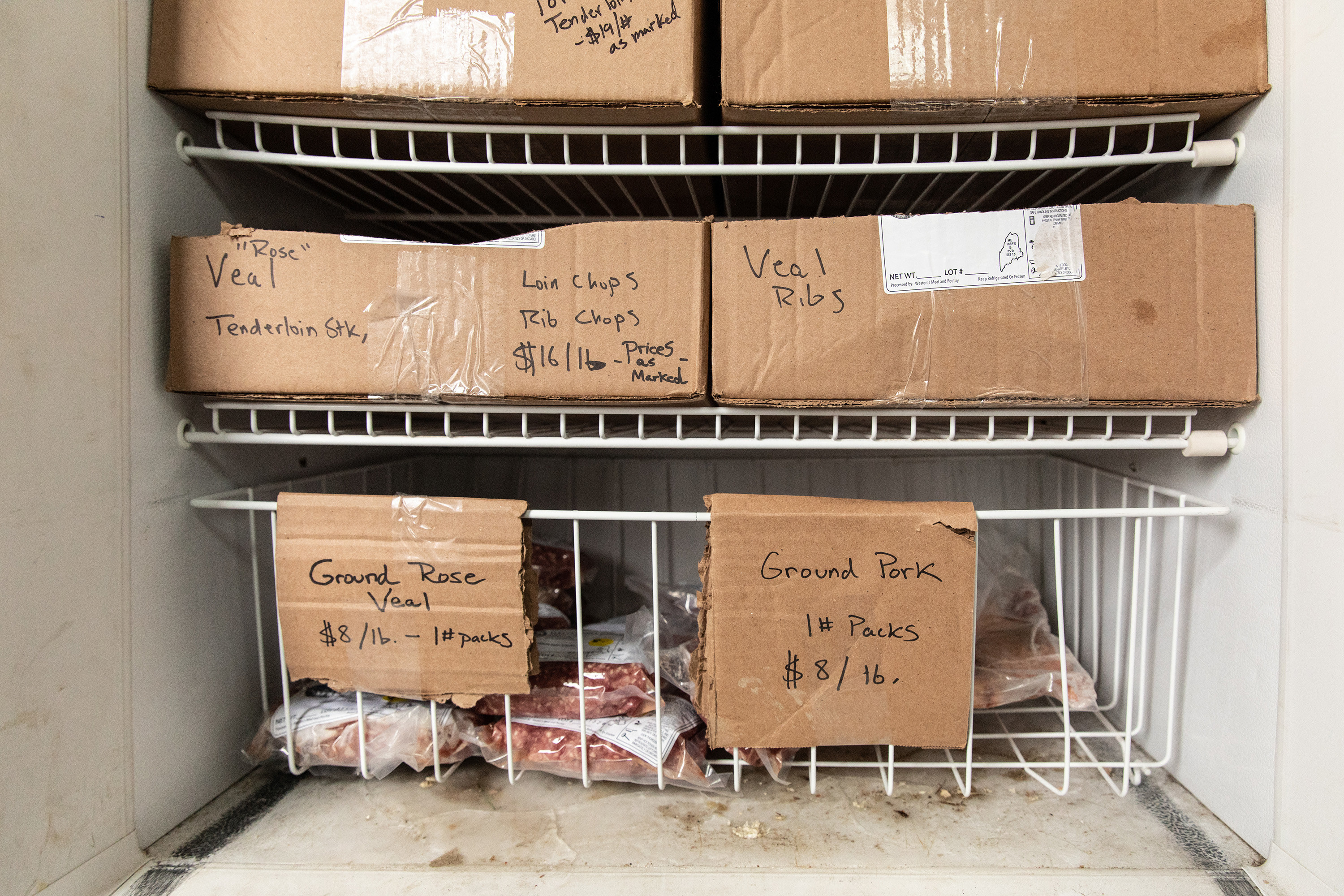 The farmstand at Winter Hill Farm pivoted to provide food direct to consumers, opening with their milk, cheese, yogurt, meats, winter vegetables from a nearby farm, and other provisions.

Despite long and harsh winters, Maine farmers can provide local food year-round by growing hardy greens in hoop houses or greenhouses and by keeping root vegetables like parsnips, carrots, turnips, and beets in cold storage. 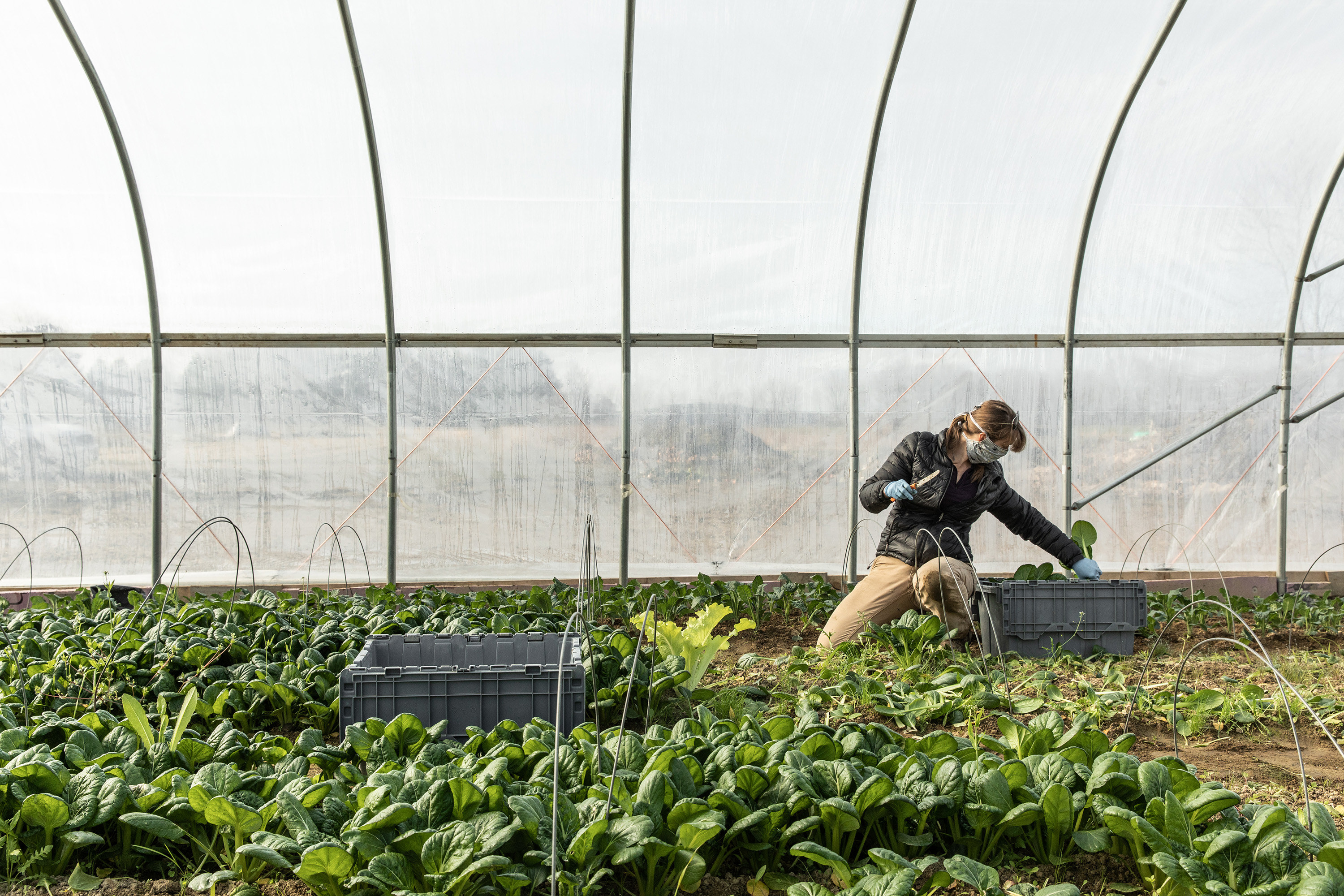 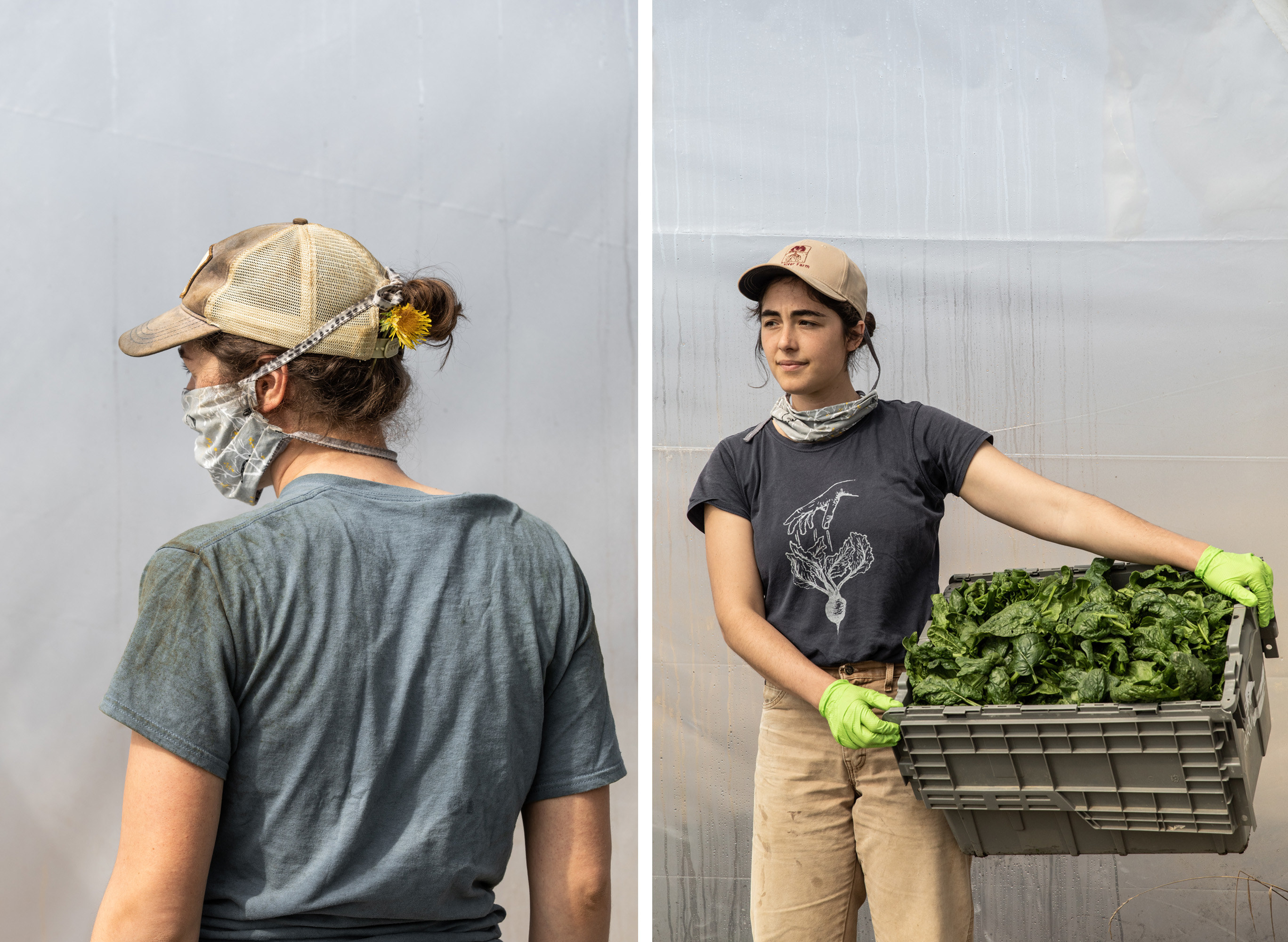 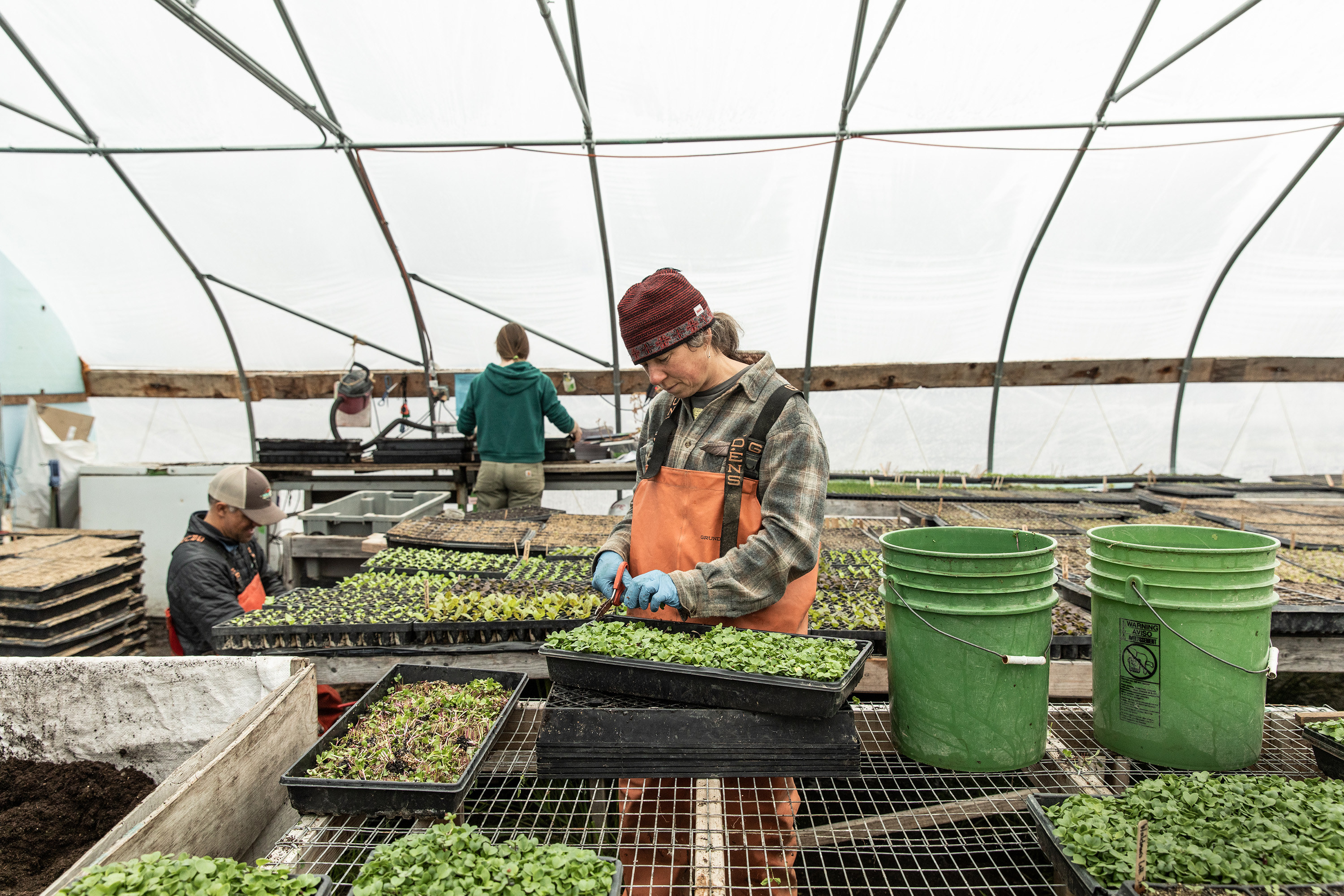 Beth Schiller harvests microgreens in one of the greenhouses at Dandelion Spring Farm in Bowdoinham, Maine. 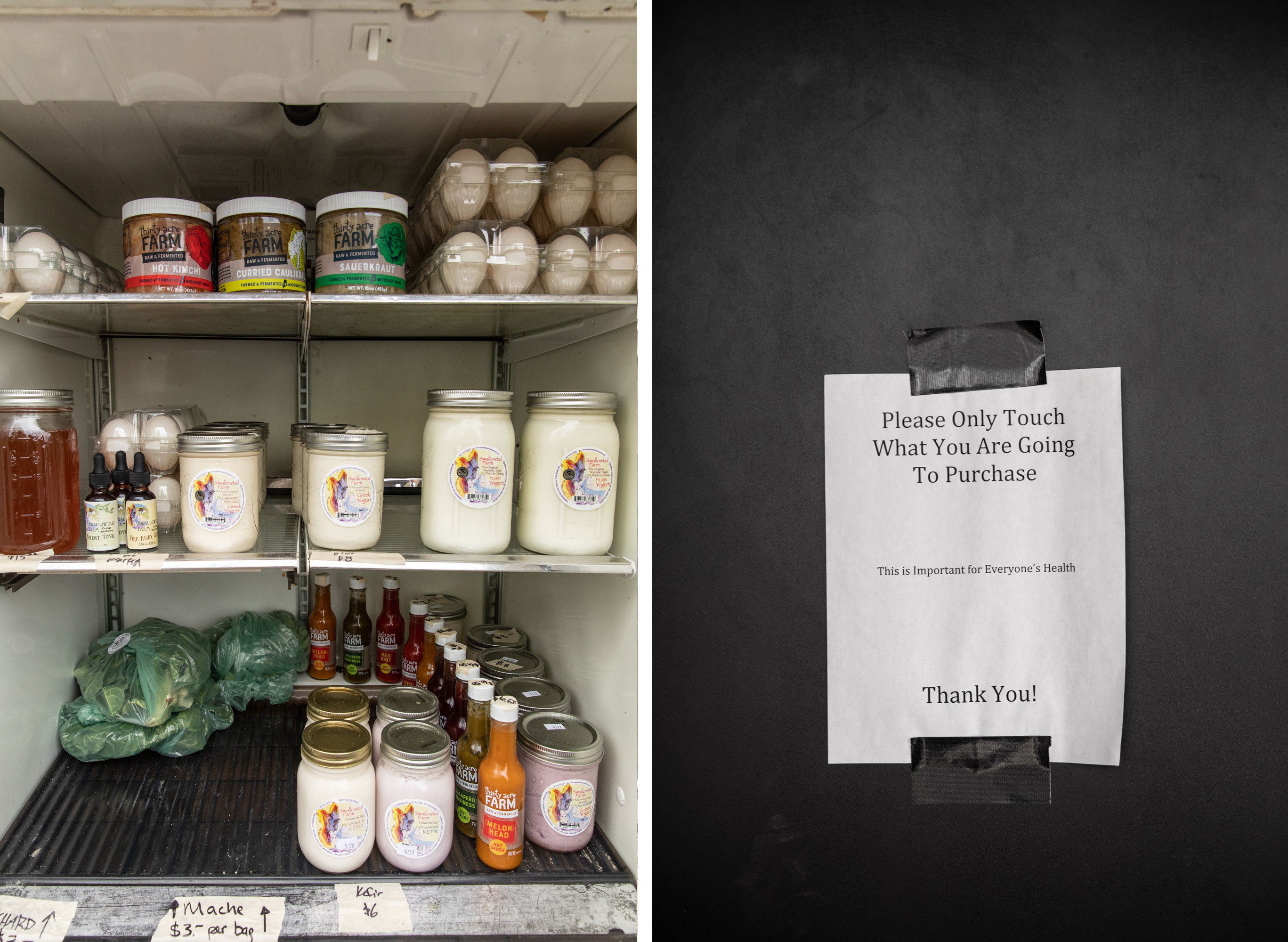 Many rural Mainers get their food from local farmstands, where payment is honor-based. Stonecipher Farm has a roadside stand with produce from its farm and goods from other local farms. Six River Farm in Bowdoinham, Maine has adopted new methods for providing produce direct to consumers, while instating new safety policies. 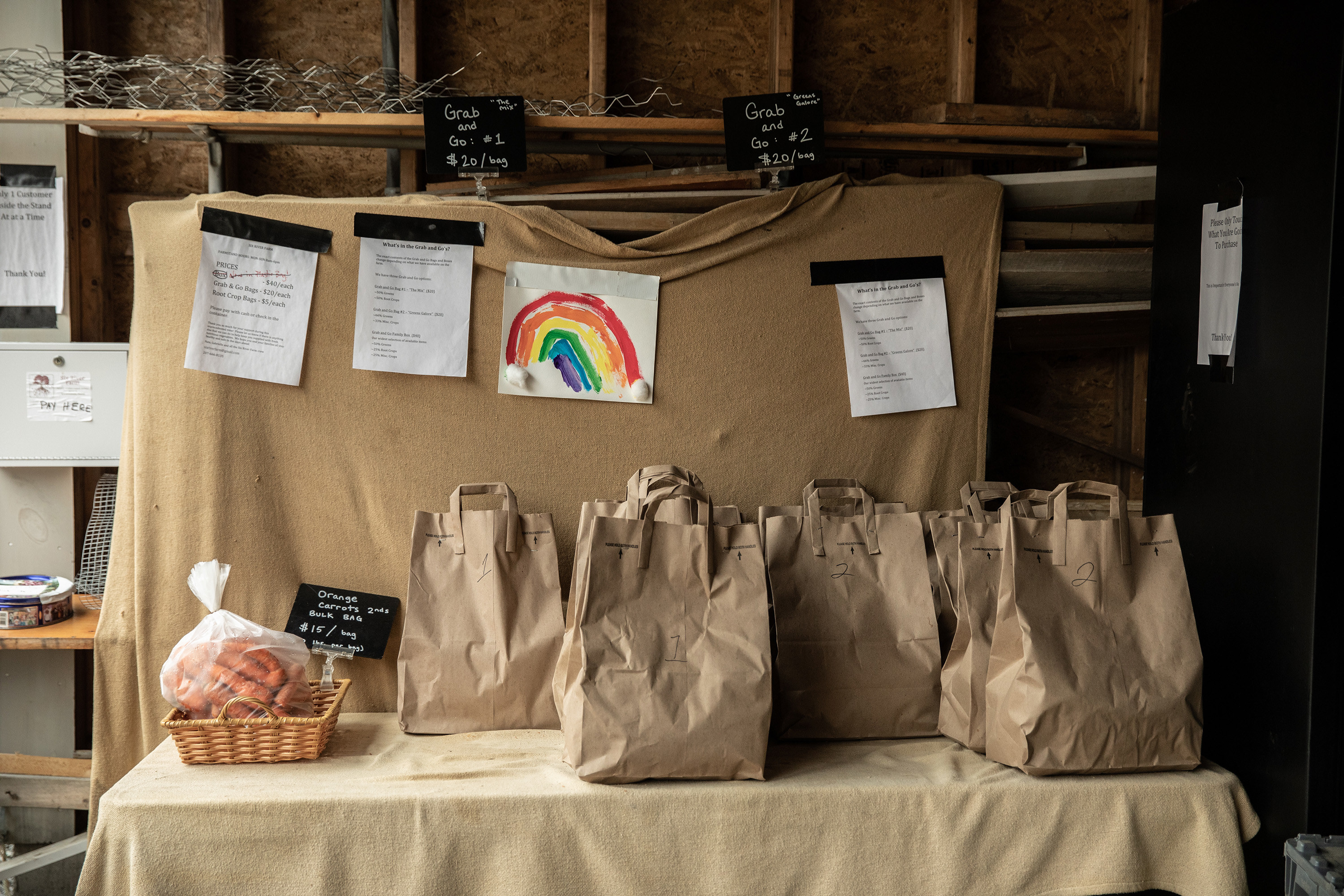 The farm stand at Six River Farm in Bowdoinham, Maine has “grab and go” bags, which allows people to touch as few surfaces as possible while picking up food. 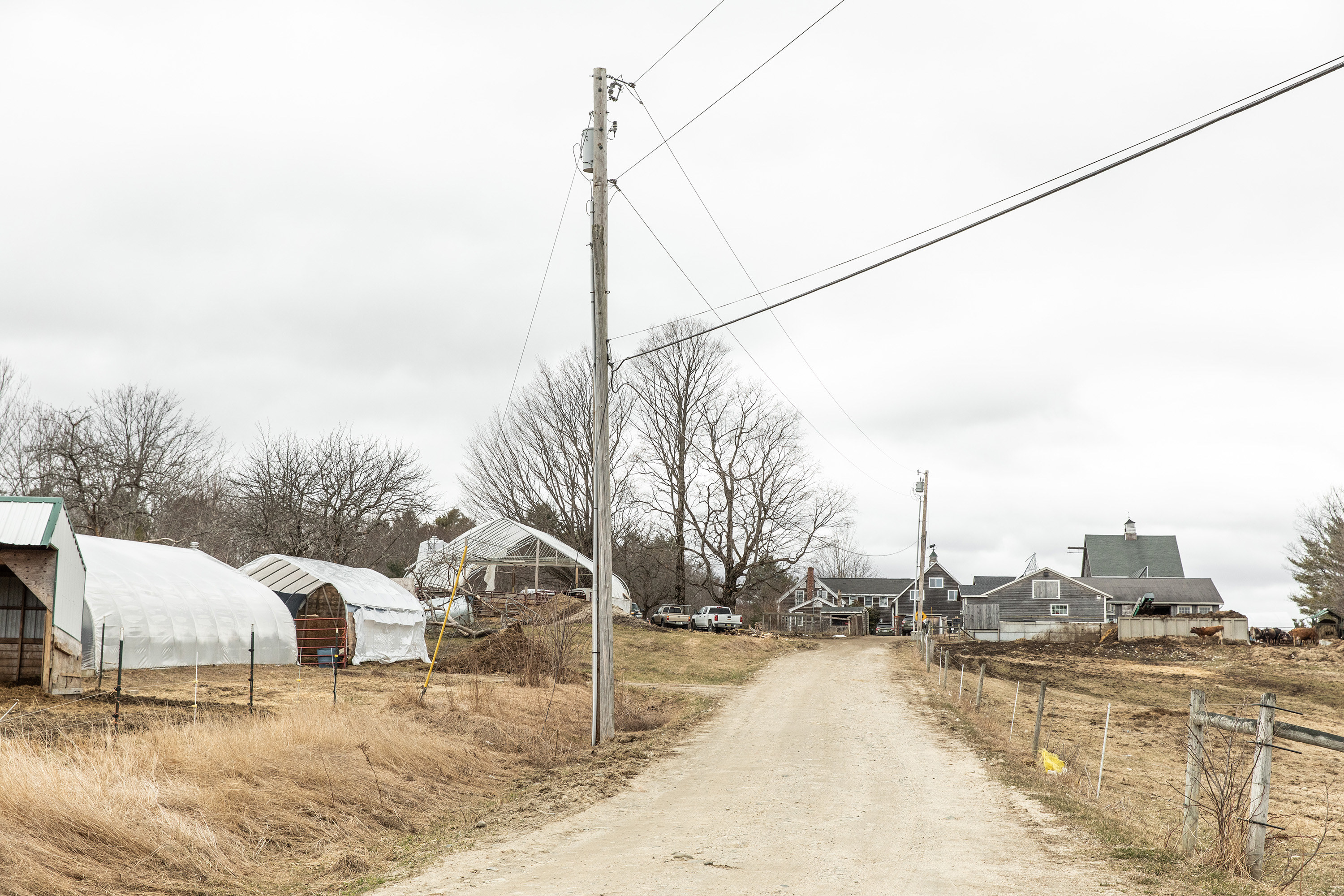 Winter Hill Farm outside Freeport, Maine. Maine farmers adapt to long winters; in Maine, spring likely doesn’t begin until May or even June, with snowstorms and frosts lasting into April.

Erika Soule picks up a bag of farm goods at Merry Meeting Kitchen in Brunswick, Maine. Merry Meeting Kitchen organized quickly to connect people with local foods by creating on-site pickups with goods from several different local farms and businesses. Alexandra May, a volunteer, delivers a box of goods from Dandelion Spring Farm to a home in Portland, Maine. Some farms have worked to find ways to offer delivery to those who don’t feel comfortable leaving their homes.

Greta Rybus is a photojournalist based in Maine who specializes in documentary work. Kate Olson is a writer focusing on agriculture and climate change.