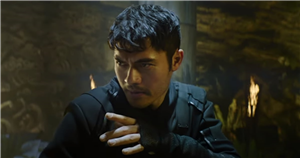 Henry Golding is gracing our screens once again, only this time, instead of making us swoon as Nick Young on Crazy Rich Asians, he’ll be playing the badass Snake Eyes in the upcoming G.I. Joe spinoff, fittingly titled Snake Eyes: G.I. Joe Origins. On Sunday, we got a first look at the trailer during the 2021 MTV Movie and TV Awards, and Golding looks ready for action.

The film, which is set to premiere on July 23 and was filmed in Japan, will focus on the mysterious beginnings of Snake Eyes and sees the character without his famous helmet. “I wanted to see something different, and I wanted it to look different, to feel different,” Golding told Entertainment Weekly. “To be able to launch a franchise like that, it was just too good to be true — and especially with a character like Snake Eyes about whom a lot of people don’t know too much. They know him as this insane operator that completes missions and is an absolute weapon, but who’s the guy behind the mask and what’s his story?” Directed by Robert Schwentke, Golding will star alongside Samara Weaving and Andrew Koji. Brace yourself, and watch the trailer above.