Alphonse Catanese’s father ran a construction company. Every year, he would pack turkeys in ice in the back of a dump truck, then drive to job sites and supply yards in Brooklyn and Queens to provide employees and friends with their Thanksgiving bird.

When Mr. Catanese retired from his own career in construction a few years ago, he wanted to continue his father’s charitable efforts. So he and his wife, Maria, decided to revive the tradition of distributing turkeys as a way to honor their parents — though they don’t use a dump truck.

“It’s a way of having them at the table with us,” Ms. Catanese said last week.

With nine days to go before Thanksgiving, rain pelted the hoods, hats and heads of volunteers unloading boxes of turkeys donated by the Cantaneses from a truck outside Resurrection-Ascension Catholic Church in Rego Park, Queens. The volunteers gave away more than 300 birds, and 400 more were handed out on Friday at St. Jerome’s Roman Catholic Church in East Flatbush, Brooklyn.

That brings the number of turkeys that Mr. and Mrs. Catanese have donated since 2016 to 1,400.

“It’s important to help someone else and make someone feel special on a day that’s very important,” Mr. Catanese said. “You get a lot of gratification out of it.”

The giveaways were organized by Catholic Charities Brooklyn and Queens, one of eight organizations supported by The New York Times Neediest Cases Fund. Throughout the month, those agencies have hosted many events to help people celebrate Thanksgiving.

They range from smaller gatherings, like Brooklyn Community Service’s annual Latin and soul food Thanksgiving lunch at a high school it helps operate, to large food donation efforts by the Catholic Charities Archdiocese of New York, which this month is giving away 1,500 turkeys and all the trimmings.

“The idea of today is about serving and respecting our sisters and brothers, no matter who they are,” said the Rev. Patrick J. Keating, who started last week’s turkey drive in Queens with a blessing. “What they believe is not important. They’re people in need, and we should be caring.”

For some families in the region, these donations make a Thanksgiving meal possible.

Olga Hernandez, an Astoria resident with three children under 6, said she was planning a Thanksgiving dinner for nine, including her in-laws, using food she picked up from the Catholic church in Queens last week.

Ms. Hernandez said she was grateful to have a hot cooked meal and family. “Some people don’t have either.” 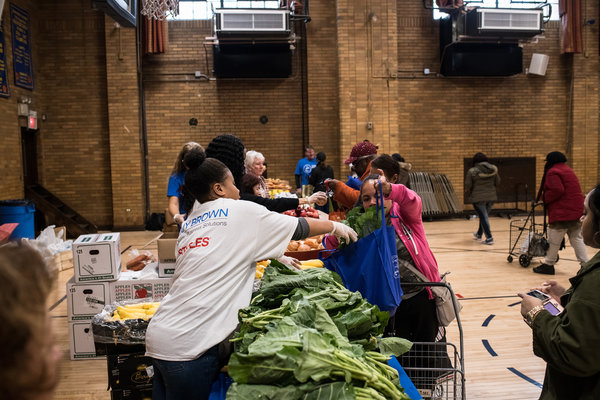 Mrs. Hernandez picked out the ingredients for her holiday meal from the gymnasium in the church basement, where almost a dozen tables were assembled, topped with a medley of Thanksgiving fixings and fresh produce from which attendees could choose.

“It’s more dignified for people than just bagging something for them and handing it to them,” said Debbie Hampson, the director of community programming services at Catholic Charities Brooklyn and Queens.

Some of the recipients arrived at the church hours before the 10:30 a.m. start time. The giveaway proved so popular in past years that people now need to make appointments, with arrival times staggered over a few hours to manage the crowd.

After selecting their trimmings, the last item guests got on their way out of the church was the turkey. The Cataneses handed them out personally.

“The people that are coming really genuinely appreciate the turkey and genuinely need it,” Mr. Catanese said. “You know that bird’s going to be cooked, and it’s going to be on someone’s table. It’s going to make the holiday more special.”

Even when he is preparing Thanksgiving dinner for 1,500 people, which means 2,700 pounds of turkey, 2,000 pieces of bread and 200 pounds of yams, just for starters, Victor Huezo does not let flavor suffer for the masses.

“That’s where I take pride — it has to be exactly what I would make at home,” said Mr. Huezo, who is the executive sous chef at the Sheraton New York Times Square. “We don’t take shortcuts.”

For the past 28 years, the Sheraton has prepared a Thanksgiving meal for the Dunlevy Milbank Center, a Harlem community center run by Children’s Aid, which benefits from The Neediest Cases Fund. The event is held the evening before Thanksgiving.

In addition to 150 roast turkeys, half of which will be wrapped up and raffled away, Mr. Huezo and his kitchen cooked 15 hams and all the fixings, including mashed potatoes, macaroni and cheese, stuffing and a dessert buffet. The Food and Beverage Association solicited donations from hotels across the city to be prepared at the Sheraton.

Mr. Huezo, who led Thanksgiving preparations for a fifth year, begins prepping five days before the event, dicing up vegetables to roast with the turkeys. The birds went in rotating ovens first thing Monday morning, and by noon, a row of beautifully browned turkeys filled the kitchen.

Everyone from managers to housekeepers pitched in, sharing tasks from cooking to decorating the tables at the Milbank Center. “We make it a beautiful experience,” Mr. Huezo said.

Casper Lassiter began going to Thanksgiving at the Milbank Center as a teenager; now he is the center’s site director. This is his 28th year attending the event.

“I had no idea coming in what all went into it,” he said. “We all looked forward, because the food was great, the atmosphere was great. It was really something all us teenagers looked forward to when we were growing up.”

Generations of Harlem families attend. Mr. Lassiter said people who were once teenagers at the center return over the years with families of their own.

“What touches me the most is the alumni that come back,” he said. “It’s a great feeling to say they’re off at college and coming back to the community. It provides the best feelings for every Thanksgiving.”

For most of his life, Brandyn McCall didn’t look forward to Thanksgiving.

He had been in the foster care system since he was 4, spending time in several homes and facilities, lacking stability.

But last week, Mr. McCall, who is now 19, led a prayer before about 100 residents, staff, volunteers and alumni who celebrated Thanksgiving at the Rita J. and Stanley H. Kaplan House, a residential treatment program for young men who predominantly come from the foster care system.

The house is a program of the Jewish Board of Family and Children’s Services, a beneficiary agency of UJA-Federation of New York.

“It’s very fun here, it’s a good experience,” Mr. McCall said. “You have your ups and downs. You might not get along with every staff or every resident, but that’s how life is.”

Residents like Mr. McCall helped prepare the meal, including turkey, ham, fried fish, pernil, yellow rice and more, and decorate the gymnasium. A “Give Thanks” sign hung under the basketball backboard.

Before he recited the prayer, Mr. McCall listened to Ariana Grande to keep his nerves at bay. Music has kept him company throughout the years, and he can often be heard humming around the house. “It’s been my biggest support system in my life,” he said.

Another resident, D’Amonte Brown, 19, helped in the kitchen for two hours, grating cheese and getting the sweet potatoes in order. He loves to cook (his secret ingredient is nutmeg).

Mr. Brown, who has been in the foster care system since he was 16, said that this Thanksgiving, he was most grateful for the Kaplan House community around him as he rebuilds his relationship with his mother.

“I don’t think we would have had so much progress in our relationship and how it’s developed if I wasn’t in a support system like this,” he said.