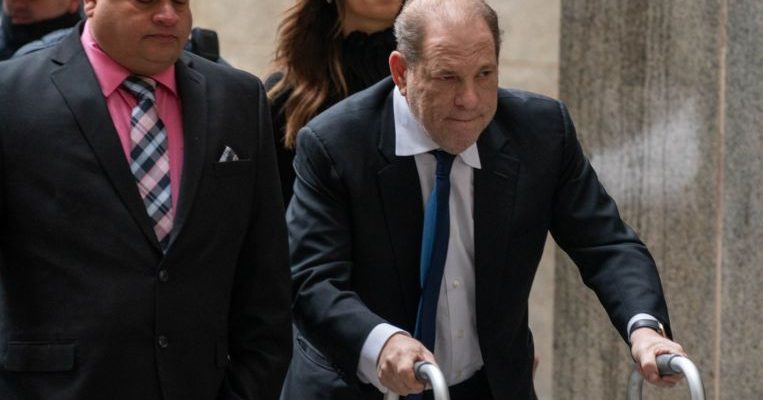 LOS ANGELES (NYTIMES) – After two years of legal wrangling, Harvey Weinstein and the board of his bankrupt film studio have reached a tentative US$25 million (S$34 million) settlement agreement with dozens of his alleged sexual misconduct victims, a deal that would not require the Hollywood producer to admit wrongdoing or pay anything to his accusers himself, according to lawyers involved in the negotiations.

The proposed global legal settlement has gotten preliminary approval from all the major parties involved, according to several of the lawyers.

More than 30 actresses and former Weinstein employees, who in lawsuits have accused Weinstein of offenses ranging from sexual harassment to rape, would share in the payout – along with potential claimants who could join in coming months.

The deal would bring to an end nearly every such lawsuit against him and his former company.

The settlement would require court approval and a final signoff by all parties. It would be paid by insurance companies representing the producer’s former studio, the Weinstein Company.

Because the business is in bankruptcy proceedings, the women have had to make their claims along with its creditors. The payout to the accusers would be part of an overall US$47 million settlement intended to close out the company’s obligations, according to a half-dozen lawyers, some of whom spoke about the proposed terms on the condition of anonymity.

Representatives for Weinstein declined to comment. Lawyers did not respond to requests for comment for board members and other parties.

Weinstein is scheduled to be tried in New York in early January on charges of sexual assault involving two women. While his criminal prosecution has drawn public attention, the largely hidden negotiations over civil claims have been far more consequential for many of his accusers, who include women from the United States, Canada, Britain and Ireland.

More than US$12 million – a quarter of the overall settlement package – would go towards some, but not all, legal costs for Weinstein; his brother, Bob; and other former members of their company’s board, the lawyers said. The board members would be insulated from future liability, and the alleged victims would drop their claims against Weinstein and other executives.

Several plaintiffs’ lawyers said Weinstein, who would avoid making a personal payout, had claimed that he might soon file for personal bankruptcy.

Katherine Kendall, 50, an actress who accused Weinstein of luring her to what she thought would be a work discussion in 1993 and then chasing her around his New York apartment while he was nude, said she was disappointed by the terms but had agreed to them partly because she didn’t want to block fellow plaintiffs from getting whatever recompense they could.

Genie Harrison, a sexual harassment lawyer representing Sandeep Rehal, a former Weinstein assistant who is part of the proposed settlement, said that holding out for more favourable terms might have left the alleged victims empty-handed.

A combination of preliminary legal rulings against various plaintiffs, laws that protect boards against liability, and previous failed settlement efforts had put the women in a weaker bargaining position.

“I don’t think there’s a markedly better deal to be made,” Harrison said. “We have really, truly done the best we can under the circumstances, and it’s important for other victims to know this, come forward and be able to get the best level of compensation we were able to get.”

The settlement would resolve lawsuits filed by dozens of women since 2017, when The New York Times exposed allegations of sexual harassment and abuse by Weinstein.

Although the producer’s accusers include some of the highest-profile women in the entertainment world, such as Gwyneth Paltrow, Angelina Jolie and Salma Hayek, none have joined the proceedings. A lawsuit by actress Ashley Judd, who has said she intends to take Weinstein to trial, would not be part of the deal.

The process has been long and complicated, involving lawyers for the women, Weinstein, his former board members, creditors, insurers and the New York attorney general’s office.

Last year, when the Weinstein Company entered bankruptcy, the accusers watched a potential settlement payout dwindle from a projected US$90 million victims’ fund that had been discussed as part of a possible sale of the studio.

Then Eric T. Schneiderman, who as state attorney-general had sued the studio and the Weinstein brothers and was steering settlement talks, resigned amid allegations that he had abused women.

Even if the proposed deal goes through, its terms would come with uncertainty. Eighteen of the alleged victims would split US$6.2 million, with no individual getting more than US$500,000. A separate pot of money, US$18.5 million, would be set aside for those who were part of a class-action case, the New York attorney general’s suit and any future claimants, with a court-appointed monitor allocating payments based on the severity of the harm alleged.

Two women who have brought civil suits against Weinstein – Alexandra Canosa, a producer who used to work for him, and Wedil David, an actress – have walked away from the tentative deal and intend to challenge it, according to their lawyers.

Douglas Wigdor, who represents David, said such an agreement would box the women in by setting aside US$1 million to help Weinstein resolve their cases, and precluding them from pursuing board members or the insurance companies.

“What’s most offensive is that they’re trying to force our client to settle,” Wigdor said.

Now that most of the participants have agreed to go forward, the lawyers can work to turn the preliminary term sheet into an official settlement agreement – a longer, more detailed document that will require approval from at least two judges, one from the federal court in Delaware overseeing the Weinstein Company’s bankruptcy and the other from a federal court in New York.

But it could still fall apart because of objections by lawyers representing the dissenting women.

The narrow scope of Weinstein’s upcoming criminal trial only heightens the significance of the civil settlement, likely to be the only legal recourse for many of the women who said he abused them.

Because some alleged victims have declined to participate in a criminal trial, or have complained of offences that are not criminal or fall outside the statute of limitations, the court case in New York centres on just two people.

One woman accused Weinstein of raping her at a Manhattan hotel in 2013, and the other claimed he forced oral sex on her at his townhouse in 2006. Weinstein has denied any nonconsensual sexual activity.

He also sought to have insurance companies cover the cost of his criminal defence if he were acquitted. They refused.

Zoe Brock, 45, a former model who has accused Weinstein of sexually inappropriate behaviour, said in an interview that agreeing to the settlement terms made her feel “sick and defeated and hopeless,” because neither Weinstein nor his former board members would be required to pay the alleged victims.

But when she looked for legal alternatives, she found none.

Other plaintiffs said they were trying to find value in the tentative agreement.

“Many of us are outside the statute of limitations, and we can’t have our day in criminal court with Harvey,” said Caitlin Dulany, 56, who has accused Weinstein of sexually harassing and assaulting her in the mid-1990s.

Even a flawed settlement, she said, might “bring some justice and relief.”