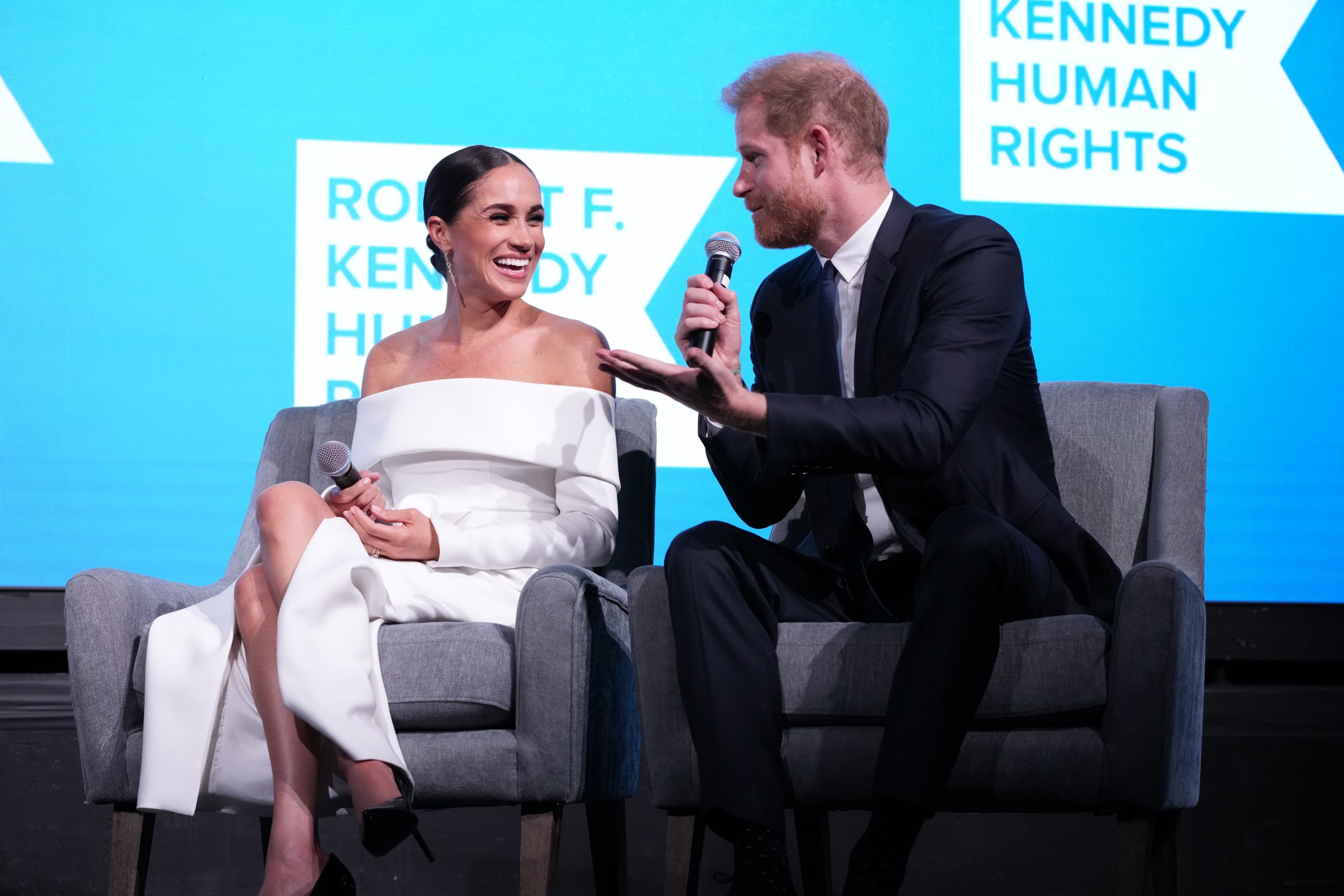 Harry and Meghan have dominated the headlines since the first three episodes of their documentary series dropped on Netflix yesterday (8 December), and the reaction from all sides has been as intense as expected.

But on a personal level, one of the most interesting facets of the series thus far was the candid way they spoke about navigating a relationship between two people of different races.

Harry addresses his own attitude towards race both before and after meeting Meghan, saying, ‘I thought I had an awareness to issues, ways of living, unconscious bias, all of it,’ he said.

‘But hearing her talk, sitting down and having conversations and chats, I was just like, well, here you are, just blissfully I guess sleepwalking through life.’

As someone who herself is in an inter-racial relationship – although I’d never really labelled it as such until just now – I related to that sudden and sometimes creeping awareness of the impact race has on your perspective on the world, and the effect it has on the world’s perspective on you, both as individuals and as a couple.

I grew up in the golden era of the romcom, where a clash of cultures was often used as a plot device to eke out the will they/won’t they until the credits rolled.

Films like Bend it Like Beckham and Save the Last Dance tackled racial and cultural differences in the context of romantic relationships, but rarely have I seen a real-life couple talk about the same struggle beyond the happily-ever-after.

To see such a prominent couple, from hugely different backgrounds, talk about such issues was as refreshing as it was relatable

In their documentary, Harry and Meghan spoke in depth about the ways in which race, culture and privilege affected their lives before they met and how it continues to play a role in their relationship with each other and their families.

Harry spoke about the ‘unconscious bias’ within his own family when it comes to understanding issues of race and Meghan spoke about the culture clash between her American self and her perhaps more reserved Royal in-laws.

‘Like I was a hugger, always been a hugger,’ Meghan said when speaking about meeting William and Kate for the first time, ‘I didn’t realise that that is really jarring for a lot of Brits.’

To see such a prominent couple, from hugely different backgrounds, talk about such issues was as refreshing as it was relatable.

When any couple embarks on a serious relationship, there’s bound to be a nervousness about two families meeting and the potential for a clash of cultures.

Whether that be the big stuff like religious or political differences – or the small stuff like how to pronounce the word ‘scone’.

Despite the fact that my partner is British Asian and I’m white British, he and I come from very similar backgrounds. We had similar upbringings and family units, similar values and life experiences. When our parents met, they got on so well that we were forced to sit and talk to each other for the night instead.

Race never played a part in our feelings for each other as a couple, but it is an intrinsic part of who we are and thus informs our experiences and viewpoints.

I’d read about the British Empire at school, but my connection to it was impersonal. My knowledge about the slave trade was limited to learning only about its abolition and, to my shame, I had never heard about the Partition of India.

This was when British Empire left India in 1947, having hastily drawn up new borders to create the state of Pakistan, which left families torn apart and gave rise to widespread violence between Hindu and Muslim communities.

It was only after I met Nikesh and we had conversations about our family heritage that I truly began to examine my relationship with Britishness and what on earth that even meant.

Similarly, as Netflix subscribers around the world tuned in to the Harry and Meghan documentary, it may have been the first time that global audience members learned of the delicate relationship between the Royal family, the press and the British people.

But for domestic viewers – especially white Brits – it’s the relationship between the Royal family, the Commonwealth and slavery that may have been the biggest eye-opener.

In the first instalment of the docuseries, writer Afua Hirsch and historian David Olusoga spoke about the Royal family’s historical relationship with slavery – or to be more accurate, the Royal family’s responsibility for slavery and colonisation.

The Commonwealth was something that I had been brought up expected to have great pride in and admiration for – not by my parents – but by the Royal family themselves. Whether that be from Christmas Day addresses or sitting round the TV to watch the Commonwealth Games.

I can only imagine how Prince Harry viewed it.

But as Afua Hirsch said so plainly in the documentary, the Commonwealth is simply the ‘Empire 2.0’. As author Kehinde Andrews put it, ‘nothing has changed’ from the UK’s colonial past, except that the Royal family now have ‘better PR’.

At school, I was told that Great Britain had abolished the slave trade in 1833. The focus was always on the fact that it ended, not how it started or how we took part in it and profited from it.

What I also wasn’t told, is that the UK taxpayer would still be lining the pockets of the descendants of slave-owners until 2015 in the form of ‘compensation’, a whole decade after my history classes in school.

The Harry and Meghan doc may be the first time that many Brits will have heard some of the unvarnished truth about our colonial past.

For Brits with heritage reaching beyond our small islands, it is a truth that may have sat with them for decades. I can only imagine how frustrating it must be to witness other people’s ignorance or wilful denial of our history.

That’s not to say the newly informed are expected to self-flagellate, despite what ‘anti-woke’ commentators will have you believe.

But when you are confronted with uncomfortable truths, you have two choices: reject it and be angry that the curtain fell, or accept it, be curious and open your mind to further education on the matter.

He spoke candidly about addressing unconscious racial bias, his past mistakes in wearing a Nazi uniform and his responsibility as a father of mixed-race children to be an active participant as an anti-racist ally.

Harry and Meghan’s experience, although unique in scale and the stakes at play, is relatable to all couples who know what it’s like managing cultural divides within a relationship.

As Harry states in the doc, ‘My children are mixed race, and I’m really proud of it.

When my kids grow up and they look back at this moment and they turn to me and say what did you do in this moment – I want to be able to give them an answer.’

I’m yet to have children, but knowing that if I do, they will be British with mixed heritage.

Like Harry,  I want to be prepared to answer questions about our history – their history – because it is a crucial part of the story of how we came to meet.