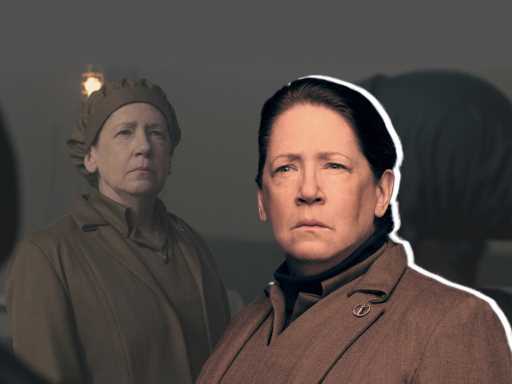 For the last few years, Ann Dowd has been terrifying audiences as Aunt Lydia in The Handmaid’s Tale. Off-screen, Dowd is quite the opposite.

The actress sat down with SheKnows to give us the lowdown on her ultra-evil on-screen alter ego. She confessed what she loves about the dystopian drama, why Elisabeth Moss is an “exception to the rule,” if redemption is possible for Aunt Lydia (nope, it’s not), and what her rose and thorn are about playing the most evil aunty on the Gilead block. Watch the exclusive video interview above to find out if Dowd believes Aunt Lydia loves Moss’s June or hates her.

Dowd revealed the one bright “rose” of being on this show is Moss directing. She explains that she is awe of Moss and watching her direct and being directed by her is “quite thrilling.” Given that Moss stars in the show, it’s quite a feat to pull double duty. Television showrunners have been known to discourage actors from taking on directing, and Dowd quickly says, “She is the exception to many a rule.”

Dowd went deep on Aunt Lydia’s psyche and explained it’s hard to compare her to a modern day politician. “Before I would have compared her to a right-wing blah-blah-evangelical… but it’s changing. All the things she thought were true about God, are not,” Dowd explains.

But does she think her character is capable of redemption? “Redemption is possible for all of us and Lydia is not excluded from that,” she said. Dowd hints that Aunt Lydia will have to “choose to keep moving forward or look in the mirror and have a breakdown.” Time will tell if Aunt Lydia will be able to change and realize what she’s done.

June and Aunt Lydia have a very complicated and contentious relationship, mostly because Aunt Lydia has enslaved and tortured June for so many years. Dowd breaks down exactly how Aunt Lydia feels about June, and let’s just say, she morphs into Aunt Lydia mode mid-interview, because she is just that good. And scary.

Watch the video to see her become Aunt Lydia before your very eyes. Plus, check out what co-stars Bradley Whitford and Max Minghella, and O-T Fagbenle told us about their storylines for the increasingly intense fifth season. The Handmaid’s Tale’s is currently airing on Hulu.

Before you go, check out the all-time best ‘Outlander’ episodes you need to watch.